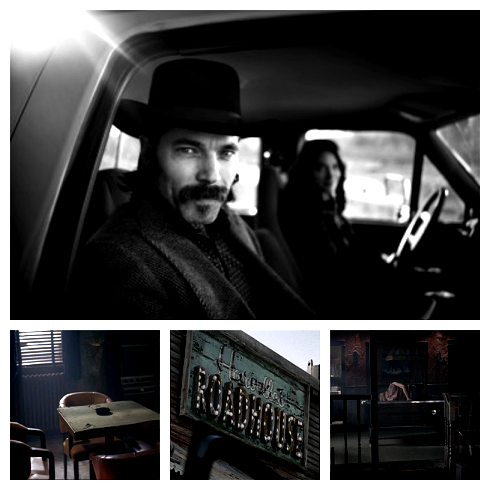 What: A birthday party for Doc Holliday
Where: Harvelle's Roadhouse
When: August 14th, 7PM until ___?

It's Doc's 160-somethingth birthday and getting to celebrate that fact seemed like a good opportunity that couldn't be passed up. Invitations were sent out to a small list of folks, but those folks were also allowed to bring guests though the place isn't exactly being shut down for the party either. So whoever wants to be there can be there, the more the merrier! There will be a couple of grills going outside where burgers are being cooked up and chicken is being barbecued. There will also be some corn on the cob, mixed fruit, and salad options provided because Wynonna decided to go just a little all out for this one.

Everyone would have been encouraged to bring a side to share, and if anyone's a vegetarian and wanted to bring their own food for the grill, that would be perfectly fine too! Two large coolers of ice cold beer would also be available for those of age (looking at you, Cass) but if you were wanting something harder, Jo would be happy to serve you. There will also hopefully be a couple of cakes to choose from for dessert, if not more!

Harvelle's basically resembles your typical hole in the wall small town type of roadside bar. It was known for being a place where hunters, truckers, etc. would stop for a drink, a meal, and maybe a nap from time to time before heading on their way. It has a full service bar, a pool table against one wall, a piano against another, a jukebox for some tunes/dancing possibilities, and a couple of arcade games (including Buck Hunter). There are bathrooms... and bedrooms... down the hall, but don't touch the room that has the “Dr. Badass is IN” sign hanging on it, otherwise Jo might have your hide. Consider this your fair warning.
CODE BY
Tags: !event post, -player: caitlin, check please: eric bittle, justified: raylan givens, marvel: erik lehnsherr, marvel: rogue, overwatch: brigitte lindholm, wynonna earp: doc holliday, wynonna earp: wynonna earp, ₴ inactive: cassandra cain, ₴ inactive: connor, ₴ inactive: dahj asha

valloic
How does one find a fitting gift for someone they barely know?

[Eddie + Losers who may know Connor through him]
Is there anything I can do? I'm so sorry.

valloic
I would never dream of doing this back home and I'm still not confident about doing it now, but I'm going to anyway. Vallo isn't anything like home and there's a lot more diversity of people here.

So consider this a Public Service Announcement.

It's weird to just put that out in the open. Please don't worry, I won't hurt anyone. Ravi has me connected to a supply of brains which keep me from going full Romero. I keep my nails short so I won't accidentally scratch someone. The last thing I want to do is make anyone else a zombie.

Also, please note that injury, fear, basically anything that spikes adrenaline will cause what I refer to as "full-on zombie mode." I'm still not dangerous then but I will look like the monster I am (red eyes, veiny face, superhuman strength).

valloic
So I mentioned my clinic, but a little more about it.

It's located in the city and will service anyone that needs help and healing. I need help with the clinic (doctors/nurses/healers/interns/receptionists/janitorial) and, separately, I'm also keeping a list of people on hand for whenever there's a widespread need for doctors/nurses/healers.

I had the following people volunteer last time. Please let me know if you're still interested/no longer interested or if someone's no longer around.

And it was brought up last time, but I'm offering classes on first aid and sex ed. First first aid class is this Saturday at 10 AM. Sex ed will be Sunday 2 PM. I'm also taking suggestions for the clinic's name. I also had a few people offer up to acquire supplies, so if that's still on offer, please let me know.

valloic
I need some fashion advice if anyone here is an expert.

[MAEVE]
I have an odd question for you.

valloic
So Artoo has, helpfully, informed me that no one here, or next to no one here, understands him. He's actually feeling a little lonely. He's used to having other droids around or people who can understand him. In the absence of that he always had Threepio around to translate for him.

I was sort of injured in that whole giant bunny thing which means I have some down time. I'm not sure if it's possible or not but, if anyone's interested, maybe I could try and teach you how to understand him. He might appreciate having someone to talk to other than me.

DAHJ & CONNOR
Plus, it was just good to have the company.

WHAT: it's strange not understanding what you are.
WHERE: their apartment (Connor says she can share it as long as she needs, androids be androiding.)
WHEN: July 12th.
WARNINGS: tbd.
STATUS: Completed( Read more... )

valloic
Never get bored, Google yourself, and read fanfiction written about yourself.

valloic
CONNOR
I wanted to thank you for giving me a place to stay and for helping me.

If it's easier I can register and get my own place? I don't want to take advantage of your hospitality.
Tags: ₴ inactive: connor, ₴ inactive: dahj asha

valloic
They said I should introduce myself here but I don't know what to say.

Hi, I was never alive to begin with?

I watched the video I'm just struggling to understand what's happening or how I ended up on this world.


Your technology is so

I think I might be a danger to others. I don't know what I should do next.
Tags: doctor who: river song, the raven cycle: noah czerny, tvd verse: caroline forbes, ₴ inactive: connor, ₴ inactive: dahj asha, ₴ inactive: emma swan, ₴ inactive: maeve millay

Nearly burning down the house trying to make a Thanksgiving dinner.

Things I am missing:

Black Friday. I need new boots and do not want to pay full retail thank you very much.