World's Finest "Romance"!
AKA, Cass Cain gets a crash course in physical attaction, love and lust.

Noticing that Cass isn't exactly on her game (in this case being unable to beat up a terrorist with elemental wind powers), Barbara and Bruce decide that she needs some time off.

This involves sending her on a cruise on Bruce's dime, with Barbara making her wearing a bikini... for some reason, 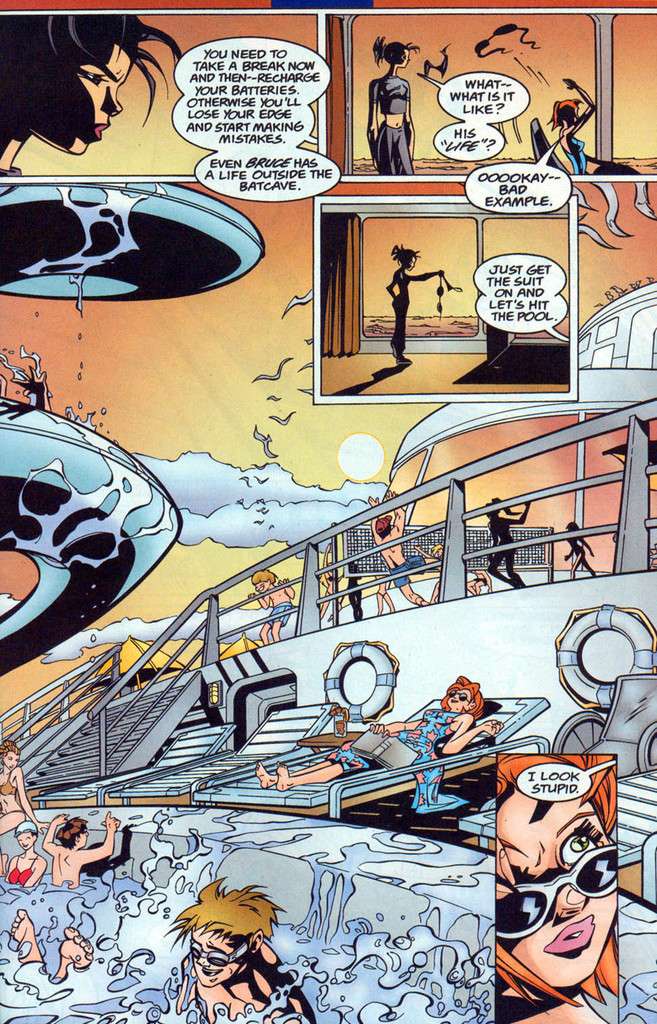 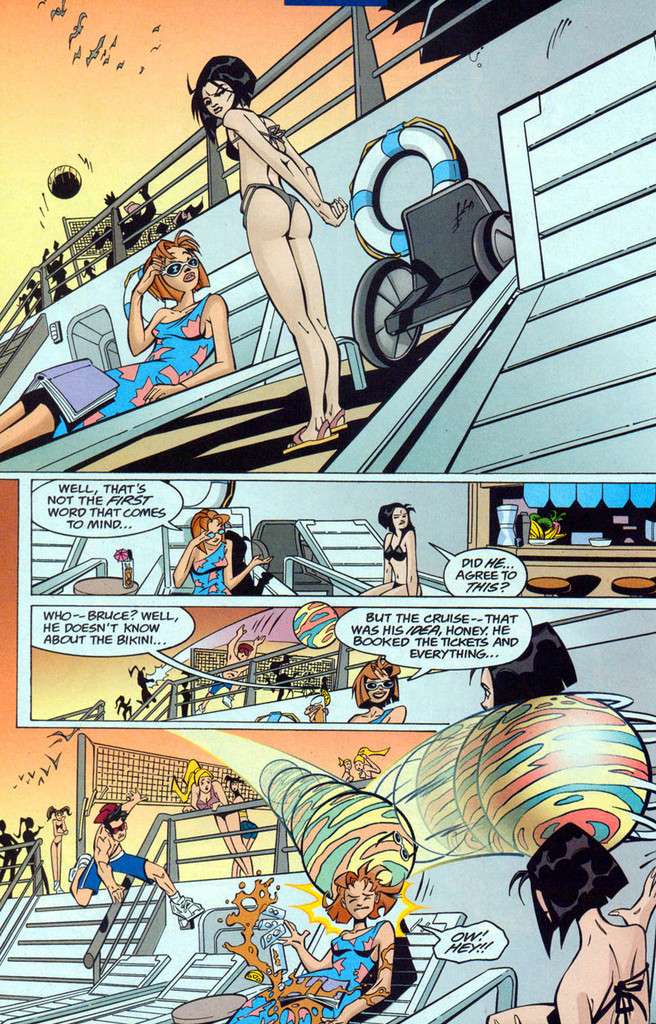 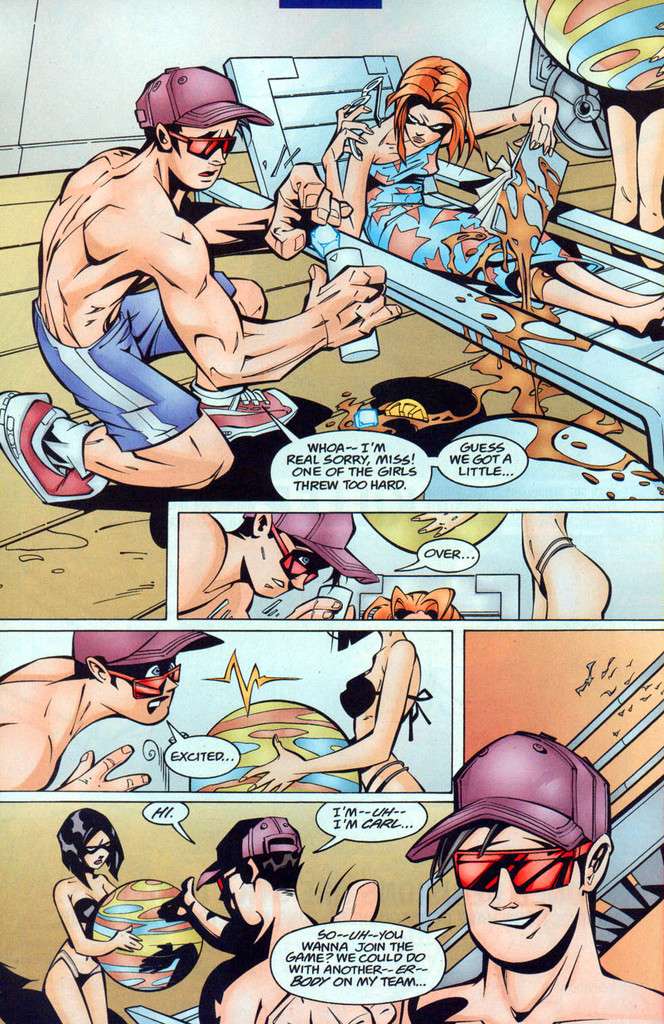 That's Superboy that is, if you don't get it. Wow, that water looks oddly viscous, like they're swimming in vaseline. Also, fanservice generally works better with good art.

Cass has wondered off, and is taking her frustration out of a harmless punching bag, 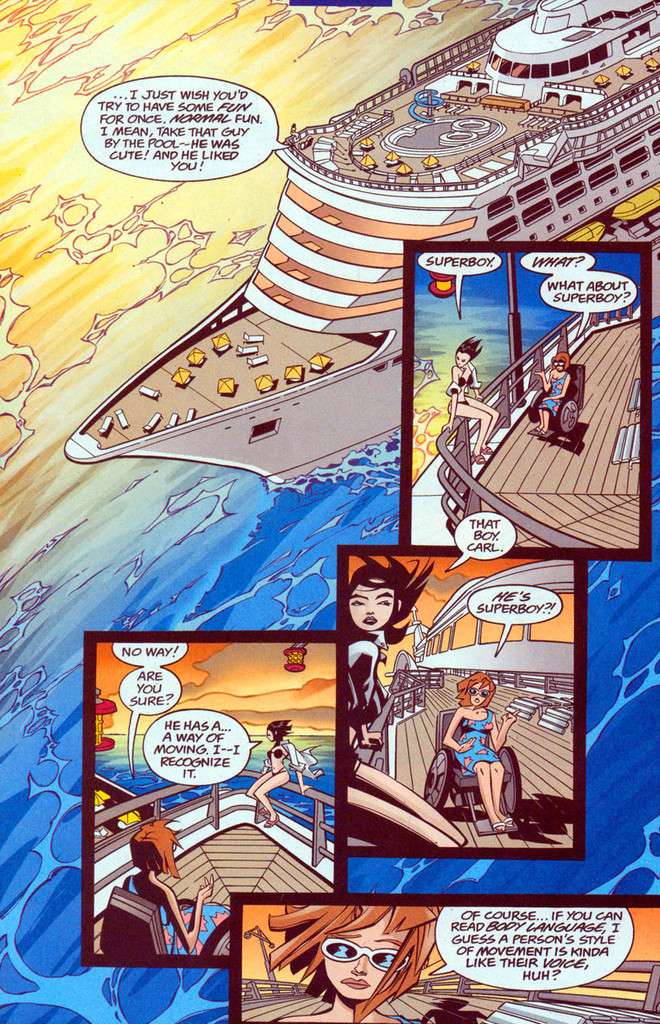 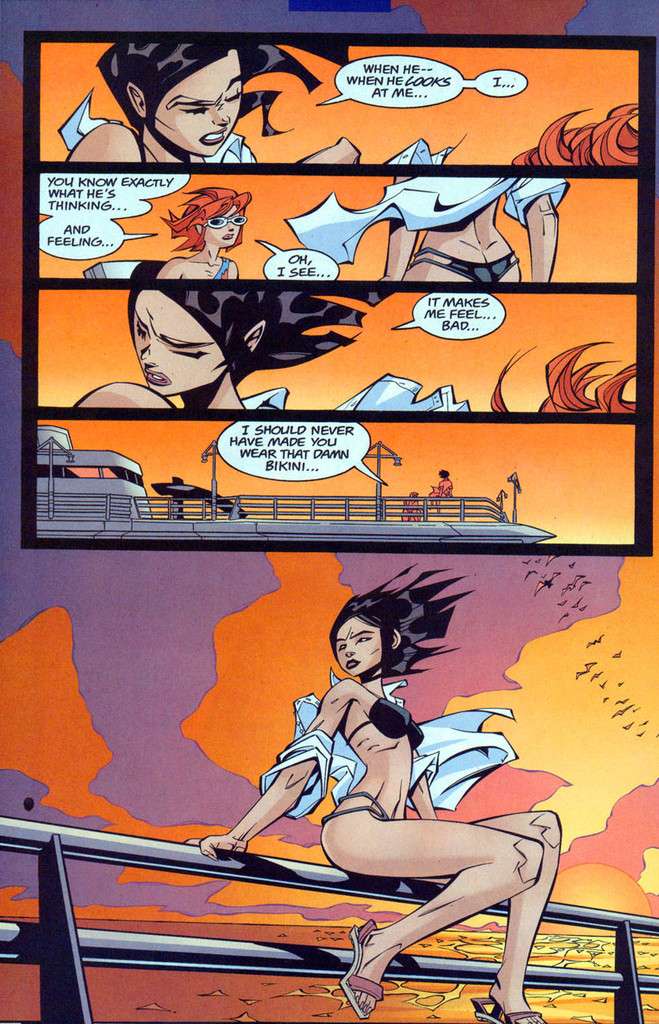 Bruce calls Barbara to get a progress report, 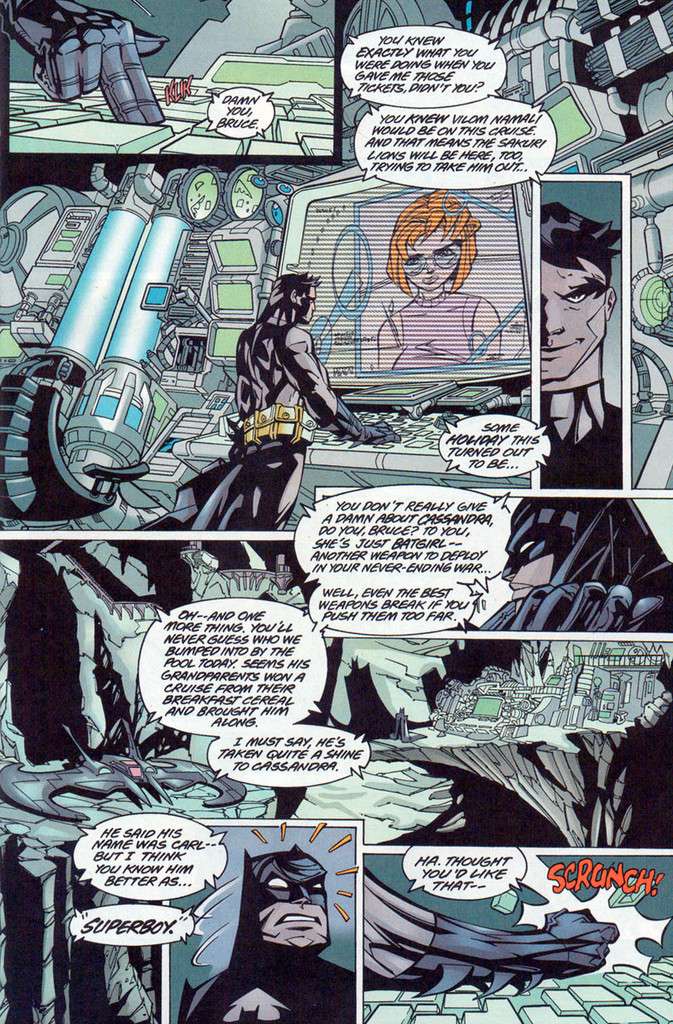 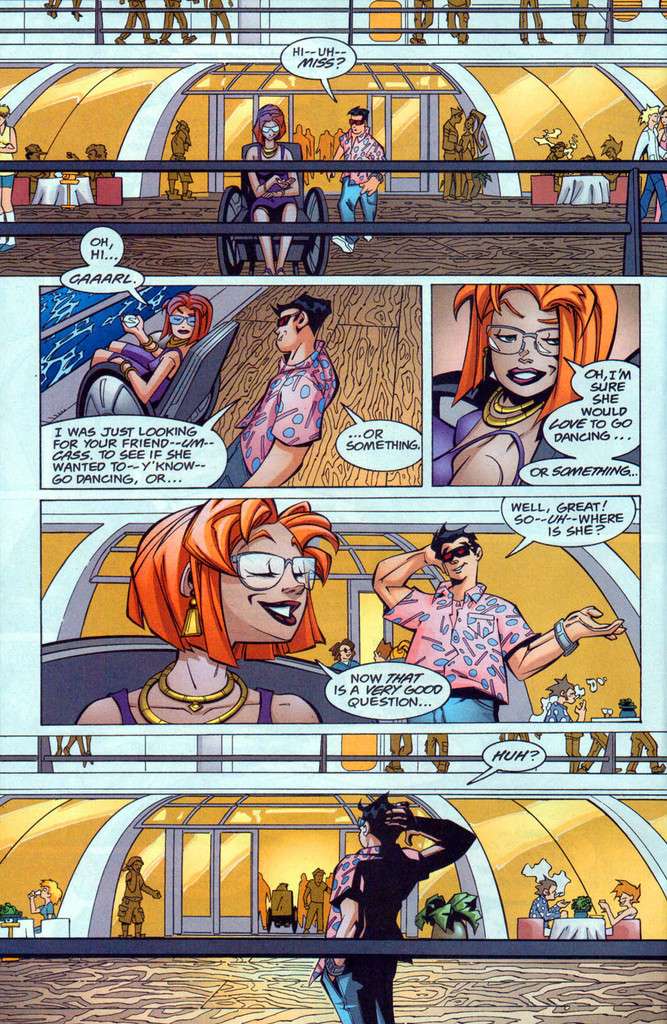 Jeez Barb, why are you acting like you're drunk off your ass? Dressing your teenage ward in revealling clothes, taunting your boss/mentor, flirting with teenagers...

Anyway, Cass is off having Sexual Tension with the windpowered terrorist who apparently got her interested in boys. The guy, called Black Wind, is revealed to be on the ship because the dictatorial ruler of his country is also there, and Black Wind wants to hold him hostage.

The result of this is Cass, Superboy, Black Wind and the dictator's superpowered bodyguard getting into a four-way fight with each other. 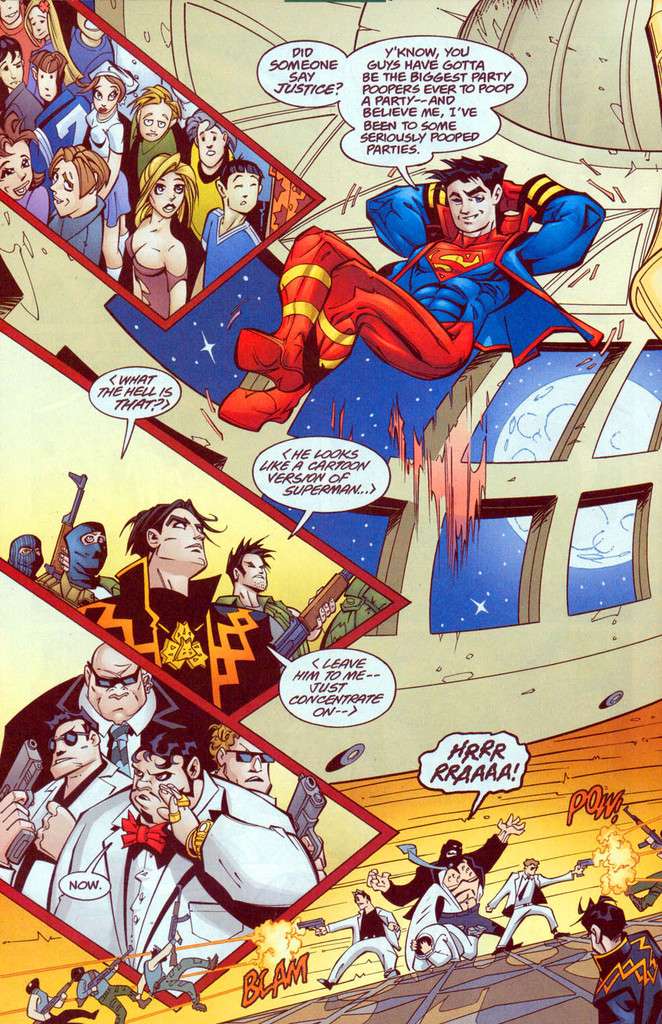 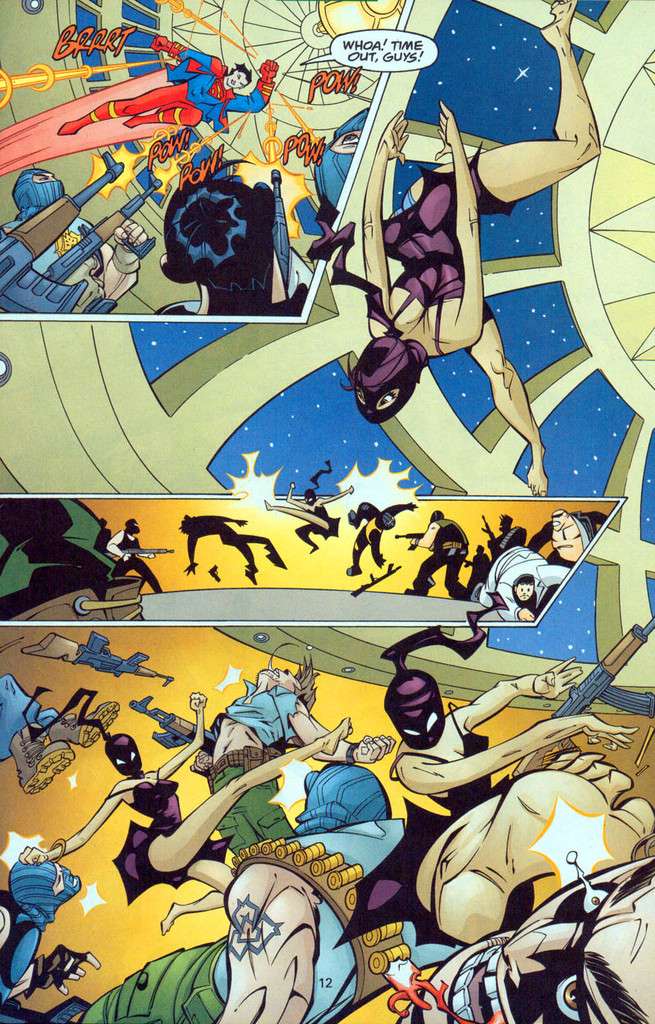 Conner works out who Cass is, 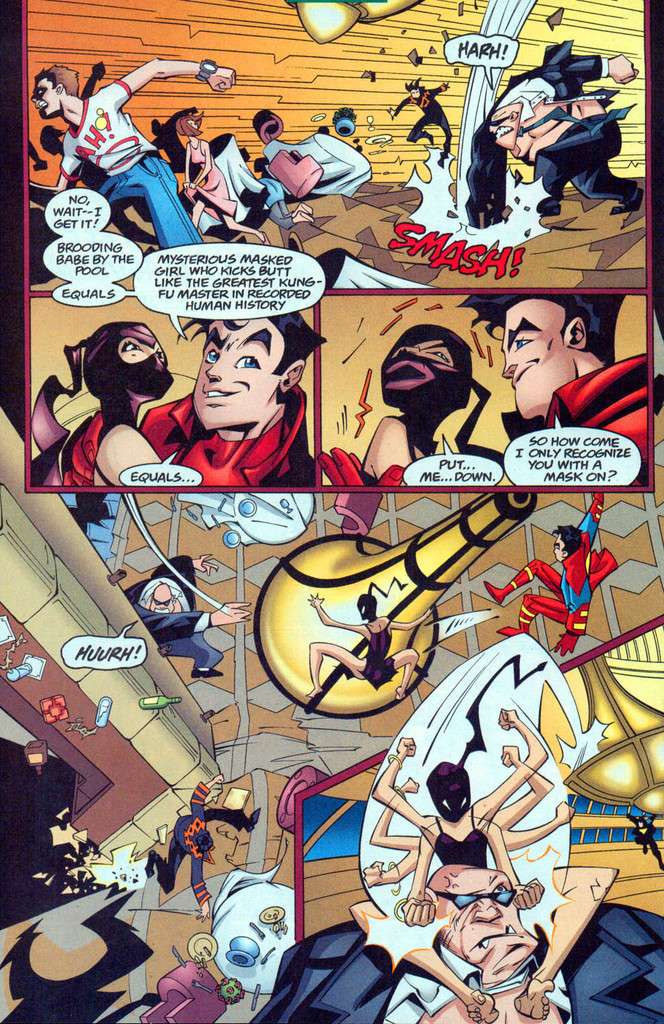 Anyway, Cass beats up everyone, and she and Black Wind are thrown into the ocean. 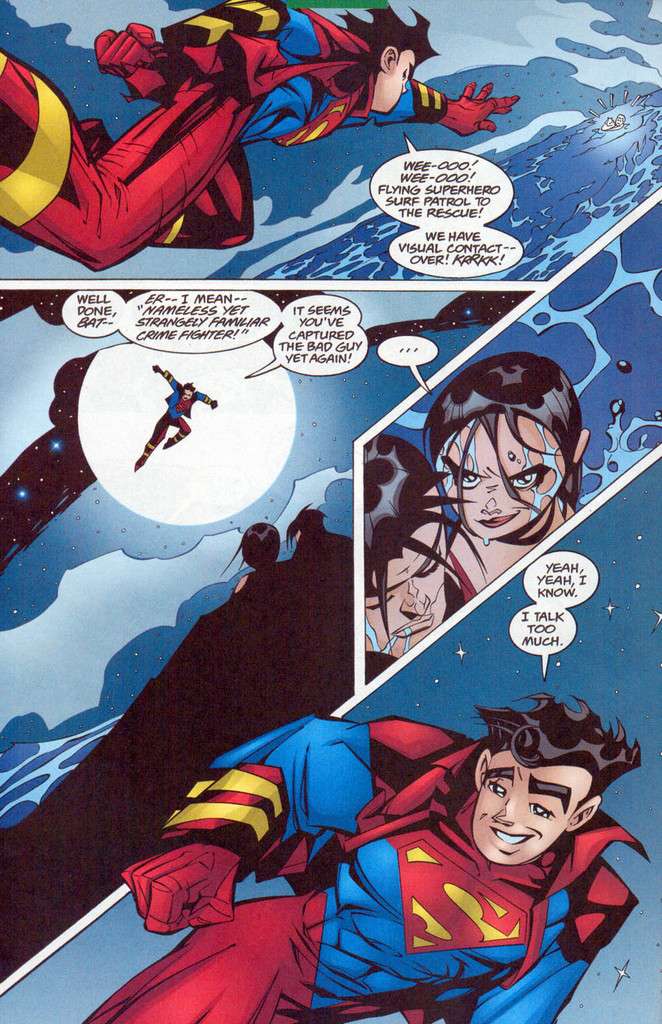 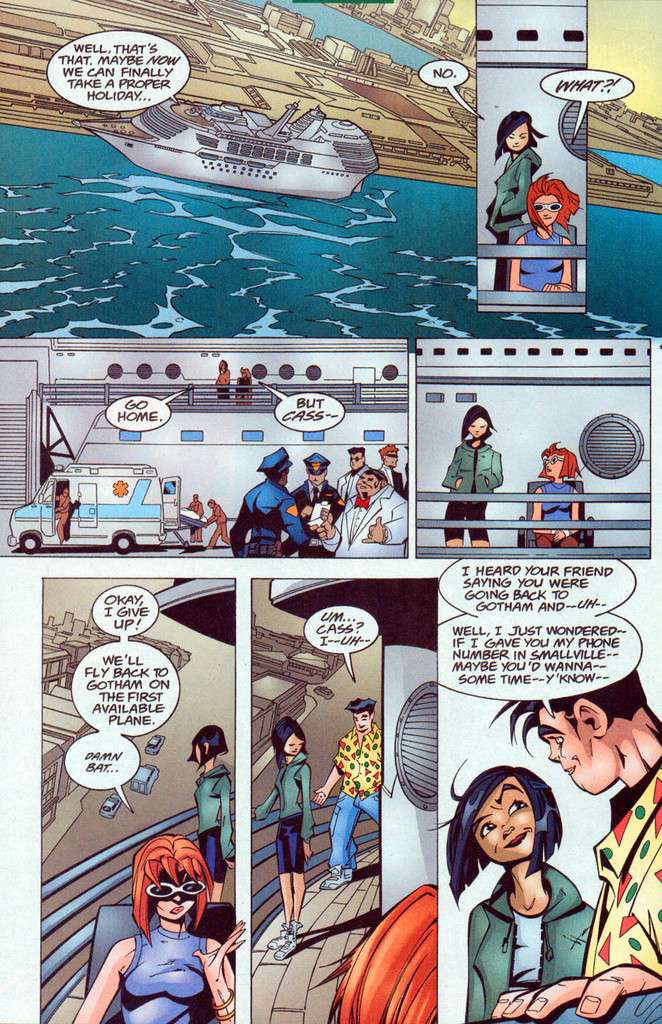 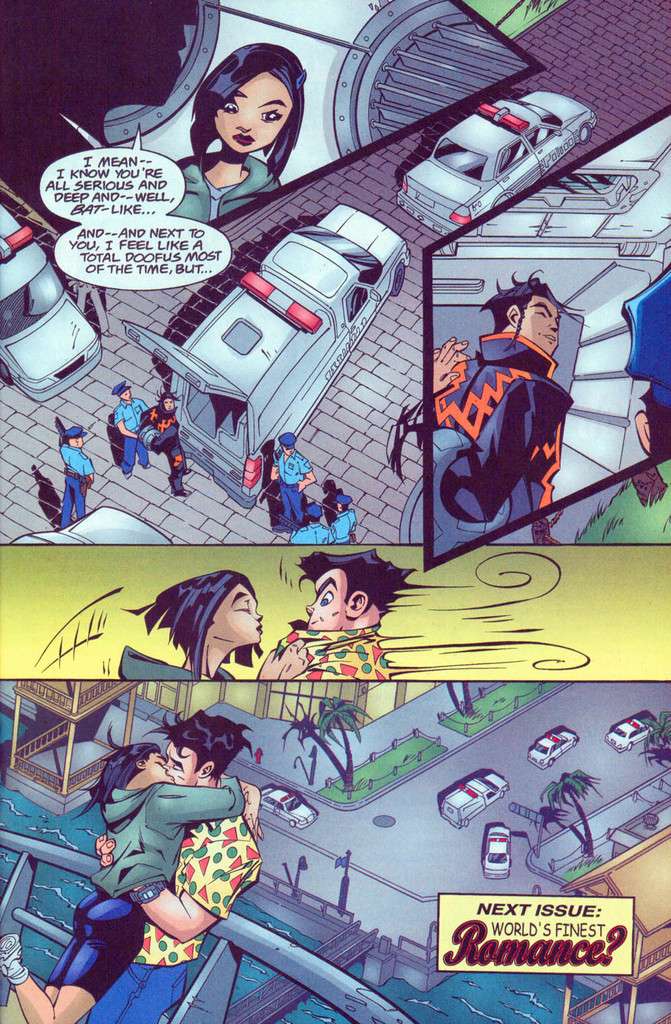 Cass is in her cave, and can not sleep. 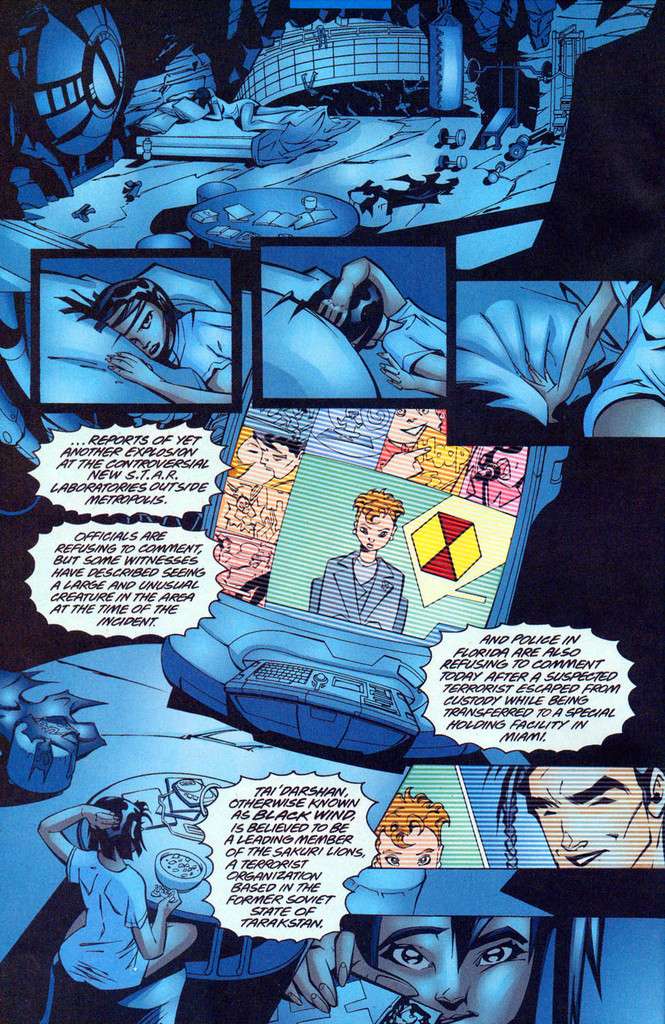 Deciding that now isn't really the time to talk to Barbara, Cass goes for a patrol... which doesn't help. 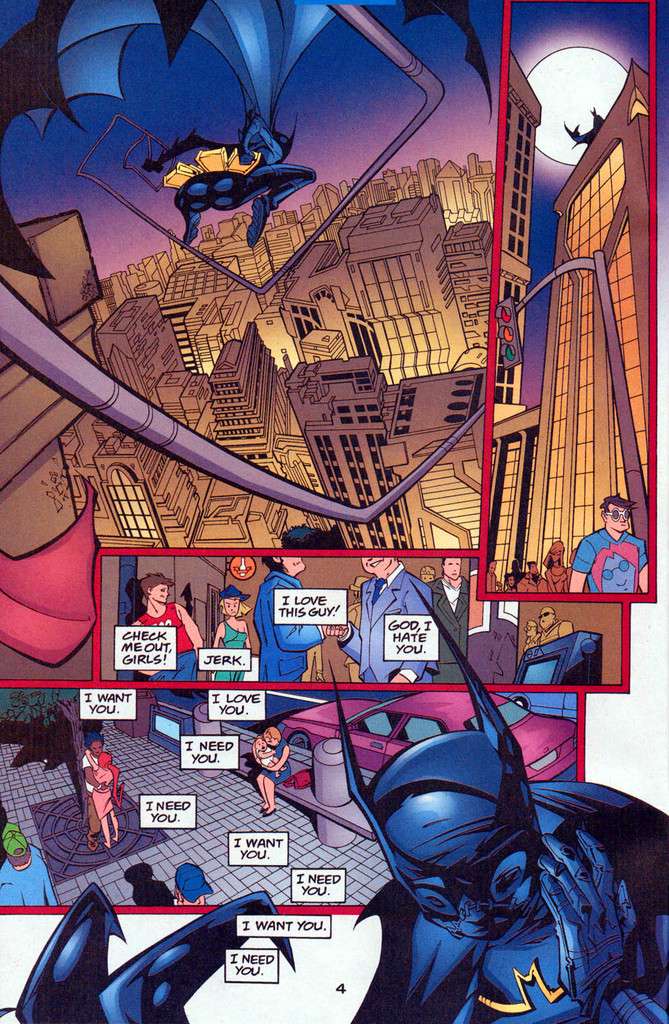 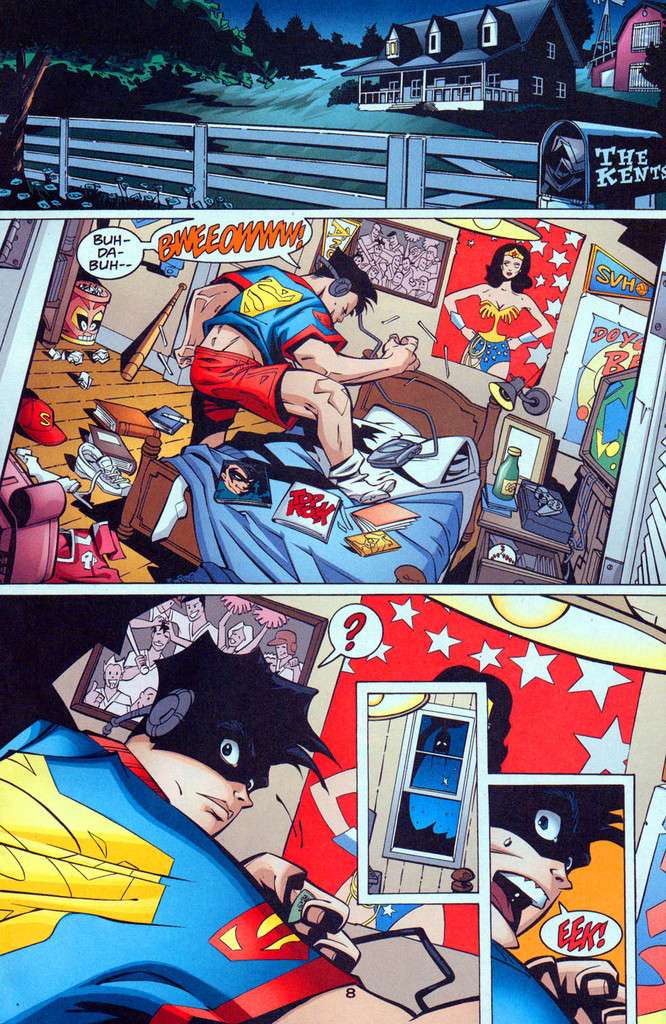 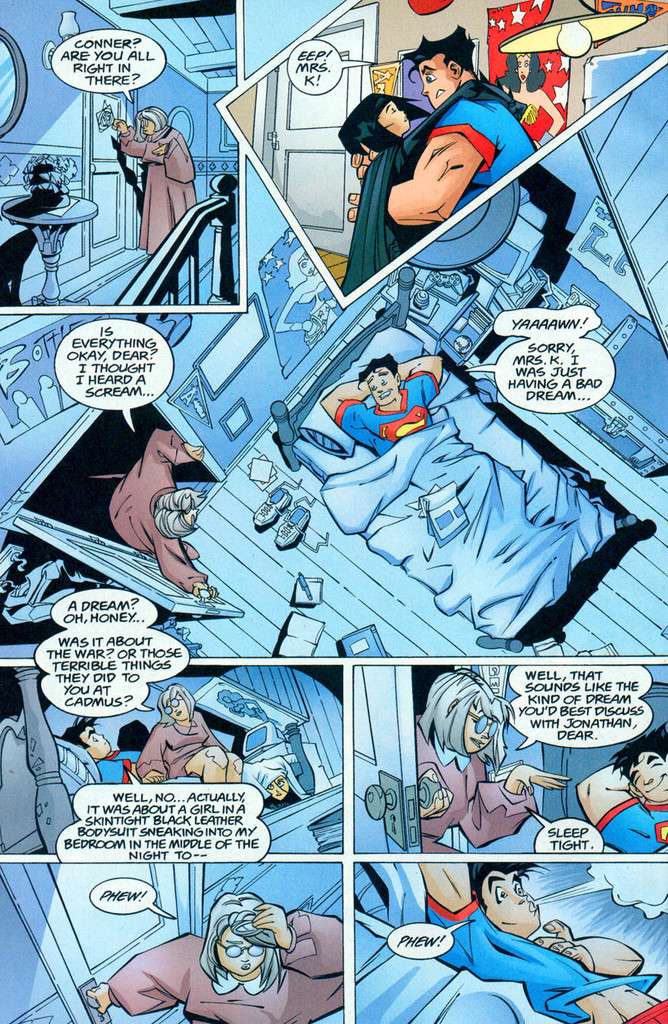 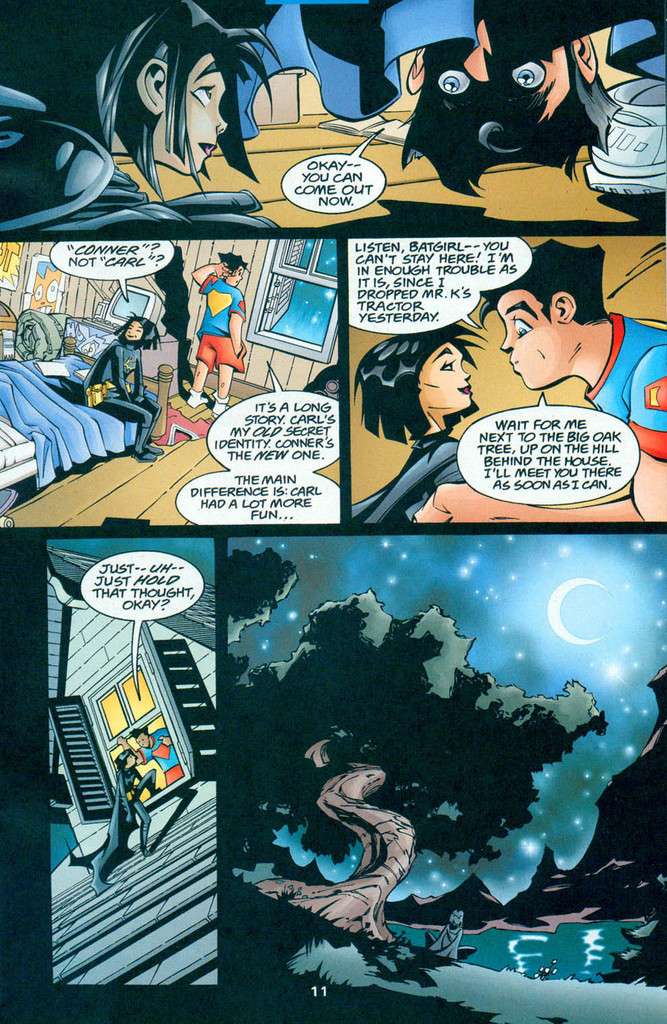 Conner decides to do something romantical (using his "tactile telekinesis" to make a castle in the clouds), but numerous things like a plane and a giant Lovecraftian space-slug appear to mess things up.

Cass eventually works out that the alien spaceslug isn't actually out to attack people though, and that it's just lonely. 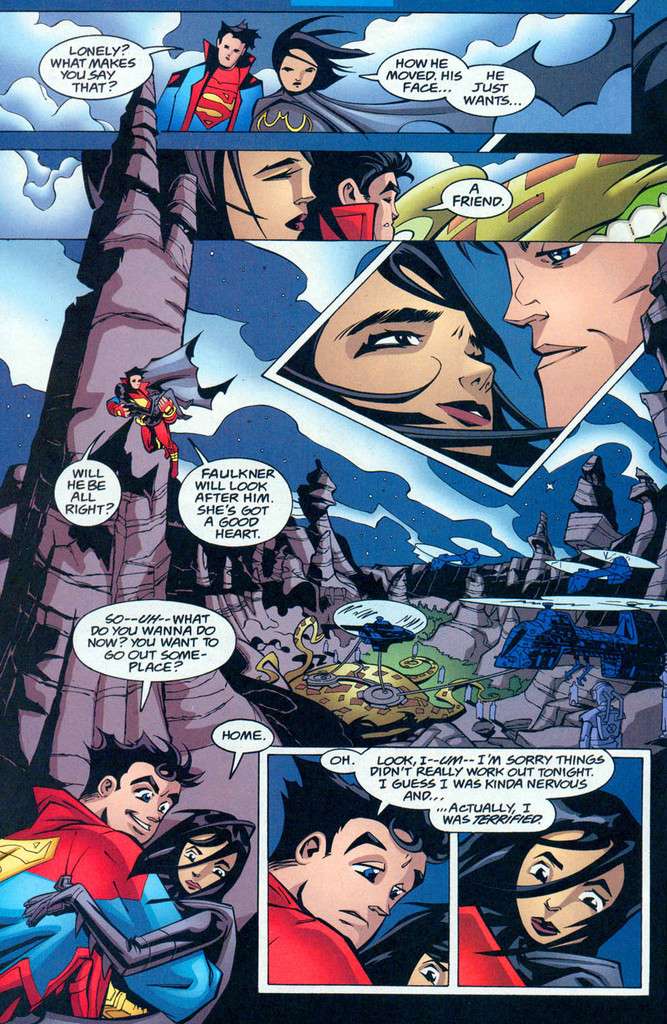 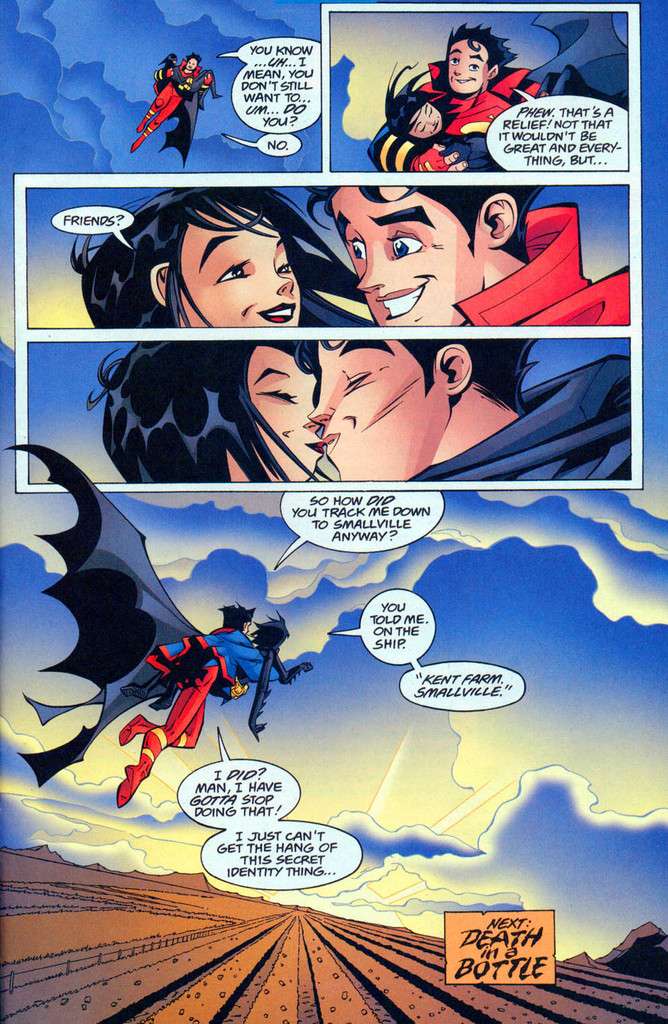 And so they decide to be just friends, and it's referenced later on in Infinite Crisis when Slade and Rose impersonate Bruce and Cass, leading to Conner inviting "Cass" to join the Titans.

Suddenly I feel even worse for Cass, because she lost just as many people as Tim (Steph, Conner, her supporting cast in Bludhaven and the entire city Bruce gave her to look after), but she didn't get the support that Tim received either. *sigh*