Blackest Night: Solomon Grundy
This development was predictable, but still interesting how it the story unfolds.

IGN has the preview for Solomon Grundy #7. 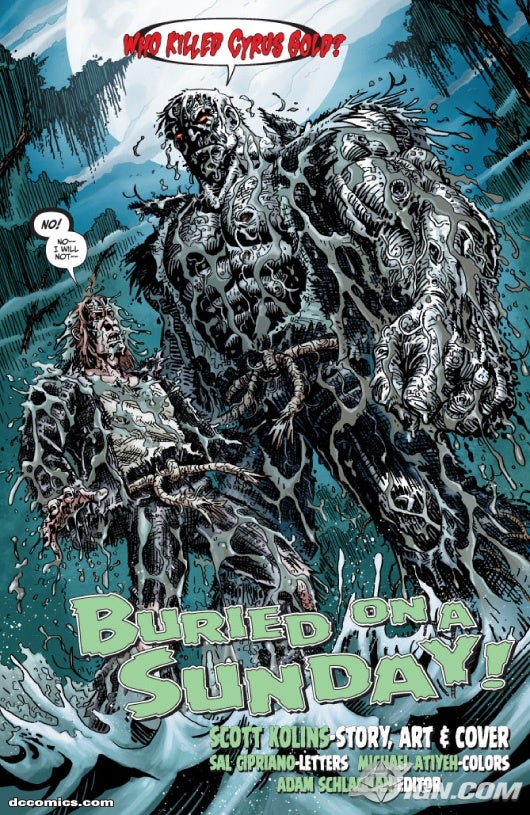 This must be DC's version of Hulk meeting Banner in real life. But evil.

As I hypothesized above, The current Black Lanterns may be new and improved versions of what Solomon Grundy is... evil inhabiting a shell of a mortal man. This is important on several levels because

a) Solomon Grundy must have been the prototype. Wild, unrefined, unfocused. Whatever foul black goo is reanimating Grundy, something similar must be in the Black Lantern rings and Scar herself. That ebony energy that reanimates the dead (but soul less) is harnessed and into a ring, much like the Zamarons focused the Star Sapphire crystal into rings, modeled after the GLs.

b) The reanimated dead retain their powers and knowledge, unlike the chaotic Grundy. Again, refinement in the reanimation process. And they heal like Grundy, too. That is why braining them won't work.

c) The souls of the Black Lantern may be able to act separately from the reanimated body itself, as Cyrus Gold is. The souls need to have the right conditions to return to confront the bodies.

d) The dead are rising because they still have issues left unresolved in life. The Doves are currently immune because they can be at peace with
being dead. The Doves have no issues left unresolved, no emotions left to powering their bodies. If Cyrus can resolve his issues, he will be at peace. If not, then the Black Lanterns have a permanent agent in the world of the living