Life and Times of Scrooge McDuck, Appendix 2: Scrooge & Family
It's been a while, I know, but finally -- here is the fourth and final installment in my "Life and Times of Scrooge McDuck" series! If you remember, the first two posts covered Scrooge's rise from poor showshine boy to the World's Richest Duck, as chronicled in Don Rosa'a magnificent twelve-part epic, while the third post (the first of the two appendixes) examined his stormy romance with Glittering Goldie O' Gilt, as told in additional comics by Rosa -- and of course by Carl Barks, Scrooge's creator.

In this second appendix, we'll take a closer look at the one thing Scrooge didn't get to really experience until he was an old duck, namely family, and how he finally got to be properly part of one.

Here, in all its glory, we see the official Duck family tree. (Click on the image for a full-sized version!) 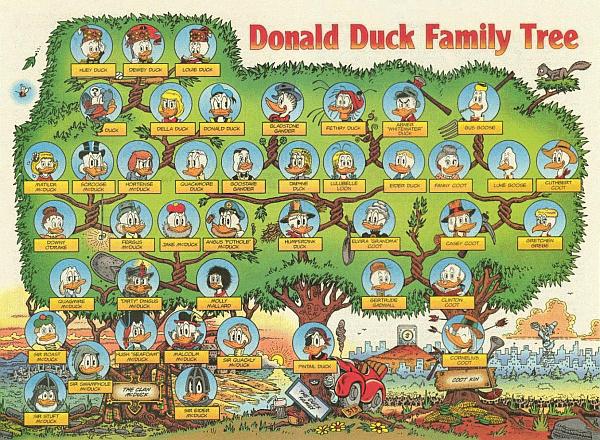 As you can see, the only one completely unaccounted for here is Huey, Dewey and Louie's father -- no information exists on him anywhere, apart from one single thing: He was once hospitalized when a firecracker exploded under his chair, and it was because of this event that the boys came to stay with Donald. We don't know anything else about him, not what happened to him or even what his name was... and at this point, the mystery of his identity is such a big running gag among Disneyologists that it'll probably never be revealed.

But enough about him. Most of the characters shown here are very minor characters, some of which have only appeared once in one single comic and then never again, or even just alluided to in some places -- seems like in modern times, with the aging Scrooge in Duckburg, most of them have either died, moved out of town or just vanished without a trace.

If you remember the earlier posts, Scrooge spent decades globetrotting and earning his fortune the hard way, becoming a damn awesome adventurer in the process -- but at a cost: He also became tough, embittered and cynical, caring for nothing but money and profit. After he returned home to Duckburg, he managed to tick off his entire family with his despicable behavior, causing them to break all bonds and refuse to talk to him again. Shortly after this, he retired from the world, spending his days as a lonely and grouchy old man in a huge mansion, forgotten by everyone and too angry and proud to reach out a hand.

Until one Christmas that changes everything.

Yes, people, this is finally where we get the story behind the "sleeping with bears" remark that Scrooge made back in the second post of this series -- because here, we see the very first appearance of Scrooge anywhere, namely in the 1947 comic Christmas on Bear Mountain, (20 pages), written and drawn by Carl Barks: Of course, the entire thing is just a set-up by Scrooge, who isn't at all out to give out something for nothing -- what he really wants is to play a mean-spirited prank on Donald, whom he's convinced is a lily-livered coward and doesn't deserve to be called the nephew of the great Scrooge McDuck:

Of course, as often happens, things don't go as planned, and unbeknownst to Scrooge, a couple of real bears (woken up from their hibernation by Donald's chopping down of a Christmas tree) invade the mountain cabin, and Donald and the boys are forced to tactical thinking in order to get rid of them.

And this is, of course, the point in the story where Scrooge enters the cabin in his bear costume and gets a real surprise:

What do you know, maybe family members aren't as bad as all that anyway! And it's this event that causes Scrooge to invite Donald and the boys for dinner the next day. ....but we've already seen this one. Let's continue.


From this point on, Scrooge returns to the world and takes up his businesses again, discovering to his joy that spending time with his nephews rejuvenates him, putting him back in touch with his old gung-ho adventure spirit -- which of course leads to countless comic stories and even a cartoon series where he takes them all around the globe, searching for treasure... though DuckTales isn't really canon to the comics, mind you -- a lot of the episodes there are directly based on old Carl Barks stories, but with a slightly different twist on them, usually including the removal of Donald and the addition of other characters like Launchpad McQuack and Fenton Crackshell. So I tend to view DuckTales as an alternate universe.

Of course, Scrooge remains stingy, miserly and hard-hearted, to the point of sometimes becoming the villain of the story -- and of course, he wouldn't be Scrooge if he, now that he does have a family, didn't exploit it to the fullest, by treating them as the cheapest possible work-for-hire, inviting himself for dinner whenever it's convenient (for him).

Still, when the chips are down. Scrooge knows how lucky he is to have been given a second chance at having a real family -- even if he doesn't admit it to anyone else. Heck, he barely admits it to himself.

But even after all this, and especially after having read The Life and Times of Scrooge McDuck, the reader is left with one question: What really happened to the rest of the McDuck clan? Is Scrooge really the only one left of the old family?

Well -- to answer that, we turn to the Don Rosa story, A Letter From Home, (34 pages) where Scrooge and his nephews re-visit the old Castle McDuck in Scotland -- once again in search of treasure, of course. This time it's the treasury of the Templar knights they're after, a treasury which Scrooge and the boys discovered in an earlier Rosa story (The Crown of the Crusader Kings, which I'm not presenting any scans of here... you kids need to discover some of these stories for yourself, after all) might be hidden somewhere on the old McDuck property!

Since Scrooge left Castle McDuck in his youth and his father passed away, it was looked after by a caretaker called Scottie McTerrier, but he's recently died (something which was revealed in the Barks story The Old Castle's Secret, which this story is a not-quite-sequel to), and in the later years the caretaker has been someone else...

Yes, it's Scrooge's sister Matilda! (Originally, Rosa wanted to use Hortense in this story, but Disney balked at the idea of using Donald's mother in a present-day comic, so it ended up being Matilda.) And it seems like the classic McDuck temper and pride is just as present in her as it is in Scrooge, as their reunion is anything but heartwarming:

The villain here, who was also the villain of The Crown of the Crusader Kings also the director of the International Money Council and views himself as a modern Templar knight. The stone he's holding is the Philosopher's Stone, which Scrooge found in an earlier Barks story (The Fabulous Philosopher's Stone from 1955, several decades before Harry Potter and friends played wizard chess in order to recover the Stone), but had to give up to the International Money Counsil because it would upset the entire world economy if someone had a stone that could turn any metal into gold. Oh, and Scrooge himself was also almost turned into gold because he kept exposing himself to the stone, but that's neither here nor there.

Whew! This story has a ton of references to old stories, but I think I managed to sum it all up so that we're all more or less on the level with the situation.

The director uses the Stone to turn the lock into pure gold, which is soft enough that he can break in the door with little difficulty, and then we get a treasure hunt, a chase, and several intricate old puzzles and traps to overcome, before everyone finally reaches their goal... You know, I could just have posted this page instead of all those Life and Times of Scrooge Mc Duck posts... then again, scans_daily would have been bereft of several really awesome scenes, so never mind.

And here we see Scrooge finally admit to someone just how much his family means to him. Way to go, old duck -- it only took, uh, slightly more than sixty years. Or possibly eighty. I don't even know just how old he's supposed to be, so let's leave it at that.

And so, brother and sister make up, there's not a dry eye in the house, and the last of the Clan McDuck have finally reconciled after all these years.

When I started this series of posts, it was my hope to show just what an awesome character and action hero Scrooge McDuck really is, and how he deserves just as much credit for sheer coolness as just about any superhero out there. After all, even the Indiana Jones movies were inspired by Carl Barks's "treasure hunt" comics with the Ducks (s'truth! You know that famous rolling boulder? Directly taken from the Scrooge story The Prize of Pizarro, and the trigger mechanism -- removing the idol -- was taken from another Scrooge story, The Seven Cities of Cibola! George Lucas has openly admitted that it was an homage to the Barks stories).

This last part was not so much with the awesome action scenes, but hopefully it has entertained anyway, and helped to show the multi-fqceted personality that is Scrooge McDuck.


But hang on! The story's not quite finished yet... And I know this is supposed to be about Scrooge, and it might not be completely fair to end these posts on a scene that doesn't even include him... but I'd never forgive myself if I didn't include this half-page, which includes the most shocking revelation of all:

Donald used the Holy Grail to knock the villain out cold.

Donald used the Holy Grail to knock the villain out cold.

And not only that, but he BROKE THE GRAIL IN THE PROCESS!!!

You know, this just about beats everything Scrooge has ever done. I don't know whether to declare this Donald's Crowning Moment of Awesome, the single worst thing any Disney hero has ever done, or both, or neither.

Luckily, he didn't turn into a pillar of salt, so hopefully he got off. Or managed to fix the Grail.