Tweak says, "You're that pinball wizard!"

Super Steph Series pt 7- Steph and Cass: Best Friends 4evah
I love Steph. I love Cass. And their friendship is my favorite one in comics. They're just very different- Cass is quiet, Steph can't shut up, Cass is super super good at martial arts, Steph is always messing up, Steph clowns around, Cass is serious- and yet the same- they're both very determined, good hearted people, they both have daddy issues, they both don't quite fit in....and they benefit from each other. Steph benefits from Cass's knowledge and training, and Steph teaches Cass about interacting with people, and being a teenage girl. Also, Steph is the only one probably, who wasn't ever afraid or in some way intimidated by Cass's traumatic past. She was able to LAUGH with Cass about it. The two are just so perfect and awesome together.


Here is their first amazing team up. Cass found a note on a man who was murdered by a gang, and she can't read! 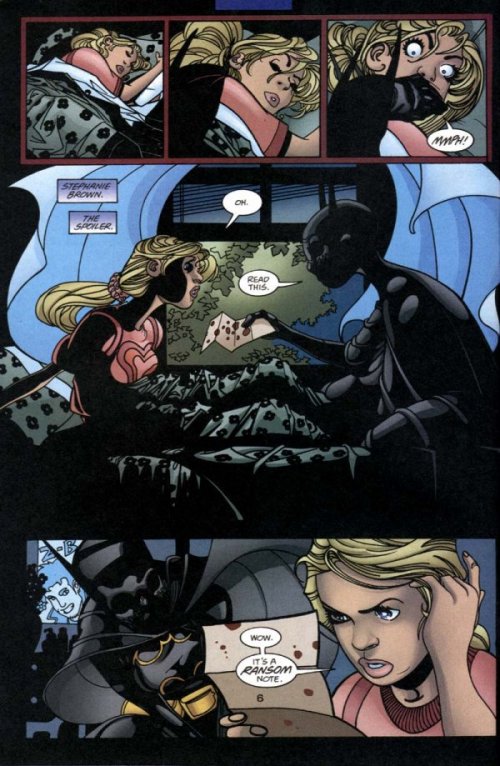 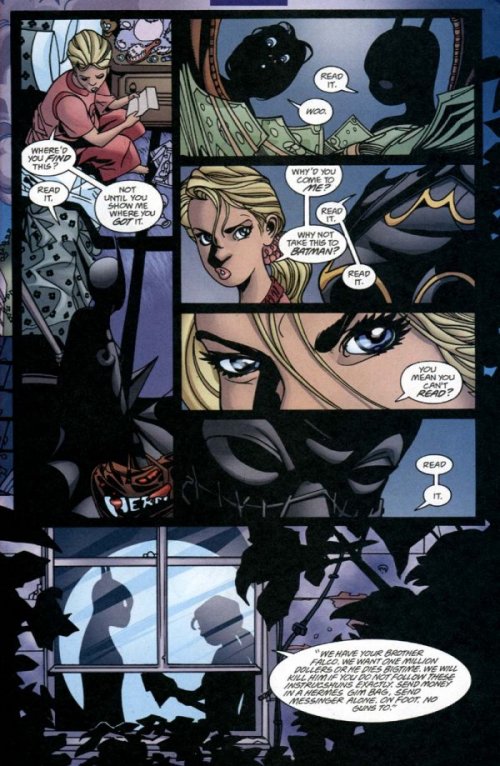 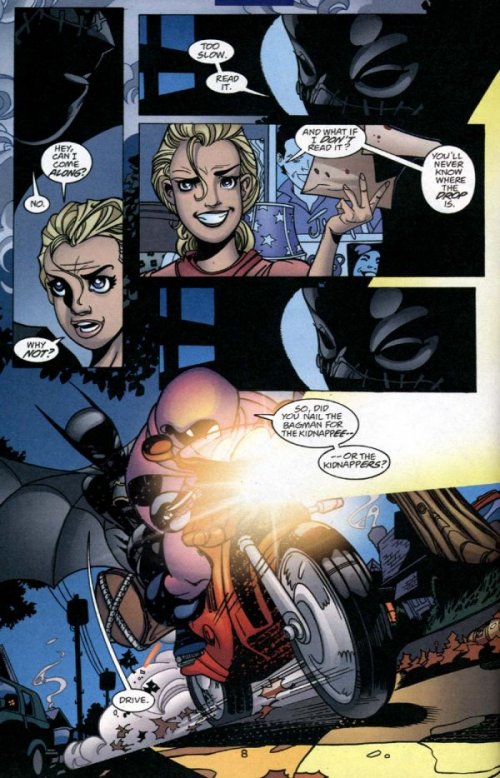 You can see from Cass's glare there she seriously considered beating the location out of her. 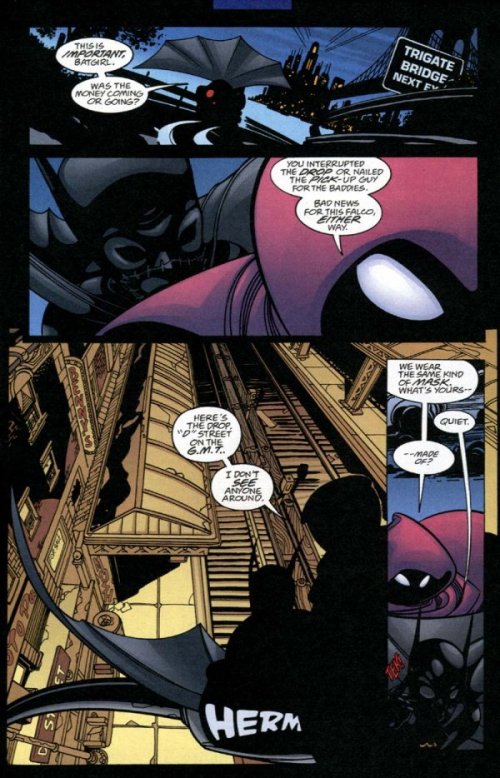 Anyway, plot happens, but it's not important, Cass and Steph track down the ransomers and save the day, and we have this little bit at the end.

I really like that moment. Especially Steph realizing she could use the money to improve her lot in life, but deciding to give it to someone who needs it more instead. Proves what a good heart she has.

So the seed for friendship is planted, but not cemented until an issue later...when Steph walks in on Cass, who has worked out to the point where she barfs on the floor in front of Steph when Steph startles her. Oracle said to use the tunnels. This is during the Last Laugh crossover, and Babs wants Steph and Cass to stay safe in the clock tower while the Jokerized villians are loose.

Aw. Though of course, Cass doesn't want Steph to see her obsess over Lady Shiva (this is before their big fight)

The Shadow Thief has broken into the clock tower! Cass very awesomely catches the shurikens Shadow Theif throws at all three of them, and...

Cass and Shadow theif take it outside, and Cass commits much badassery, as usual. Meanwhile, Steph is very anxious to help, but Oracle says no.

Bet Steph washed her mouth real good after that. Except...she has her mask on. Somehow she is doing mouth to mouth through her mask. Okay.

And so the friendship is cemented. Steph does Cass a major solid, both helping her out and keeping her secret, and Steph sees that Cass has emotion and humanity under all that toughness, and sees a friend in that.

WRONG BABS. Steph will not get a case because, uh, Batman suspected all along! That's it.

Anyway, Harley is in troube because Mistah J has randomly decided to have kids before he dies, but Harly doesn't want to without a ring on her finger like a good girl, so Joker sends Jokerized Phobia, Killer Frost and Carnivora after the lady, so Steph and Cass must roll. 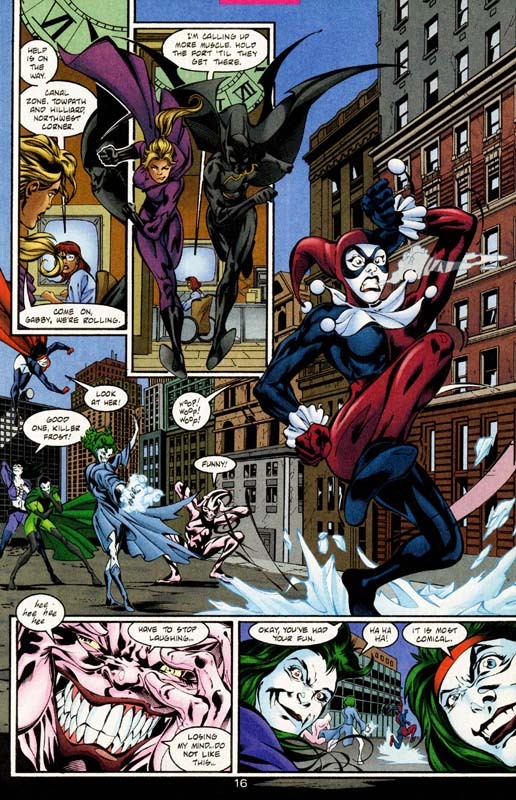 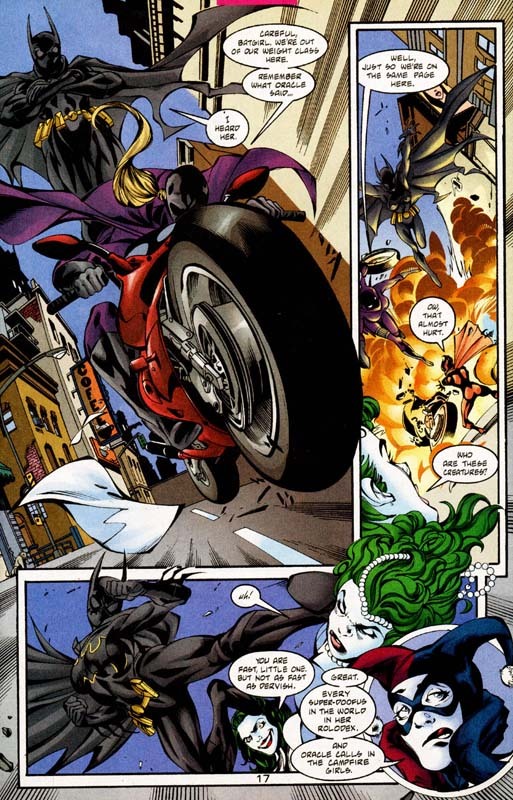 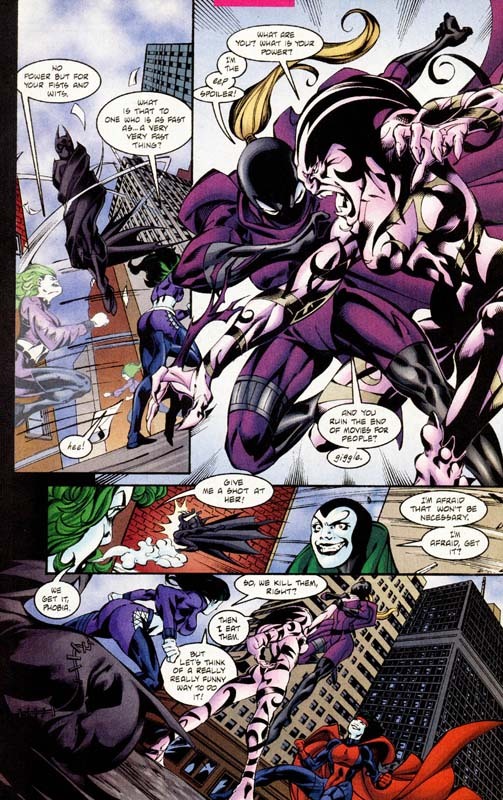 Only time someone's made that joke in comic, oddly enough.

They are all frozen in ice, but... 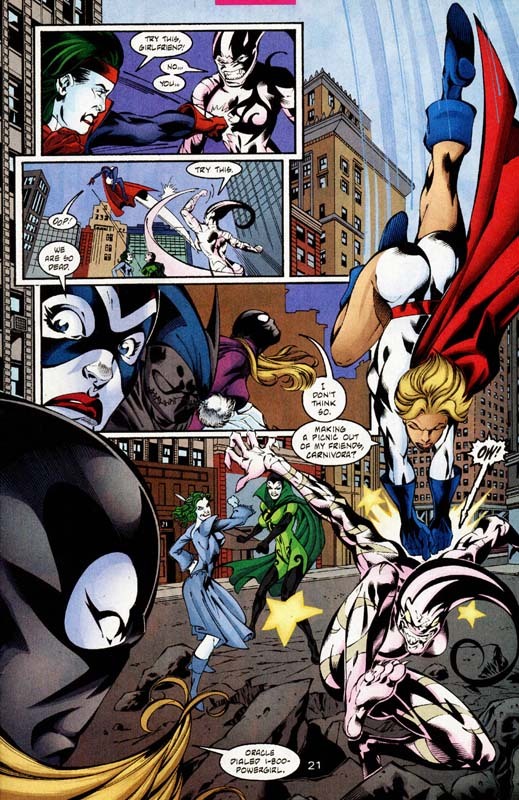 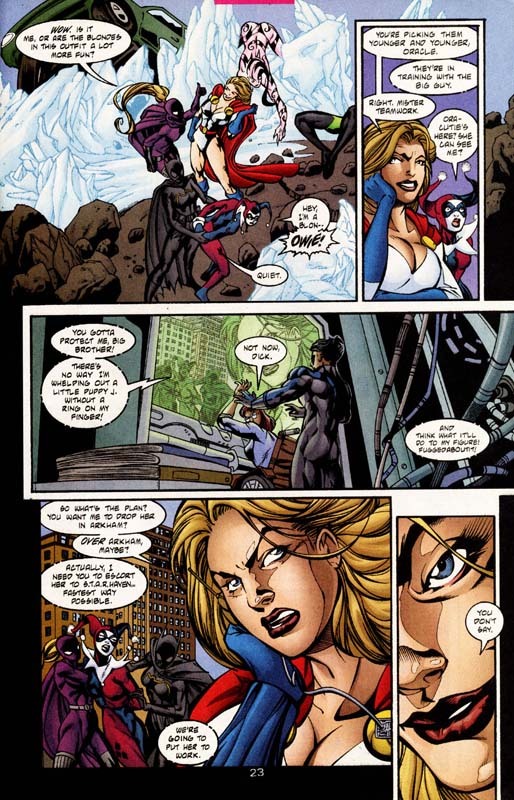 Y' know, between Steph, Dinah, Zinda and Bette, the blondes of the Bat (ish) crew DO tend to be pretty upbeat.

Batgirl #26 was a great little Steph story that really illustrated how much Steph looks up to Cass and admires her. Also, she is just plain awesome in it. Post Cass's brawl with Lady Shiva, she's laid up in bed, regaining her energy...

Anyway, one of Shiva's worshipers has taken a hostage and is calling for the one who beat Shiva... 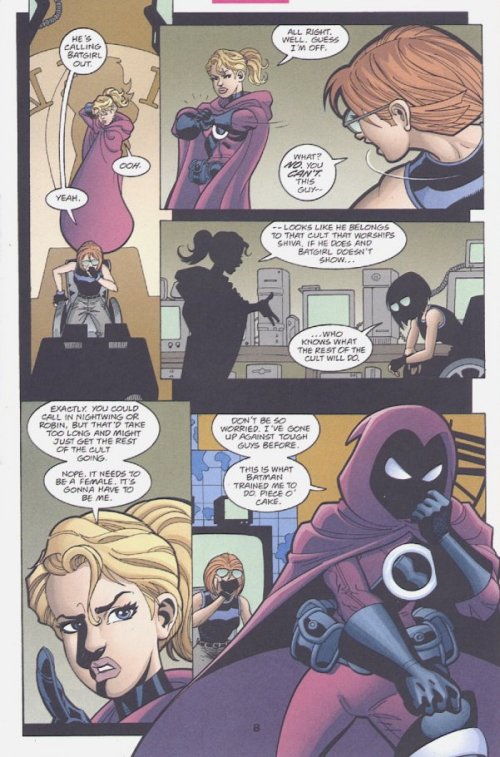 So Steph goes off the confront the worshipper. There's a really great scan of Oracle lecturing her, but, there's no room. 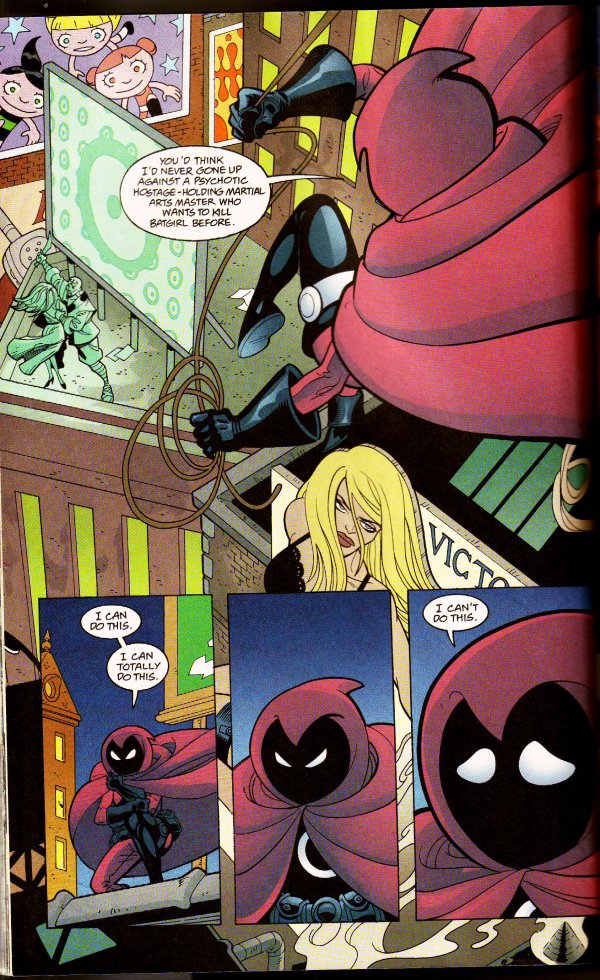 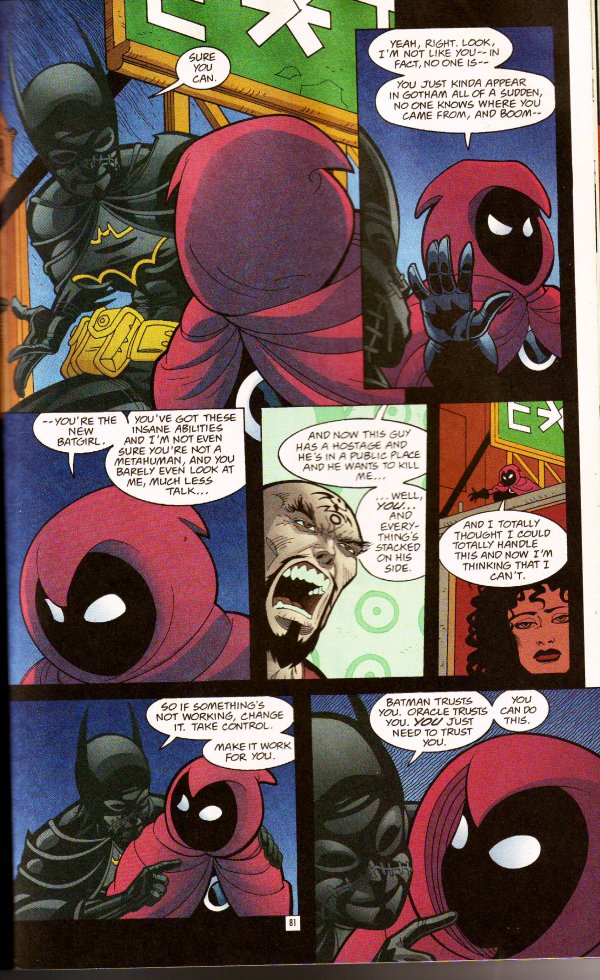 So, she goes after him and gets him away from his hostage. He mistakes her for Cass, and wants to fight her in the temple. She holds her own. But worshipper manages to land a hit on Steph during their fight, and worshipper realizes, no way is this the chick that defeated Shiva. 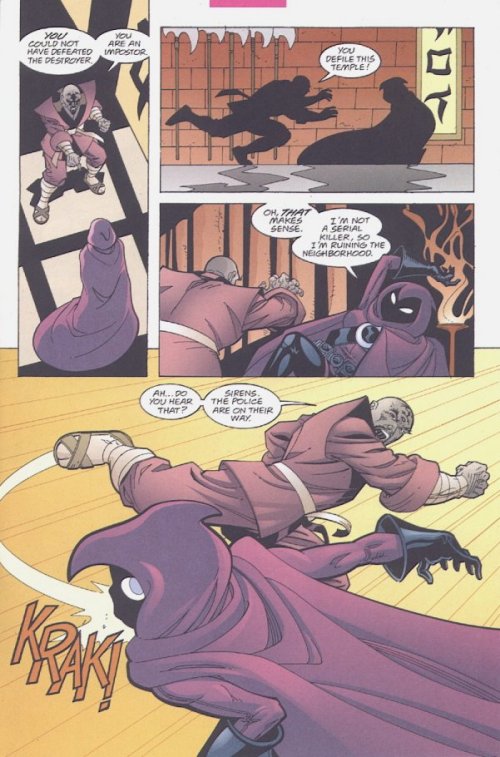 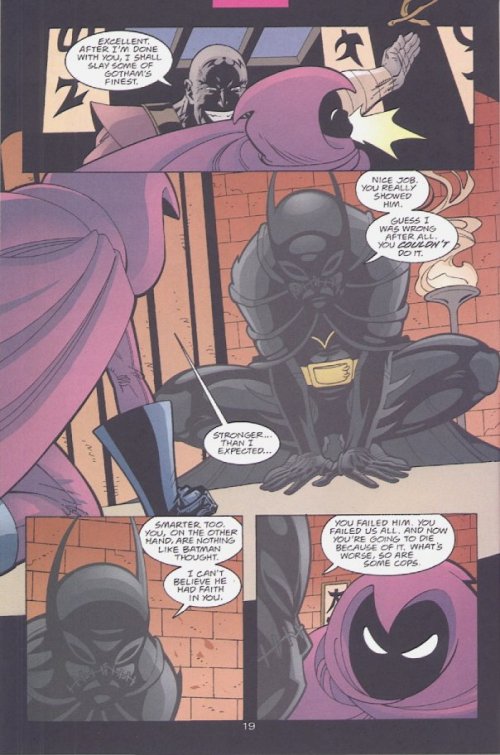 "SHUT UP!" Steph yells and she backhands ninja guy, starts running for it, Ninja guy goes after her, assuming she's trying to escape, but... 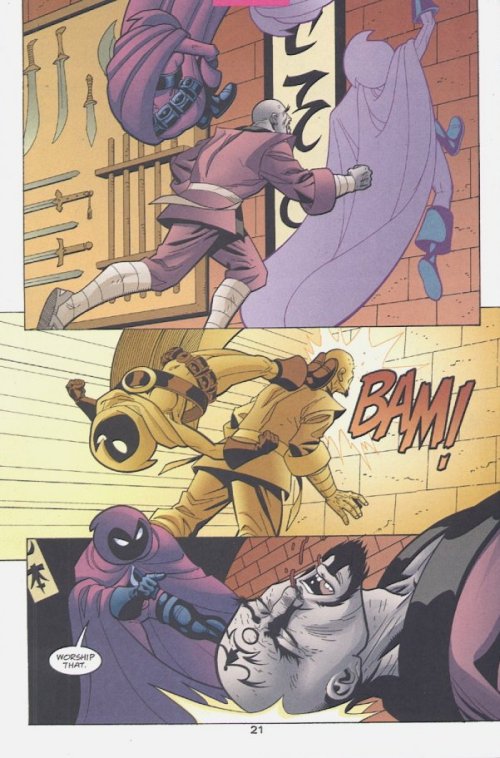 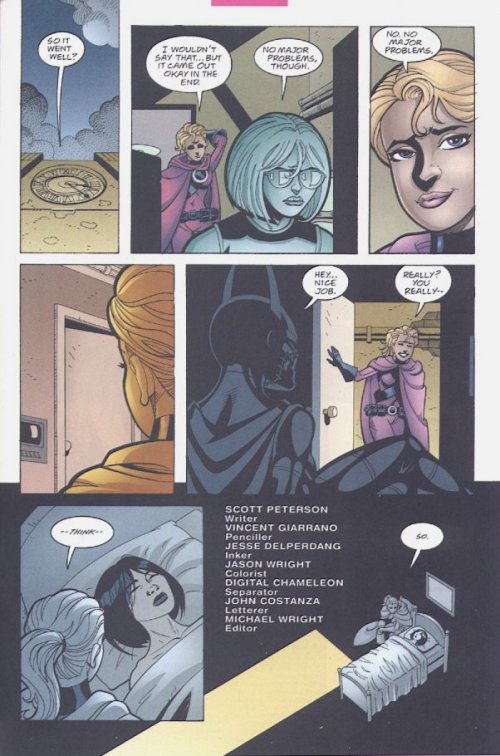 Now, onto how Cass proved (ish) Bruce was not a murderer! And Steph was invaluable to this!

Cass has taken to knocking Steph out when she figures she can't handle a fight, as illustrated here: 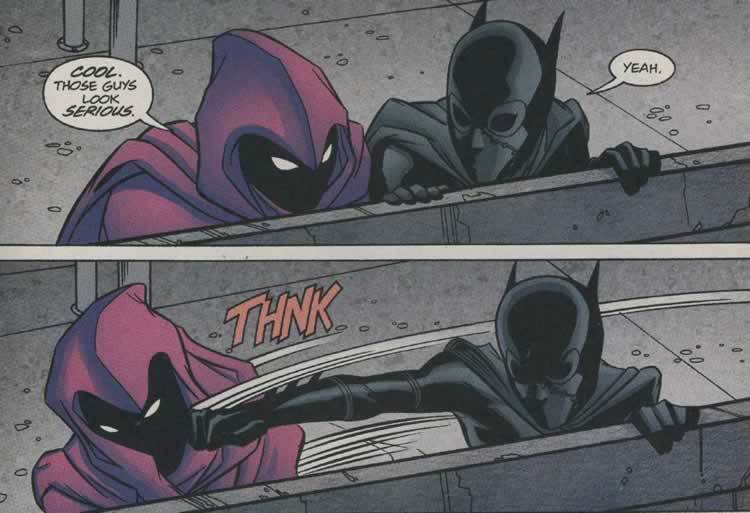 Steph's not too happy 'bout this. 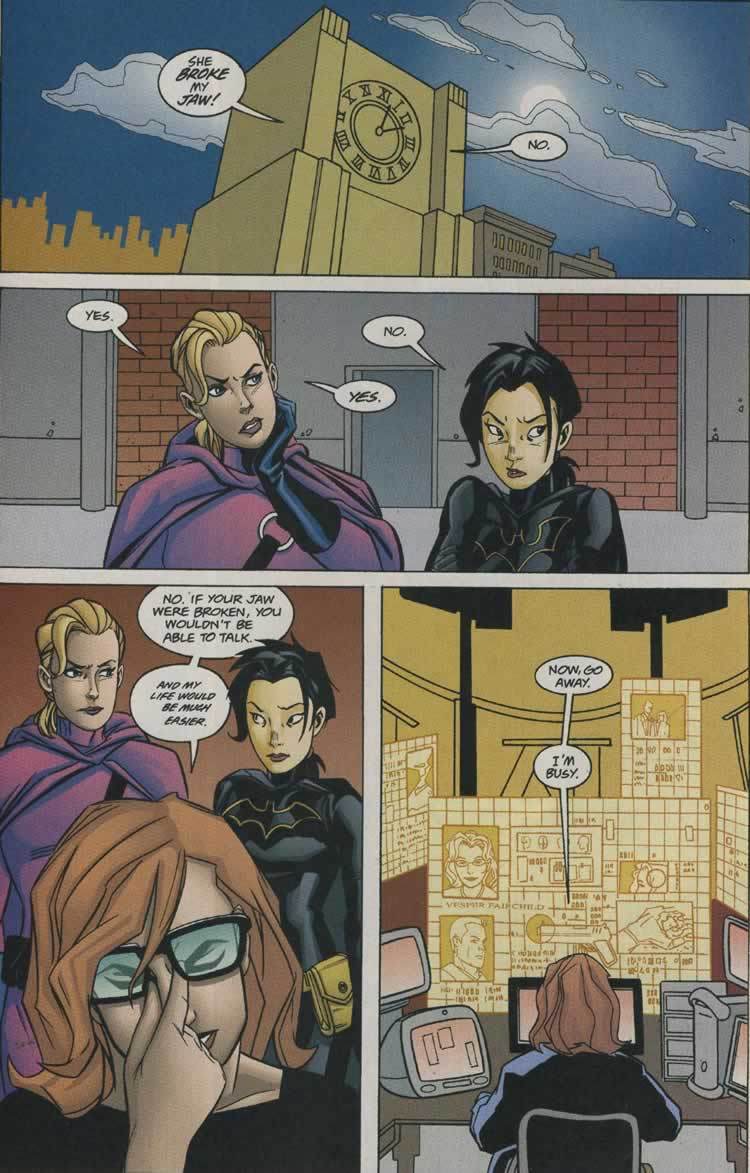 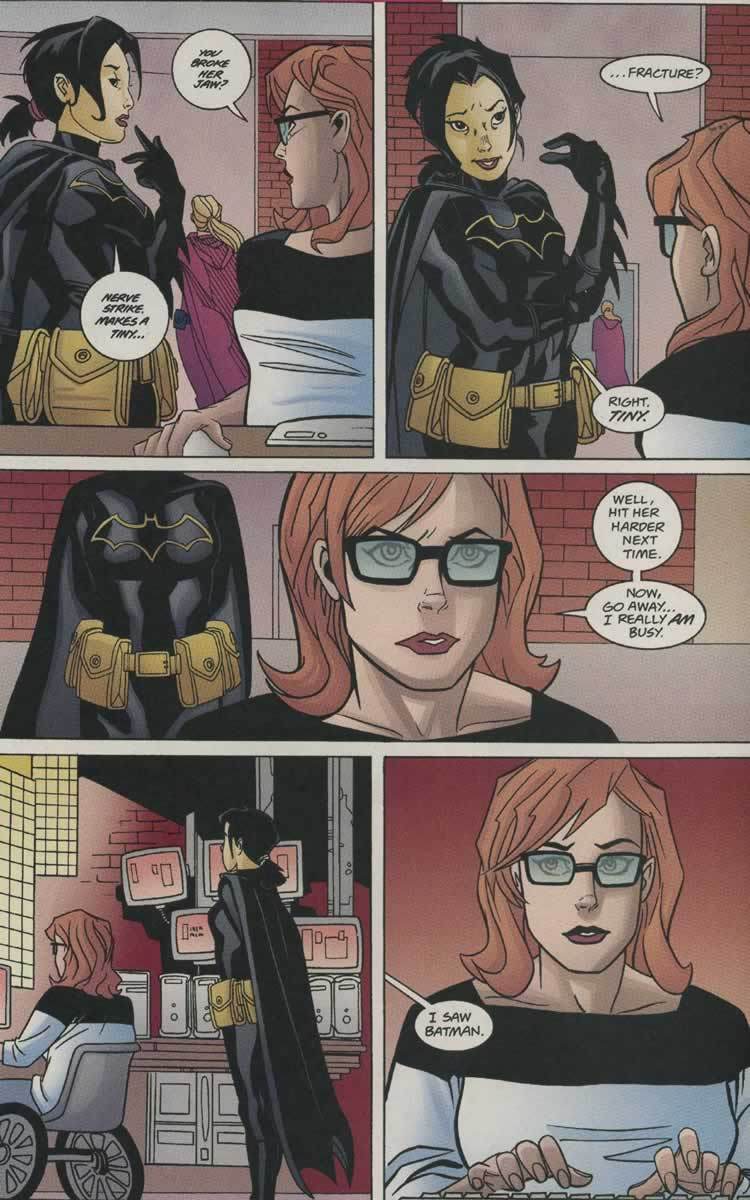 Babs is pretty stressed out with Bruce being a fugitive and all as you can see.

Cass gets Steph to take her to Vesper's grave to examine her body for clues. 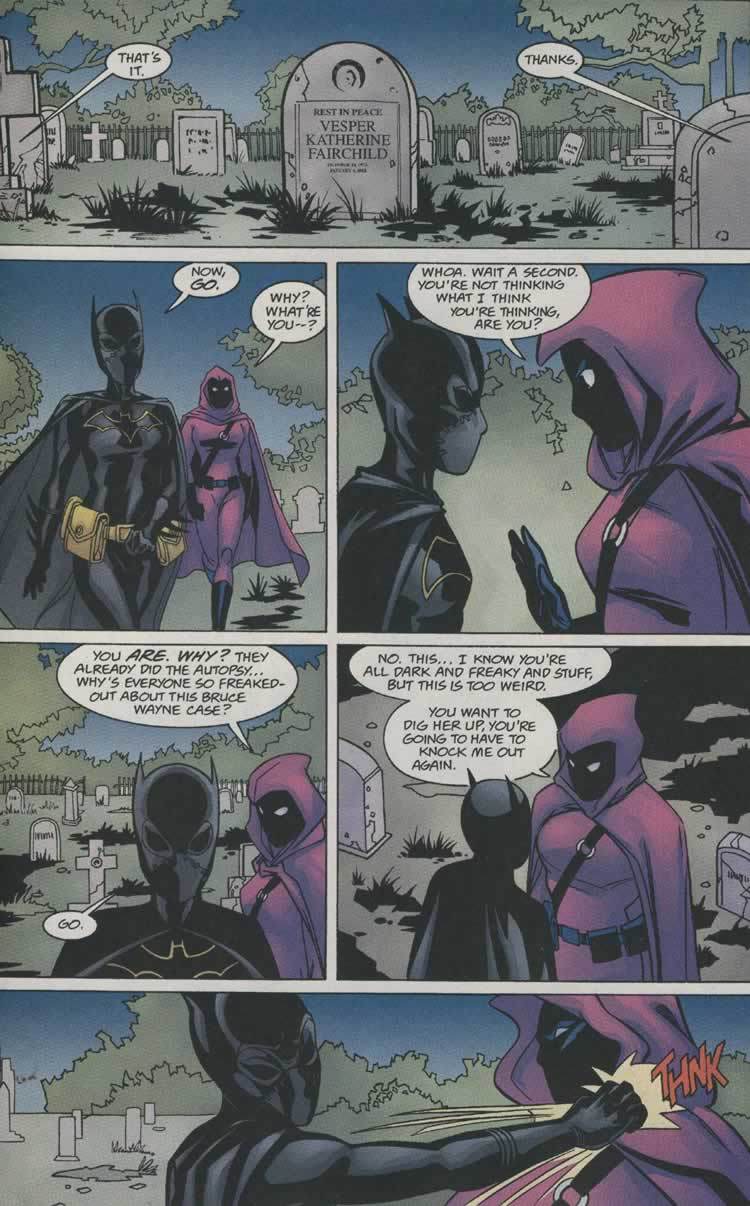 Walked right into that, Steph.

Steph wakes up, all pissed at Cass, but kind of loses her fire upon seeing Vesper's body. Cass thinks she can't tell anything, until... 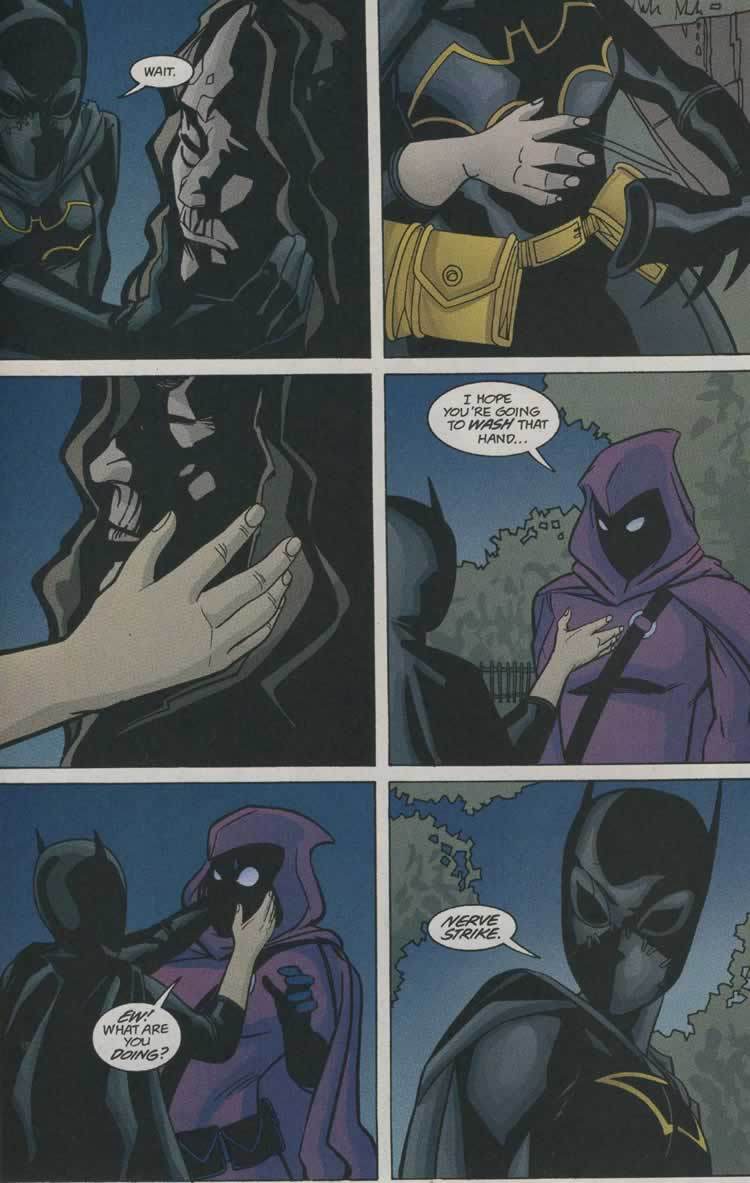 Vesper has had a nerve strike used on her, and it doesn't make sense for a super-enraged Bruce Wayne to knock his victim out so gently and precisely- or knock his victim out period, since she was concious when "Bruce" killed her. Cass reports this back to the Bat family. They are very happy.

Heh, shoulda referenced that in my "Shiva trains Steph" toon.

Sorry for the scan quality, scanner squishes up trades.

And now, when Cass trained Steph!

Well, first Steph had to ask her. 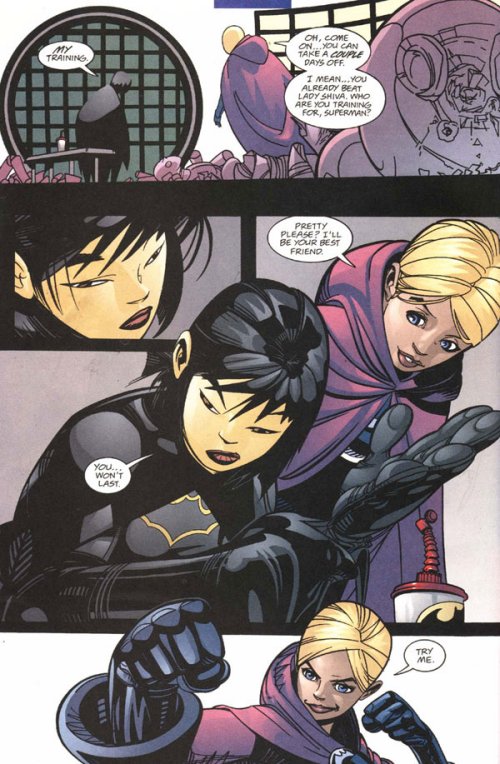 The results what you'd expect: 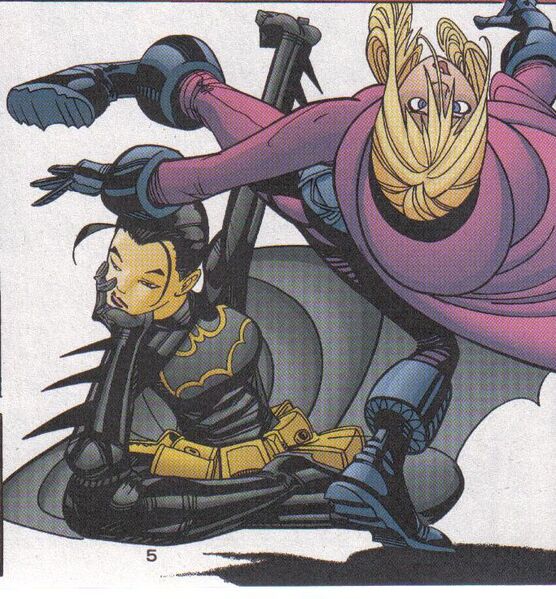 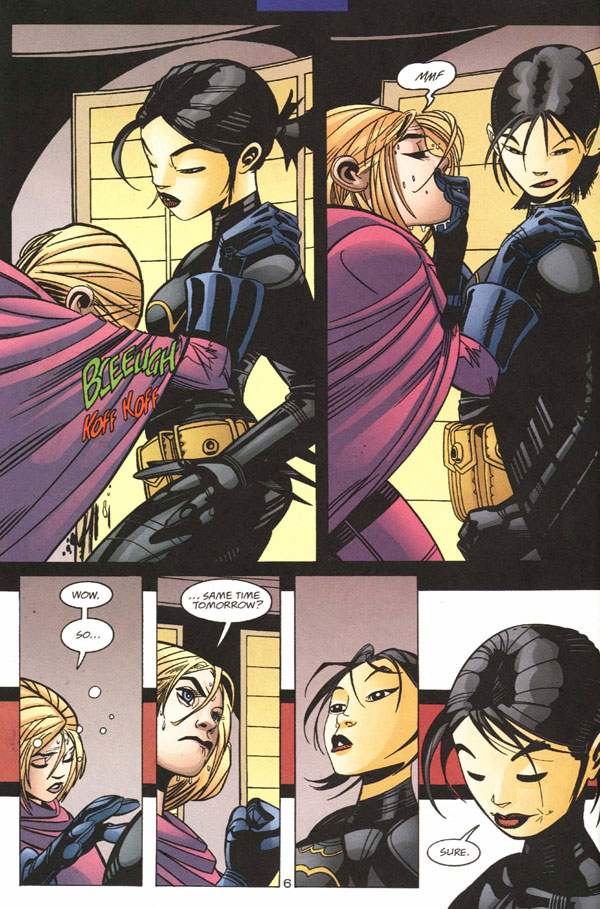 Love that scene and how it highlights Steph's kickass determination. And you can tell Cass is impressed.

So, they bond through beating on each other...well, Cass beating on Steph. But one day Steph is in a bad mood, and Cass asks why! 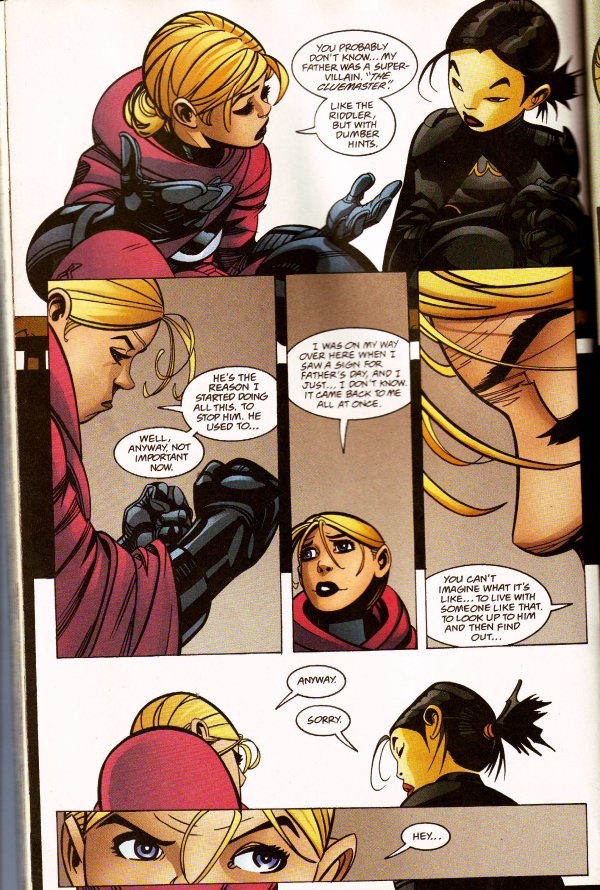 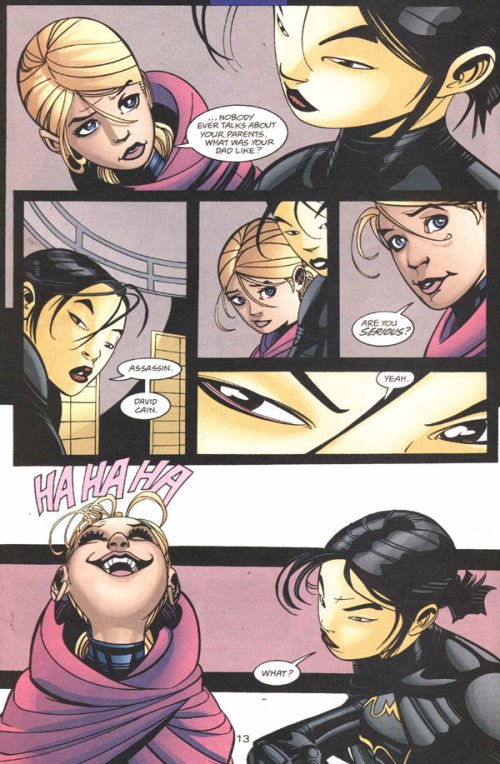 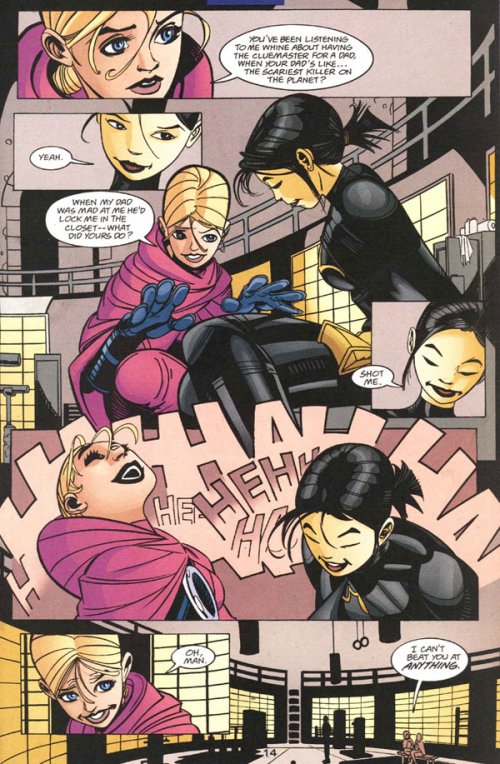 So cute. And that there's why they're friends.

But Steph has to stop the training. Why? Not exactly clear. Presumably this is when the BoP fired her. So we have Cass being a woobie. 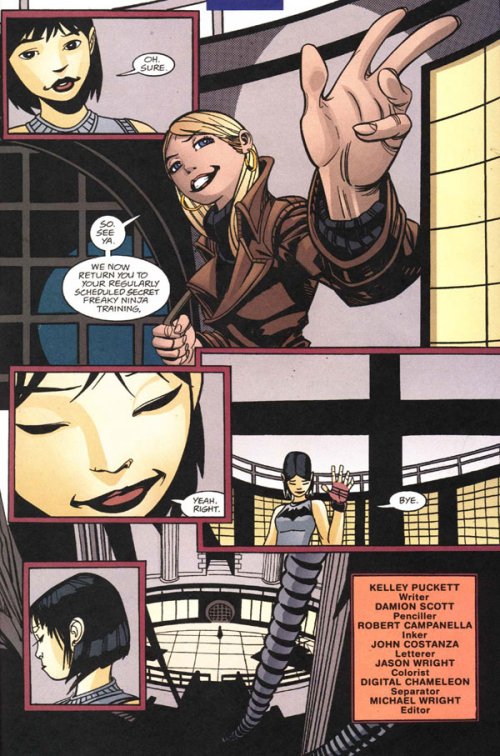 Anyway, that's Steph and Cass! I'll post their little tale in Batgirl #38 when we reach that point in continuity. Next: JON LEWIS!