Cover and Solicit to Ultimate Avengers 1

Behold, what I presume is Ultimate Red Skull! 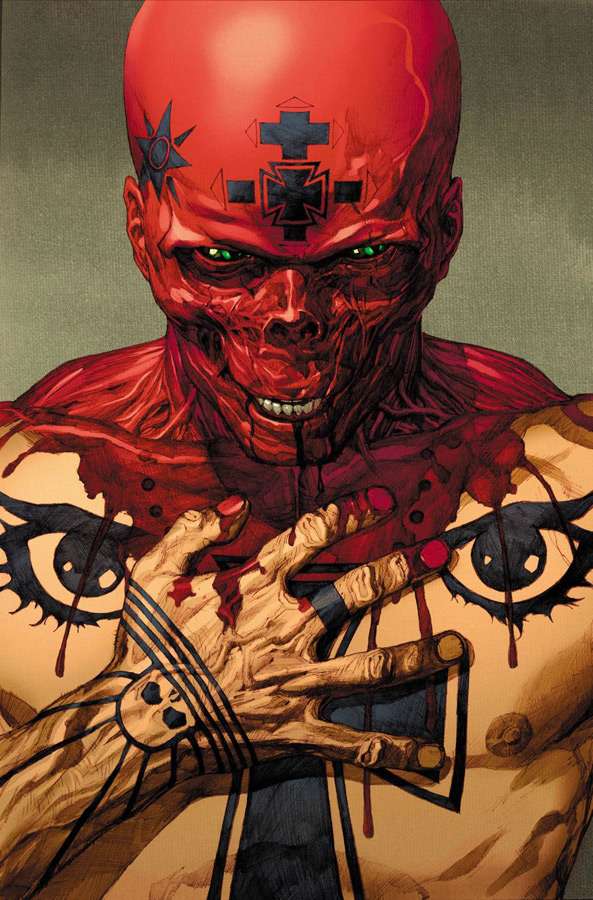 
And an opinionated rant by me,
Possibly NSFW for gore

Well Ultimatum is over at last! Hooray! But as this storyline has come to an end, it makes me wonder... is it worse than Countdown?

Hmm, well Countdown, with all its poor art, terrible writing and bad issue to issue continuity, mischaracterisation and Jimmy Olsen boning a giant anthropomorphic insect, at least had the benefits that 1. it was unintentionally hilarious a lot of the time, with at least one ridiculous thing an issue that would at least make you smirk over how dumb it was,

And 2. it was such a mess that even the event it was leading onto, Final Crisis, disowned it, so it never really had that much of an impact on other comics once it was over.

Not including all those comics it DID tie into while it was going on, or those fans of Duella Dent who objected to her being shot with a laser pistol that made regular bullet-shooting noises.

Ultimatum on the other hand...

Look to be honest, I give Jeph Loeb the benefit of the doubt a lot of the time, as I liked Long Halloween and Superman/Batman: Public Enemies. Heck, even after his horrible Ultimates storyline I was pleasantly suprised that he did a somewhat servicable annual where the various continuity errors his story had caused (when'd Black Panther switch places with Steve Rogers and why for example) were explained in a somewhat pleasing way.

BUT, for all of Countdown's faults, it never made you feel unclean just by reading it,

I mean seriously, good grief! And not only do they kill off huge amounts of (some at least likeable) characters in this mess they have them killed in the most horrible, grim fashion avaliable.

Take the death of Ultimate Dr Strange for example,
Editted Scans from the 4th Letter site, funny will disguise the pain... hopefully, 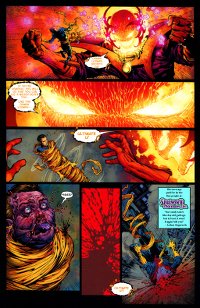 Look, I like horror films. I'm ok with gore for the most part, though I'm not really into the current turn of "tie someone up in a basement and make them saw off their foot" style of filmmaking.

Death and gore in comics I don't mind, as long as there's a point to it and if it fits with the series/universe it's based in. What goes on in Punisher Max wouldn't fit if done in a Batman comic, for example.

The violence and death in Ultimatum... I'm not sure how to articulate this properly.

Did someone like Ultimate Peter Parker steal a girl who Loeb like while he was in high school? Is he into vore? I dunno.

It just seems so... mean spirited. Wildstorm has had two reboots lately to slim down its continuity, with the Crisis-like Worldstorm and the post-apocalypticity thing they have/had going on at the moment, But as far as I could tell they didn't feel inclined to butcher all of the characters with too much backstory in order to save on recap pages.

And the worst thing is that while Countdown, as I mentioned, was mostly ignored by all the other DC comics who quietly seem to be trying to forget it existed, there are numerous storylines and series that are leading directly on FROM Ultimatum, such as the aforementioned Ultimate Avengers as well as Ultimate Armour Wars. So they can't exactly do a cliched reset button ending to bring all those people back to life again in the end.

It just irks me.

That's the main reason why Ultimatum is worse than Countdown for me: it happened, and it isn't going away.

Maybe they'll bring something good out of this dross, I don't know. But at least the future is brighter knowing there isn't really that much further down they can go from here.

Anyway, that's my opinion. What do you lot think?