All right, these two have been dancing around each other a bickering enough, time for them to get together so they can bicker even more!

Tim is having trouble with his civilian girlfriend, Ariana, and kicking criminal ass with Steph is just more fun than making excuses for Ari all the time. But Tim wants to be true to Ari so he attempts to break it off with Steph anyway. 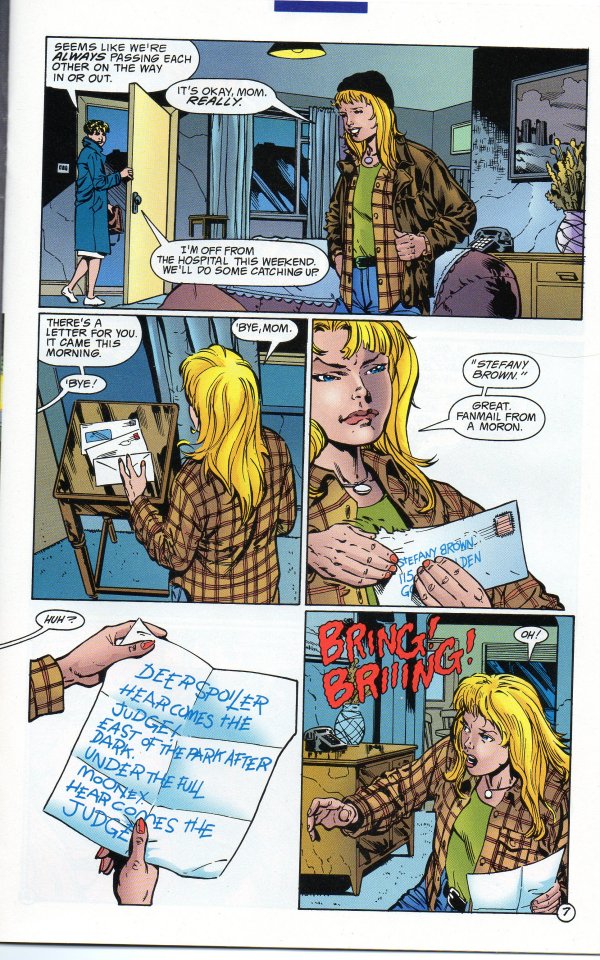 Stephanie is oddly unfazed by that note. 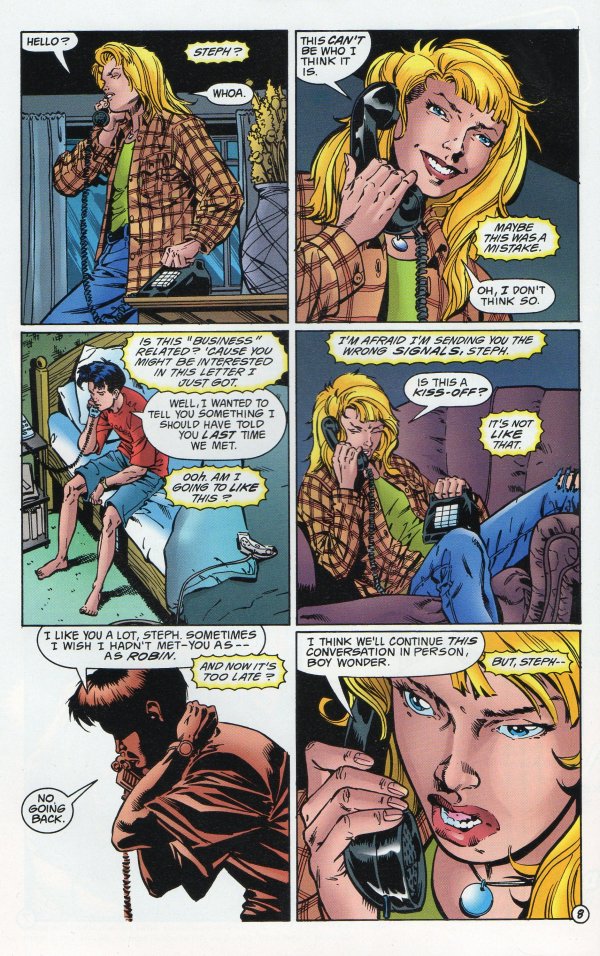 Stephanie hangs up the phone and kind of collapses into a heap of sadness....wait, one of my mood icons have it, I'm too lazy to scan it-

Tim is sad too. Steph really should have pressed it on the note. Not smart, on her part. But Tim finds out anyway, after doing some casual breaking and entering into Steph's crappy room.

Ha, Steph has a Superboy poster and Tim's jealous. What is it with blonde chicks being hot for both Kon and Tim? Steph must have been disapointed when Kon was rude to her when she was Robin, after all her lusting. Kind of ironic when you think about how Conner and Steph are together in Casstoons! Ah, Casstoons. And I like that Steph has a bulletin board of CRIME, but she keeps it out in the open, so no wonder her Mom figured out she was Spoiler!

Tim figures out where Steph could be and comes to the rescue...

Tim, you didn't overestimate anybody. You were just stupid. And so was Steph. And I love the Baffler. He's just a villian who's horribly lame and everyone knows it kind of like Dr. Light...used...to be....

But as a summary, they are kidnapped by the Baffler, the lamest villian ever.

He is so lame, in fact, when he dragged them down to a building that's going to be demolished for his standard villian deathtrap, he accidentally knocked himself out by banging his head on a pipe during his dramatic villian monologue and is stuck down here with them.

I can't make this shit up.

"Meep" indeed. I'm not sure, but I think this is the trick Steph used to escape in "War Games". She obviously learned it here, since I doubt Batman bothered to teach her anything that useful. But let's not think about War Games.

Anyway, Tim is not as hardcore as Dinah is so he kinda passes out for a while, to Steph's panic.

Tim, not taking off her gag is what got you into this mess in the FIRST place. LEARN from your mistakes.

And yes, Steph, we should always save villians. Where will you be if you don't...oh.

Tim informs her he doesn't really know as they plummet downward. I guess he doesn't pay attention when Batman explains these things. Steph is less than thrilled, but they make it.

Tim and Steph making out emits so much heat that it is like a tiny sun. Did I mention Tim is still going out with Ariana at this point? Little horndog.

I love how they punch him at the same time. Teamwork! I assume they just kind of threw him out of the grate for the police to collect and yelled "HEY! CRIMINAL HERE!" Without bothering to leave their sanctuary.

Tim, if you were really worried about people finding out who she is, you would not say her real name in front of criminals. I'm just saying.

So, Steph quits for like five seconds after this, then is all "to hell with it" and gets back in the game after the quake. She also snarks to Bats. 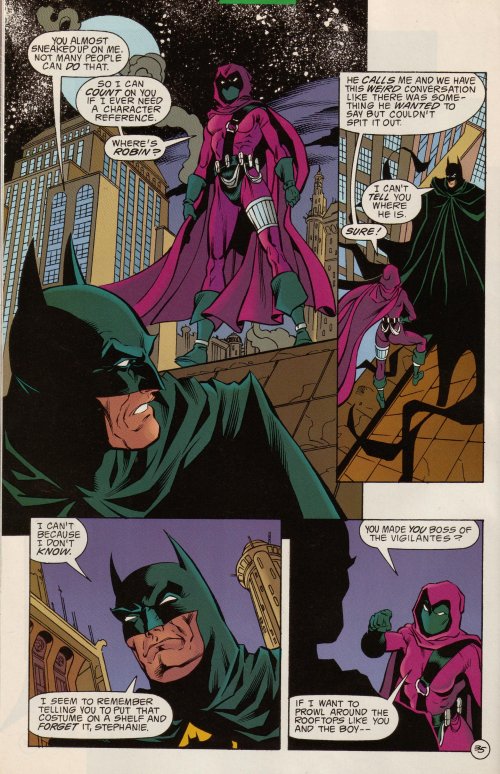 Yes, she sneaked up on Batman (she totally didn't "almost" he looked surprised in the panel before this) which not even Superman can do apparently, but somehow she is still not talented enough for the job. Epic, epic logic there. 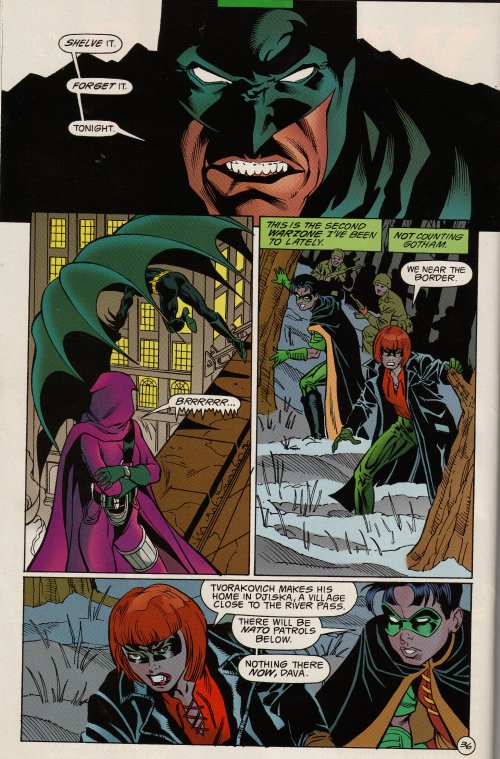 Ignore Tim, he's off fighting some war with this psycho Dava chic. The point is, Bats does not intimidate Steph and she will never give up.

Anyway, Tim and Steph keep hanging out and beating up conveience store robbers.

"It just starts with stealing a soda after saving the store...next thing you know, you're hacking up people and putting them in your freezer!" Also, Tim is rich, Steph has peeling wallpaper in her room. It's kind of easy for him to lecture on how we should aways pay for things. He should offer to pay for the soda. But I suppose teaching Steph the value of...values is more important.

In a letter column, someone said Steph was foolish to take off her mask in a store when a security camera could see her. The editor replied there were no security cameras and Steph knew that. No wonder the store got robbed!

Anyway Steph is all "I wish I could say I was joking back there, I do not want to turn into a psycho, as you say stealing soda leads to." Tim is all "It is okay." And Steph is all "I met Huntress. She was scary." And Tim is all "Yes, she is my friend, but she is completely terrifying. She probably stole sodas too." And then Steph is all... 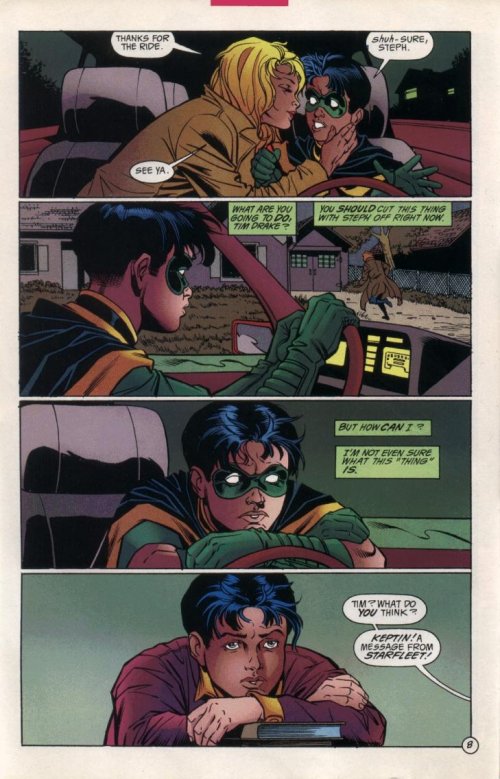 Tim continues to be torn between Steph and Ari. But he makes a decision. 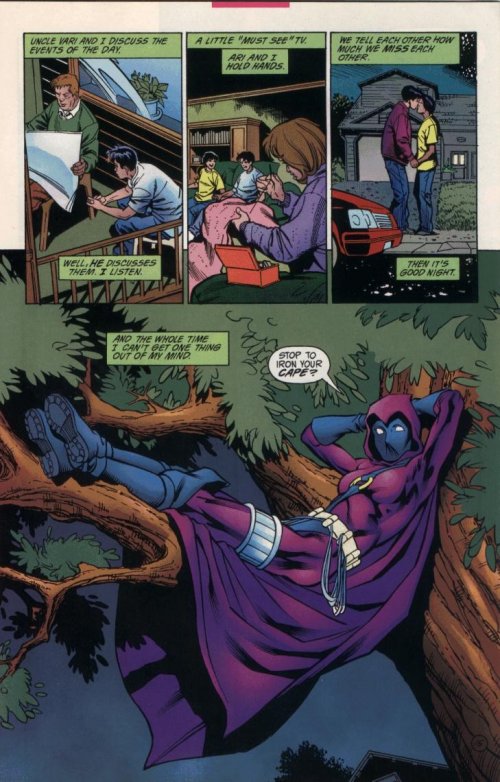 Steph is so awesome on the tree like that. I don't know how you can look at that panel and not love her (though it is clearly possible) 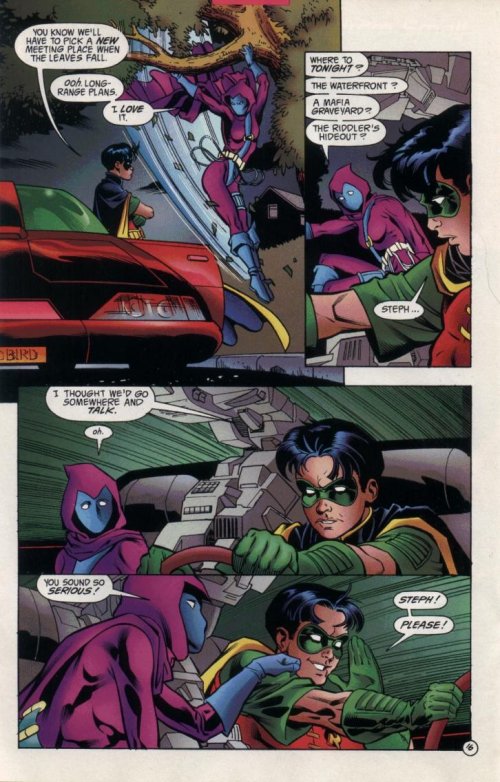 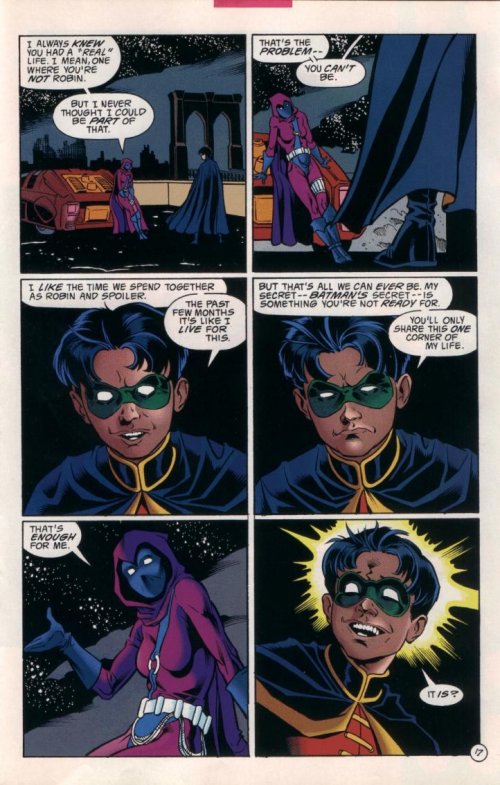 Yeah, this won't be a trainwreck. 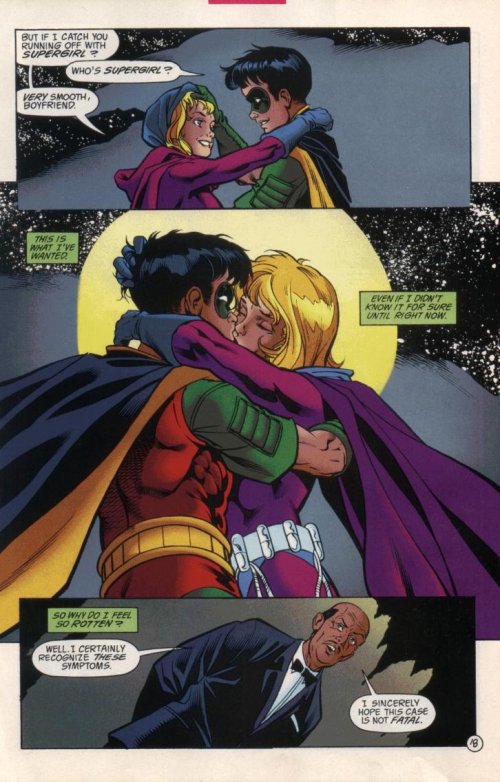 As the poster who origionally posted these scans said- It's really SuperBOY you have to worry about Steph.

Anyway, Tim is going to break up with Ari so he won't be CHEATING on her anymore, but she dumps him first and runs off to be a lesbian to hang out at her All Girl's school. Tim is sad, but he bought it on himself, so he gets over it and goes on his first date with Steph.

First, Tim scares Steph half to death by making her close her eyes, and follow him somewhere, and then suddenly uncover her eyes to reveal they are nearly falling off a huge tower. He apparently thinks this is romantic. Oh, Tim, you silly. 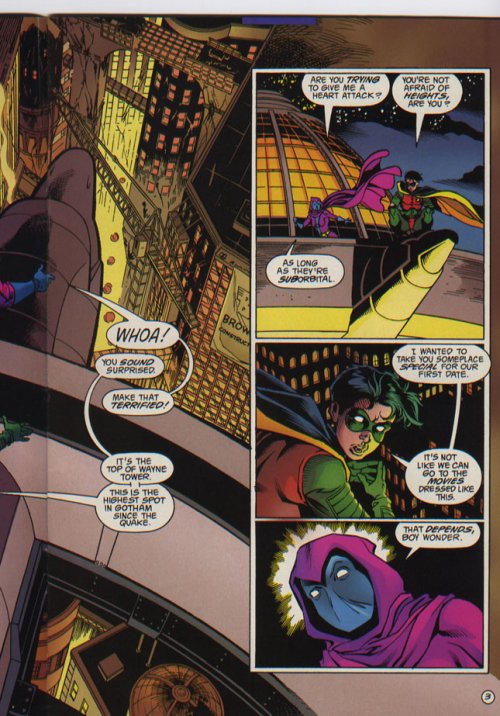 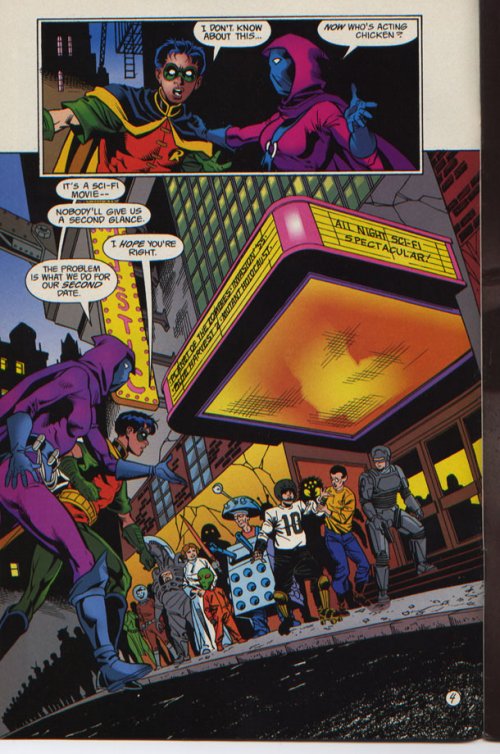 (Apparently the answer is: "Lamaze classes".) 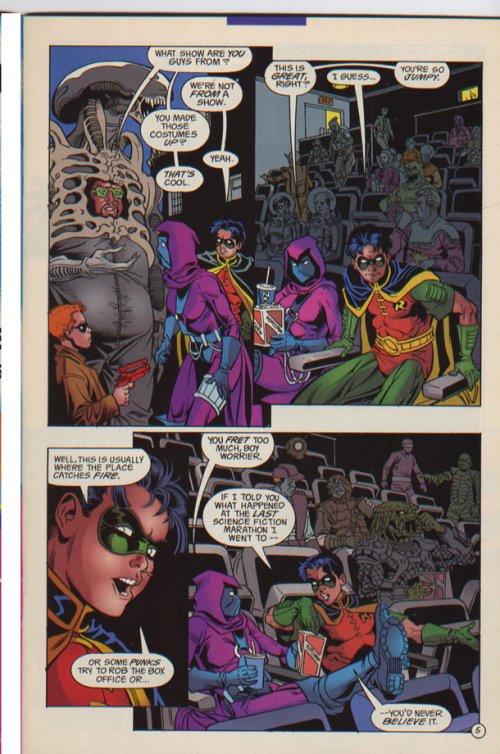 Dear God, Tim would be a drag to date. Imagine taking him out to eat.

Date: Oh, Tim, this is wonderful! I'm having such a good time.

Tim: "Yeah. I bet we catch on fire or aliens invade and we all die in rain of blood. Last time I went to a restaraunt, a giant Man-Bat attacked it and ate two people. I watched them being devoured slowly. That will probably happen here. And I bet-"

Anyway, Steph makes out with Tim a little and they go out to eat... 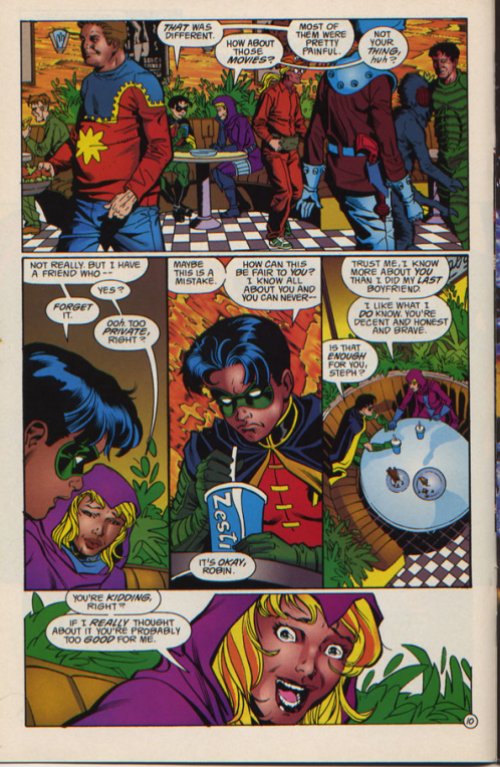 Crazed look aside, I find that last panel really sad, because it shows how low Steph's self esteem is. She's been treated like such crap, she'll gladly accept not knowing Tim's name, and even decide that since he's a nice guy and saves lives (just like she does) he's clearly far too good for her. 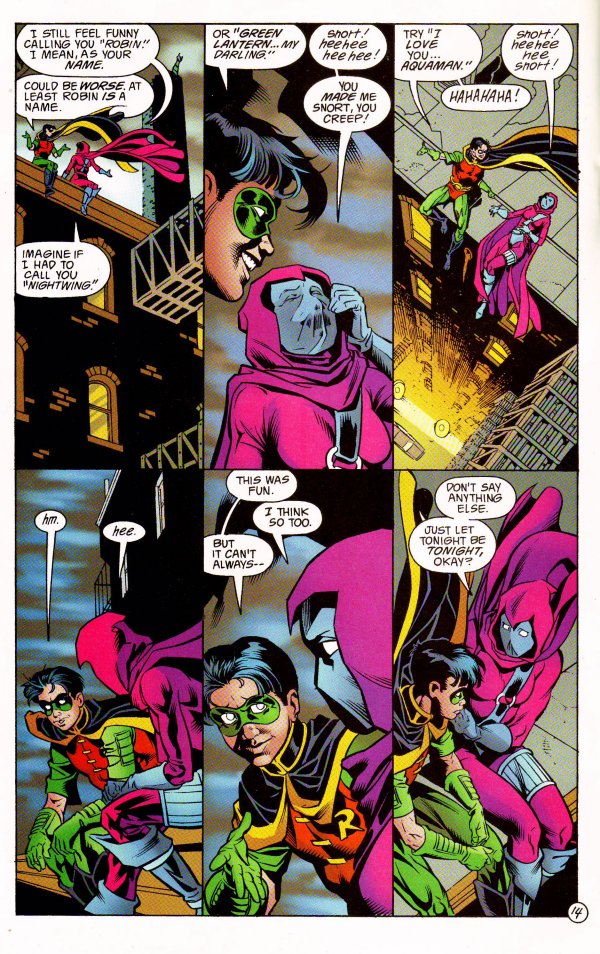 So cute. Though seriously, Tim must be the most DOWNER date ever. He interrupts their perfectly happy conversations with "Yes, but our lives will be a string of bullets and horror again shortly" a totally of three times this issue. I imagine Steph speaking that last line in hushed tones, trying to keep him for spinning off into a paranoid frenzy, sure any second something horrible will happen to them.

Instead, they make out some more and go to the playground. 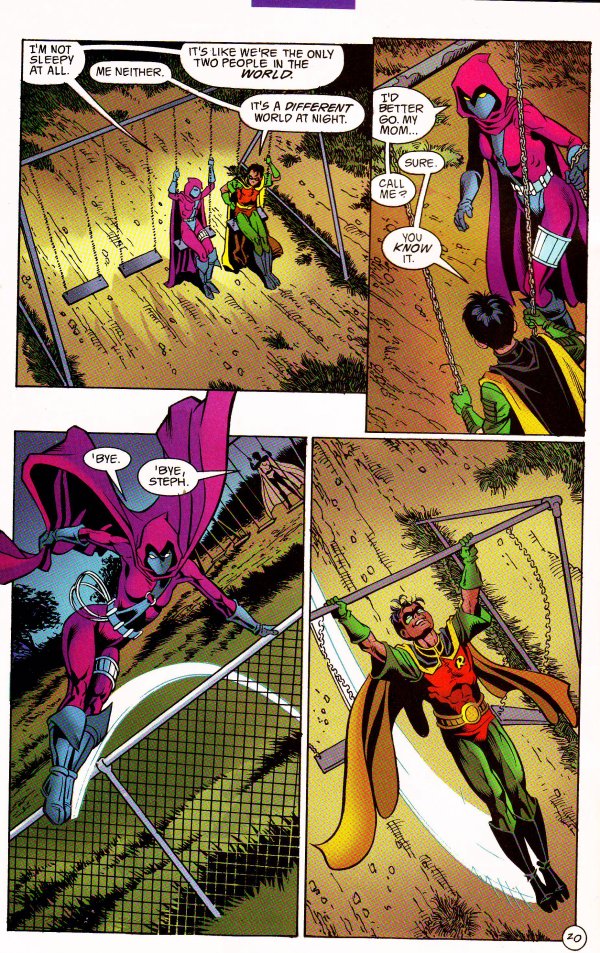 Happiness! And it is automatically ruined two pages later, when Steph reveals she is preggers by Dean the Scuzzball. But Tim sticks with her, nice guy that he is, and they put the baby up for adoption.

So next, we have Steph punching Tim's Stepmom in the face, and after that, Steph finds out Tim's Sekrit! Same Steph time, same Steph channel!