Mack the Ripper, or Lulu Never Gets A Break
A bit that stuck out from the immensely enjoyable new League of Extraordinary Gentlemen.

At the moment, I happen to be working on a comics adaptation of Frank Wedekind's "Lulu," and poring over every version of it I can find. I even found a French TV version that had Udo Kier in it, as he always seems to be in everything.
As Alan Moore has over the years instilled in me a serious awareness of weird coincidences, I was pleasantly surprised and a little weirded out to see that, in the midst of his restaging of The Threepenny Opera(which he and O'Neill do as though born to it, but Moore has always had a serious Weill influence), he brought in--nearly precisely--the ending of the play "Pandora's Box," and made what is in the play, literally, Jack the Ripper, Macheath in the midst of Moore's new version of that song we all know well. And this Lulu is of course based on Louise Brooks, well-known to many here as the face of one of our posters. Anyway, I liked the sequence so here it is(though the new twist to "Pirate Jenny" is pretty awesome, but that would be too many pages):
Basic setup: It's London, and Macheath has returned, and Lulu is walking the streets, having gone through(fatally) a number of husbands, and ended up from wealth and status to this. (Not really through any fault of her own exactly. Men just destroy themselves around her) 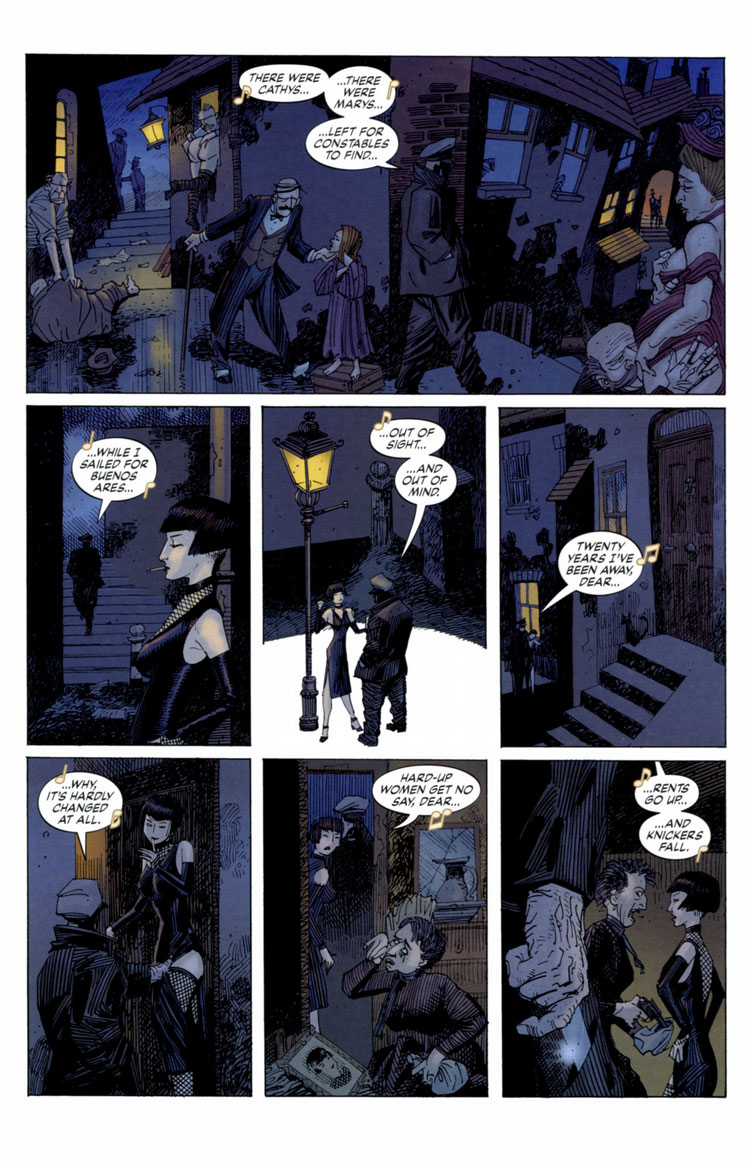 And here we have an altercation with the first lesbian in Western fiction, Countess Geschwitz, obsessed with Lulu and rejected by her, and getting a bit tired with only having an old painting of her to cuddle. But Mackie's not having that. 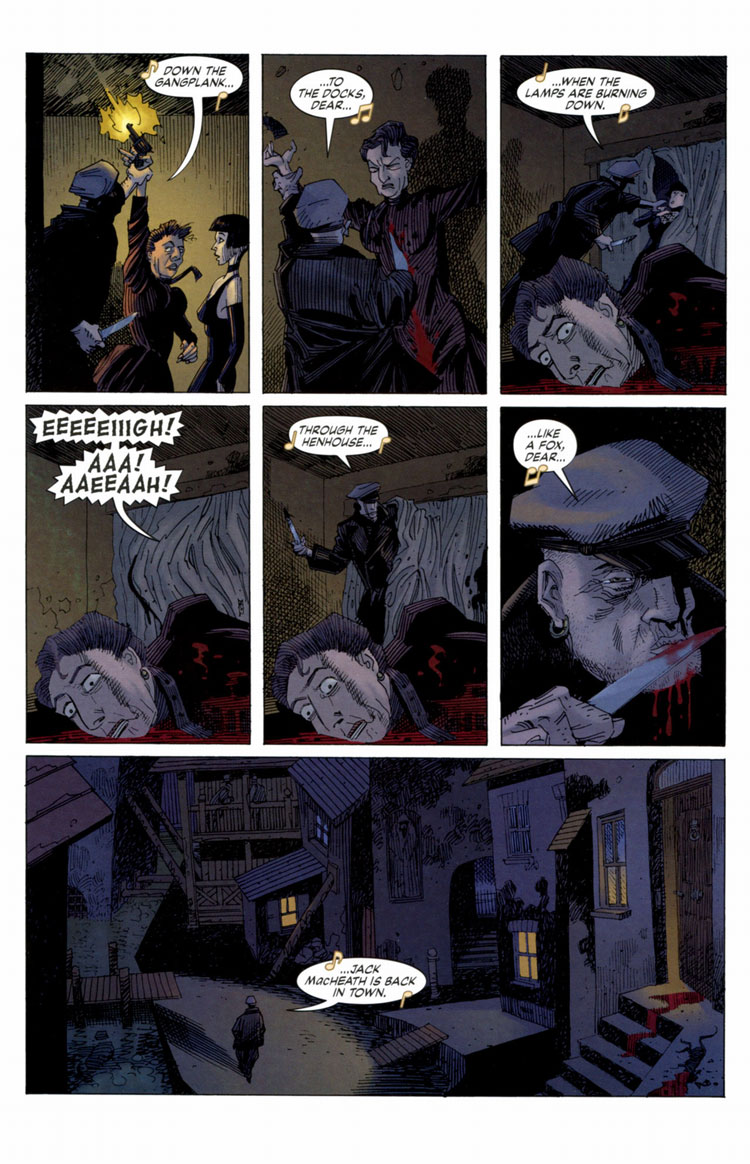 And we say farewell to Lulu. Though there is this back cover, and there are any number of paintings just like this from the turn of the century. Depictions like this of women were very popular with middle-class salongoers. 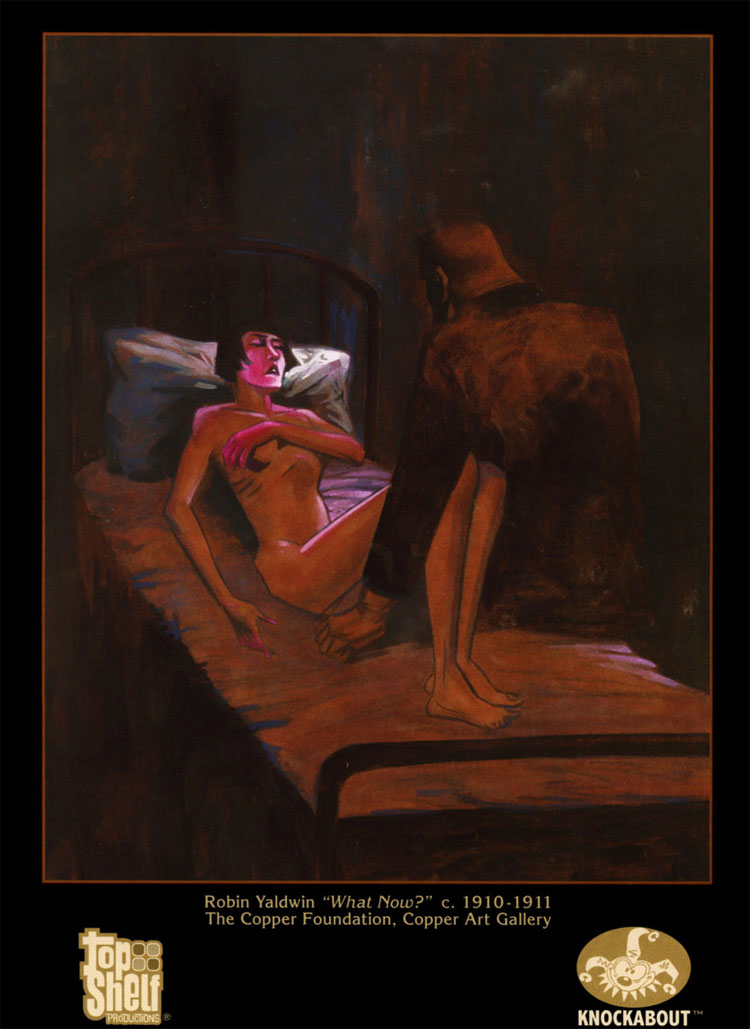 I would add that an even stranger additional coincidence was the recent release of the "Tales of the Black Freighter"(which I liked) which has the "Pirate Jenny" song, quite central to LOEG, playing over the credits. But the imagery in that song is something that goes deep in Moore.
By the way, for fans of "the Ruling Class"--the 14th Earl of Gurney also plays a central part in this. Also Iain Sinclair's Billy Pilgrimish Norton from "Slow Chocolate Autopsy," who can travel in time but not in space and is trapped in London, flashing between eras, and Moore does a great pastiche of Sinclair. It also has Crowley, sort of, as usual with Moore these days. And Orlando turns out to be a real douchebag. I suggest getting it. For those who didn't like THE BLACK DOSSIER, here's your action. But now you'll also see the use of the info in it.