All Snape, All the Time 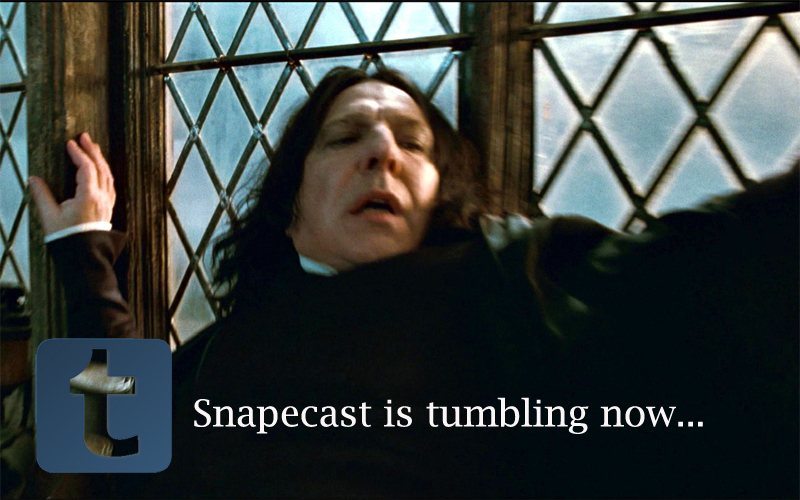 Need your Snape fix this summer? If plan to attend Ascendio, the Snapecasters will be hosting one of our famous Snape meetups during the con. For more information, check out the Livejournal community.

And if you have not registered for Ascendio yet, be sure to do do before May 1 when the registration price increases. And don't forget to mention you were referred by Snapecast.

It's that time of year again. Snapecast has an owl on the way to wish everyone's favorite snarky professor a happy 52nd birthday...

How will you be celebrating?

Due to a problem with blibbering-humdingers in the server (that may or may not have had anything to do with one snarky professor), snapecast.com was down for a while. We've called in an expert to take care of the infestation and are back. Stay tuned for further Snape-ing!

For those who did not have a chance to download our first video episode, our Snapey shenanigans can now been streamed. The episode is available via YouTube in two parts...

Entering the Park - (0:27)
Wandering Fen: Rachael and Meagan
- Rachael and Meagan explain how to get to the Harry Potter portion of the park (and wear matching t-shirts)
- Snapecast staff takes the Jurassic Park route instead of the Doctor Seuss route to get to Hogsmeade

The Mission - (9:13)
Wandering Fen: Rachael and Meagan
- Rachael and Meagan enter the Forbidden Journey ride and complete the mission
- Through the magic of our sophisticated video equipment (pocket video camera and flashlight)see Snape's door

Frivolity and Butterbrew - (13:05)
Wandering Fen: Rachael and Meagan
- After finishing the ride, Rachael and Meagan engage in some frivolity
- Update on the status of the letters
- Our weary heroes have a butterbrew at the Hog's Head

Contact
Magical and Muggle listeners are encouraged to leave comments in our blogs, post to our discussion boards, send us e-mails, or leave us a voicemail. Here's where you can reach us:
Website/Blog: http://snapecast.com
LJ: http://community.livejournal.com/snapecast/
IL: http://asylums.insanejournal.com/snapecast/
Dreamwidth: http://snapecast.dreamwidth.org/
Twitter: http://twitter.com/snapecast
MySpace: snapecast
Discussion Boards: Snapecast on Why Snape?
E-mail: severus@snapecast.com
Skype Username: Snapecast

Please visit www.magnatune.com to listen to and purchase many of the fabulous pieces of music you hear on Snapecast. Snape may be evil, but they are not.

Although many Snape fen are currently enjoying themselvess at Aeternitas, Becca and Rachael recently spotted some Snape at a non-HP convention, Sakura Con. There was not much, but we did see...

A Snapey keychain from Gum Gum... 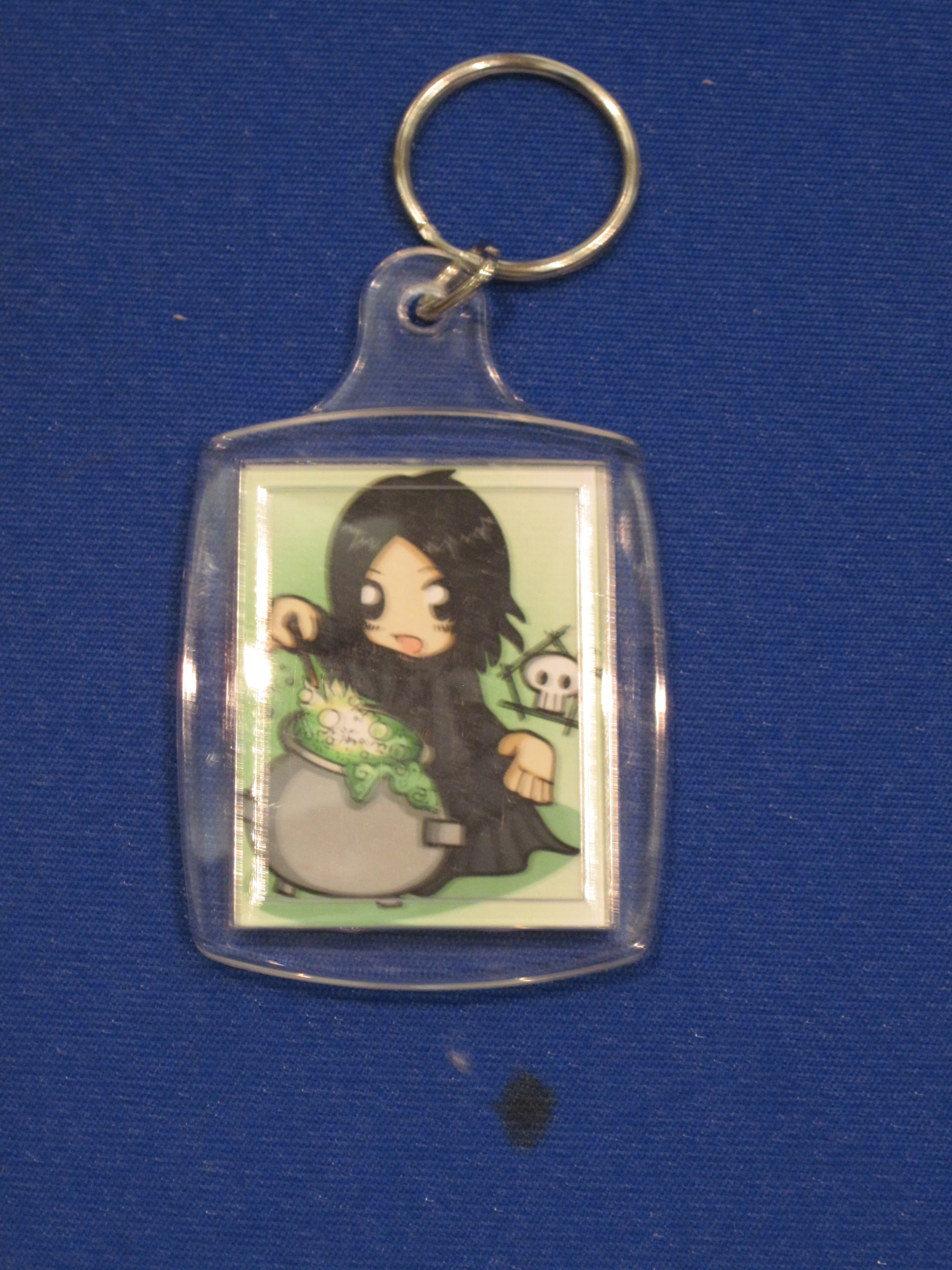 Some Snily fanart from Nuriko Kun... 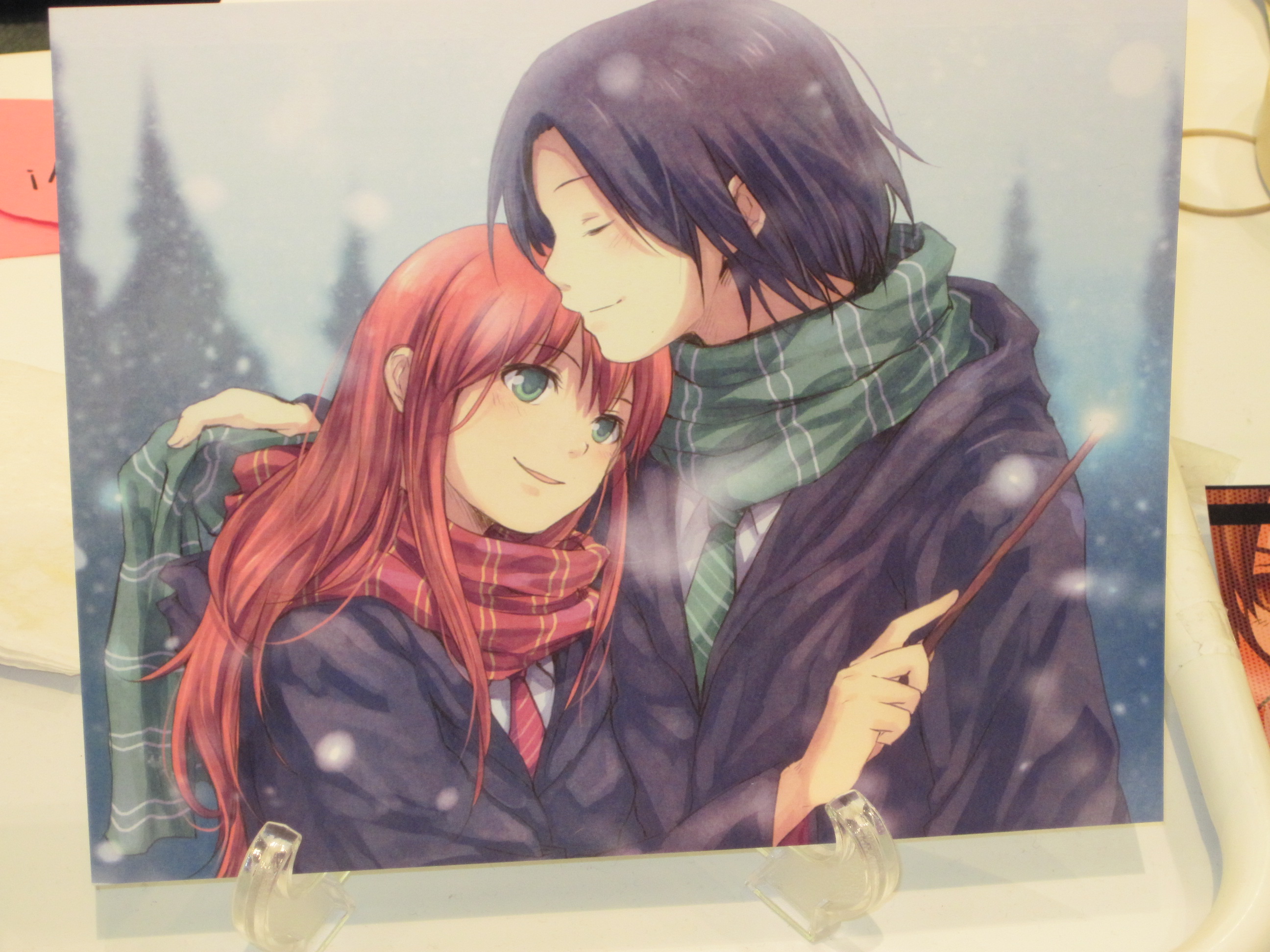 And we think this might be a silver doe/stag thing... 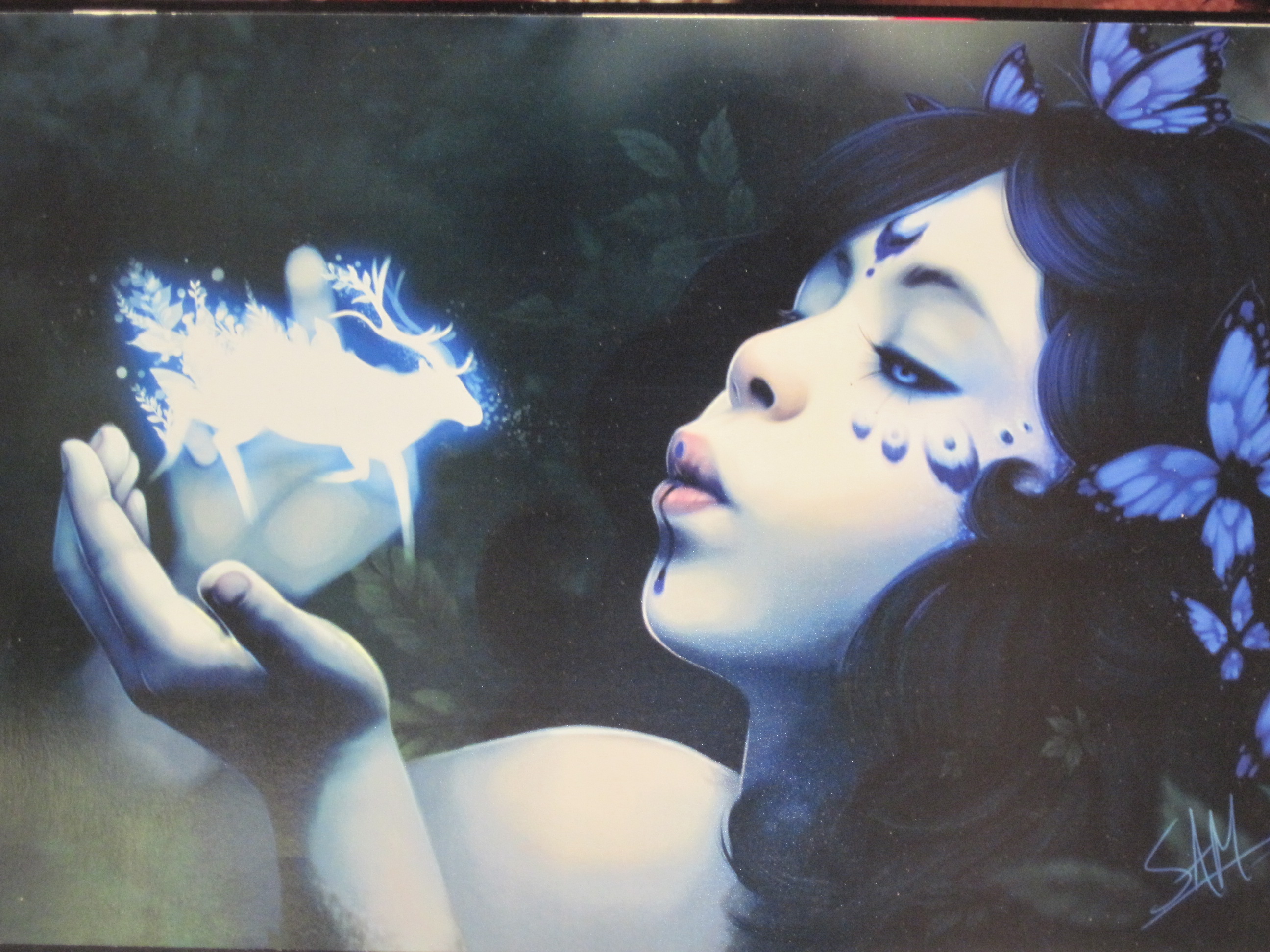 Hey, we see a bit of Snape in everything. ;)

A recent video from ABC Family featured previews of Deathly Hallows Part 2, which included some haunting pictures of Snape. We took some screencaps. Be sure to click on the images for the larger size and Snape in all his glory. 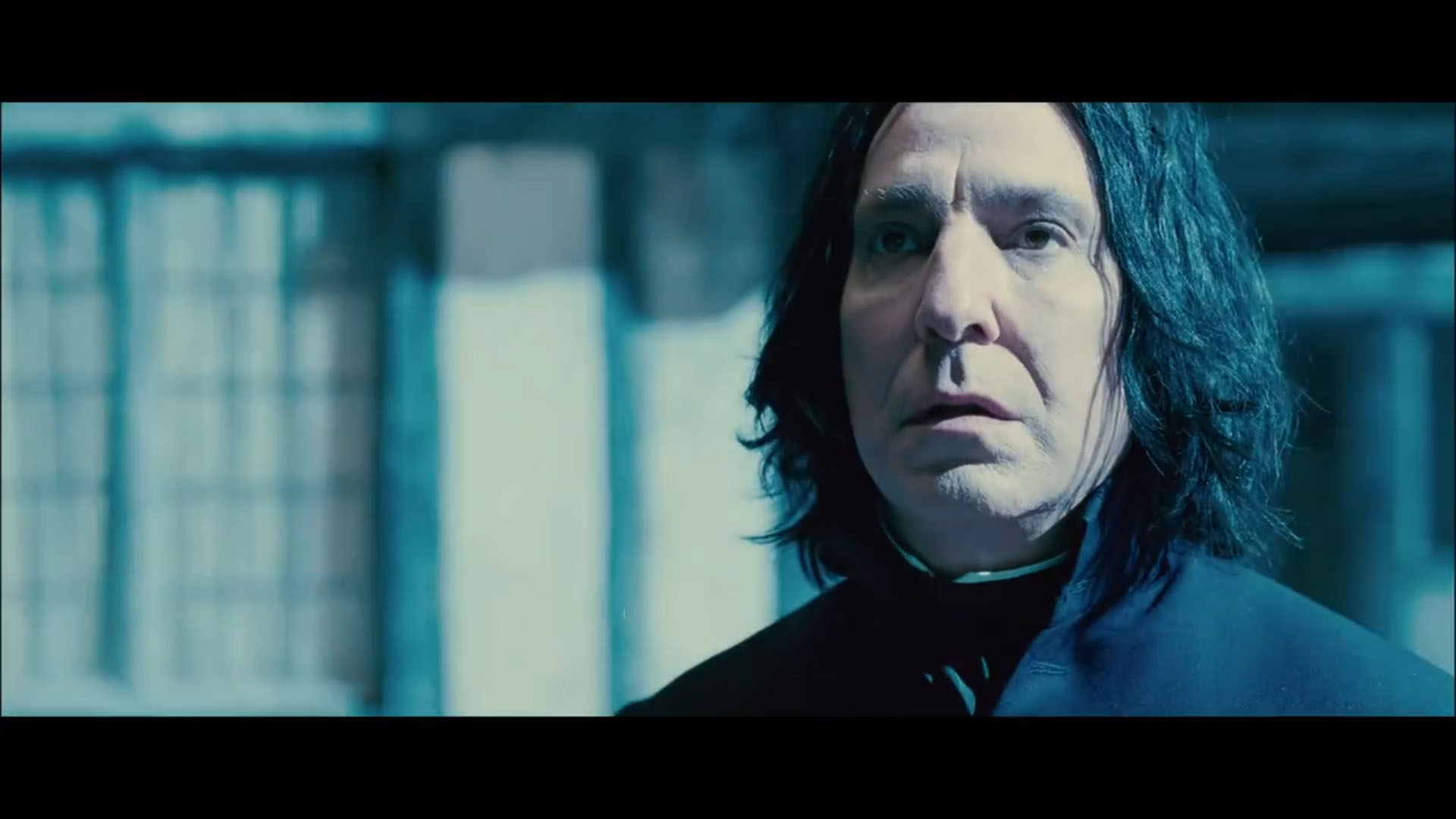 So what does everyone think? Is this Snape outside the Potter's house? Are we going to get flashbacks?

You didn't think we would forget the Professor's birthday did you?

The Snapeologists at Snapecast know we have been dreadfully slow about an episode in reaction to Deathly Hallows Part I, but don't lose hope yet. All good Snape fans know what special day tomorrow is and we promise we won't let you down. Be on the lookout for something epic and record breaking.

While you are waiting for the Snapecasters to get their act together and put out an episode about Deathly Hallows, you can squee with other Snape fen in the Deathly Hallows Snape chat room.

The Professor looks a bit sad as the featured May model for a recent Harry Potter calendar... 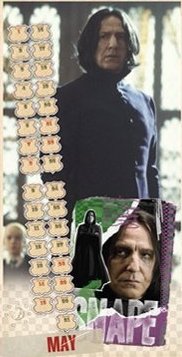 Three questions for everyone...

1. Why isn't he Mr. January?
2. Am I the only one who thought the picture in the corner looked like a Barbie doll box?
3. Why isn't there an entire Snape calendar?

A number of Snape fen have asked us about posting content for the Theory of Dimishing Snape talk we gave at Infinitus last month. If you are interested in having a look at our highly detailed (and somewhat scientific) analysis, we have a link to the presentation materials here. Please let us know what you think!

The Muggles who run this podcast are still recovering from their incessant Snape-ing at Infinitus this weekend, but I thought it would be prudent to post about their adventures. I came along to the convention because Rachael told me "it was part of my contract." I was able to hoodwink the Muggles into giving me money and I procured reservations for my own hospitality parlor and king suite. 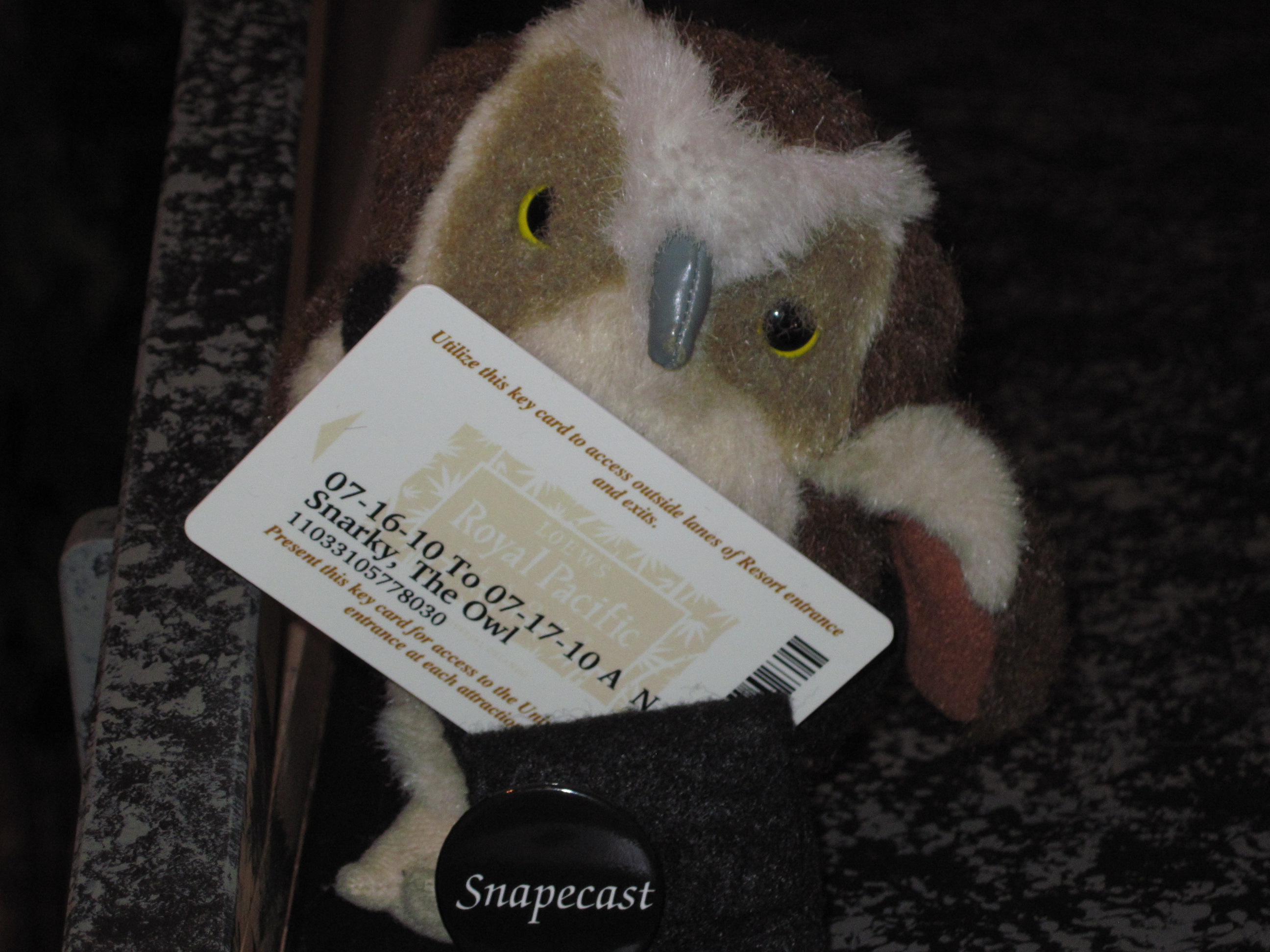 ( Then the Muggles ruined my vacation with their absurd party )

I plan to bring a lawsuit for intentional infliction of emotional distress to an owl and am gathering evidence via this Flickr group. Please submit your photos there.

WB has Property of HBP Shirts

Someone is starting to realize that there can never be enough Snape merchandise. WB is selling Property of HBP t-shirts.

You are cordially invited to the Sitting Room at Spinner's End to pass the time sneering, Snape-ing, and hexing Gryffindors socializing over libations, snacks, and greying underpants on Friday evening before the Night of a Thousand Wizards. It is our dearest hope that a few hours relaxing and Snape-ing will provide a much needed break between the stimulating formal programming of Friday afternoon and the excitement and mayhem of the Night of a Thousand Wizards.

Where: The Sitting Room at Spinner's End (hospitality suite in the conference hotel TBA - currently unplottable)

We kindly ask that you R.S.V.P. via the poll located here.

Fill out the Snapecast Meetup Poll

Our official poll for the Infinitus Meetup is up. Please fill it out here before May 29.

Snapecast has a Snape meetup comm for Infinitus over at Livejournal. If you are going to the con and want to meet up and Snape then please come on over and join!

Although any good Snape fan is well aware of the fact that the professor does not actually die in the last book, Warner Brothers has announced that the Snape death scene has been filmed. At least we know he'll be in the last film! Now let's hope that the scene is longer than 2 minutes...

In Episode 35, some of the Snapecasters performed a dramatic reading of the "Don't Call Me a Coward" scene from the script for Harry Potter and the Halfblood Prince. Please consider this the closest thing we will get to a corrected version of the film.

You can watch it here on the Snapecast YouTube channel.