Spiderwebs Of Dreams by Yuuo 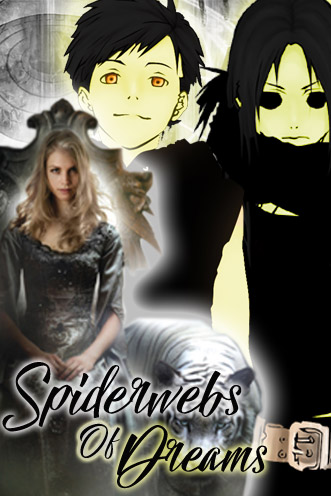 Edward Elric is trapped under his family's fussiness, something at once touching and wearisome. They're being so obnoxious about it that his aunt and uncle made peace with Envy so they could all three join the youngest Elric brother and their honorary sister in keeping vigil over him, dooming him to being stuck on the oversized couch bed in the living room of the brothers' side of the duplex they share with their father and adopted aunt and uncle in Queen, NYC.

Honestly, people, just because that transmutation accidentally killed him didn't mean he wasn't just fine. The Gate kept him from truly dying, he had a deal that they needed to start trusting, and now all he feels is tired and like a bruise, this sort of imprisonment is hardly necessary.

But that transmutation had another effect besides Edward's brief encounter with death, the energy of it vibrating along the thread that connects the Gate to the abyss, a piece of the Gate's power that sectioned away during the breaking of Order and Chaos; a vibration that attracts the attention of the abyss given form, Dreams Made Flesh.

Jaenelle Angelline's appearance in the living room puts most of Edward's family on the defensive over their long-suffering charge, but both Edward and Alphonse talk them down; they could do nothing against the woman who stood in their living room, asking them for help.

A help she desperately needs; because while Witch can harness the power of the abyss, necessary to break the power of the Blood that have tainted the Old Ways, Jaenelle's flesh would be burned up in the process. But that thread's vibration sang of someone who survived channeling a deeper and darker power, and that may just be the help she needs.

So Witch sought the Gatemaster, the abyss and the Gate reuniting for the first time in millennia.

Edward agrees to go to the realm of the Blood, and after Alphonse puts his foot down on everyone else's that their protests are heard and overruled, the family packs up to accompany the boys to the troubled world. They may be thwarted in keeping Edward banished to bed rest, but their irritating fussiness refuses to let either him or Alphonse do anything with the Gate without them there. Envy's even willing to tolerate Hohenheim's presence, if that's what it takes to keep the brothers who fought to give him a family again safe.

Because while it may have been the Gatemaster that Witch sought out, it was their Superman and his Kryptonite that was answering the call for help, and their family's foundation rested on the superhero and his strongest weakness. For their own survival, they have to protect the boys from the rain.

Finished? Are you kidding me?