Tweak says, "A thing of beauty& a joy 4ever" 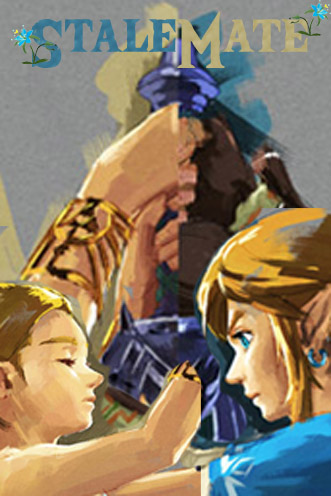 As Princess Zelda grows, King Rhoam sees a need for her to have her own guard, a special knight to guard and defend her while she focuses on her studies, on awakening the sealing power within her. His captain of the elite royal guard suggests his son, a young man only a year older than the princess, by the name of Link. He's already skilled with the blade, and showed a level of devotion the captain had rarely seen even in his own men when the boy's sister was sick not but a year before.

Deciding that the two would make a good match, Zelda needing a companion to the various places of worship she would have to pilgrim to in her studies, and Link needing someone to ground him, Rhoam agrees to assign Link to his daughter.

At first, the young teenagers are reluctant to warm up to each other, sticking to their roles and nothing more. But what starts as a working relationship warms to a friendship, and blossoms into a secret romance, that quite frankly, Rhoam approves of.

Then the prophecy of Calamity Ganon's imminent return makes Zelda's studies all the more important, and Link's steadfastness becomes the only thing that keeps her from going crazy at her own failures. It soon becomes obvious that Link was meant to be the Hylian Champion in the upcoming battle, and claims the Master Sword to protect his princess with.

But while his mastery of the Sword grows, her powers remain locked away, and failure after failure drives a wedge between the two hearts.

And it has devastating effects.