For This, I Was Kept ~ by Edward Elric 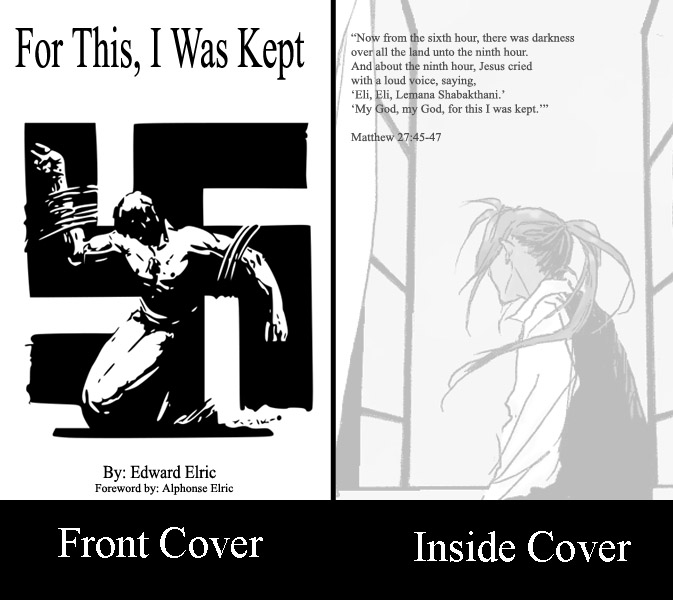 Synopsis: The cautionary and gruesome autobiography of Edward Elric, detailing his life after death in a world parallel to his own, where love was a crime and God only pretended to be kind.

Chapters will posted upon completion and linked here in order.

Part One: London
The Wages of Sin

"He will settle His arguments with Israel by sending it far away.
Like a hot desert wind, He will drive it away.
This is how Israel's guilt will be forgiven;
This is how its sins will be taken away."
Isaiah 27:8-9a

"In fair Verona, where we lay our scene,
From ancient grudge break to new mutiny,
Where civil blood makes civil hands unclean."
-William Shakespeare; Romeo and Juliet; Act I

Part Three: Alfons
Out of Egypt

For each ecstatic instant
We must an anguish pay
In keen and quivering ratio
To the ecstasy.

For each beloved hour
Sharp pittances of years,
Bitter contested farthings
And coffers heaped with tears.
-Emily Dickinson; "For Each Ecstatic Instant"

Turning and turning in the widening gyre
The falcon cannot hear the falconer;
Things fall apart; the centre cannot hold;
Mere anarchy is loosed upon the world,
The blood-dimmed tide is loosed, and everywhere
The ceremony of innocence is drowned;
The best lack all conviction, while the worst
Are full of passionate intensity.

The darkness drops again; but now I know
That twenty centuries of stony sleep
Were vexed to nightmare by a rocking cradle,
And what rough beast, its hour come round at last,
Slouches towards Bethlehem to be born?
-William Butler Yeats; "The Second Coming"

He said, Marie,
Marie, hold on tight. And down we went.
In the mountains, there you feel free.
I read, much of the night, and go south in the winter.

What are the roots that clutch, what branches grow
Out of this stony rubbish? Son of man,
You cannot say, or guess, for you know only
A heap of broken images, where the sun beats,
And the dead tree gives no shelter, the cricket no relief,
And the dry stone no sound of water. Only
There is shadow under this red rock,
(Come in under the shadow of this red rock),
And I will show you something different from either
Your shadow at morning striding behind you
Or your shadow at evening rising to meet you;
I will show you fear in a handful of dust.
-T.S. Elliot; "The WasteLand"

"Now from the sixth hour, there was darkness
over all the land unto the ninth hour.
And about the ninth hour, Jesus cried
with a loud voice, saying,
'Eli, Eli, Lemana Shabakthani.'
'My God, my God, for this I was kept.'"
-Matthew 27:45-47