Tweak says, "Guess there's a pill for that."


Summer 1977. A time of blockbuster movies and severe heat, much like today(it's over 90 in Seattle, at night, as I write this, and going into triple digits tomorrow). And also, this was when Stan Lee decided to make inroads into the world of rock & roll, because I can promise you, DC couldn't.
So they released this, which is now an incredibly rare and valuable collector's item(I wish I still had it, but I only have scans).
A personal note, as I have memories bundled with this thing. I was 8, at my grandma's house in Kingstree, SC, for the summer. I remember first reading this sitting on her porch swing overlooking her garden. It was in the same pile as a tabloid-sized Batman featuring the first GA appearance of Two-Face. And a newspaper nearby had an ad visible for someone performing named "Elvis Costello." It was around 11 am and I was drinking iced tea. That's what I remember about this comic.
I bought it not because it had KISS but because it was written by the guy who wrote my favorite comic, HOWARD THE DUCK. 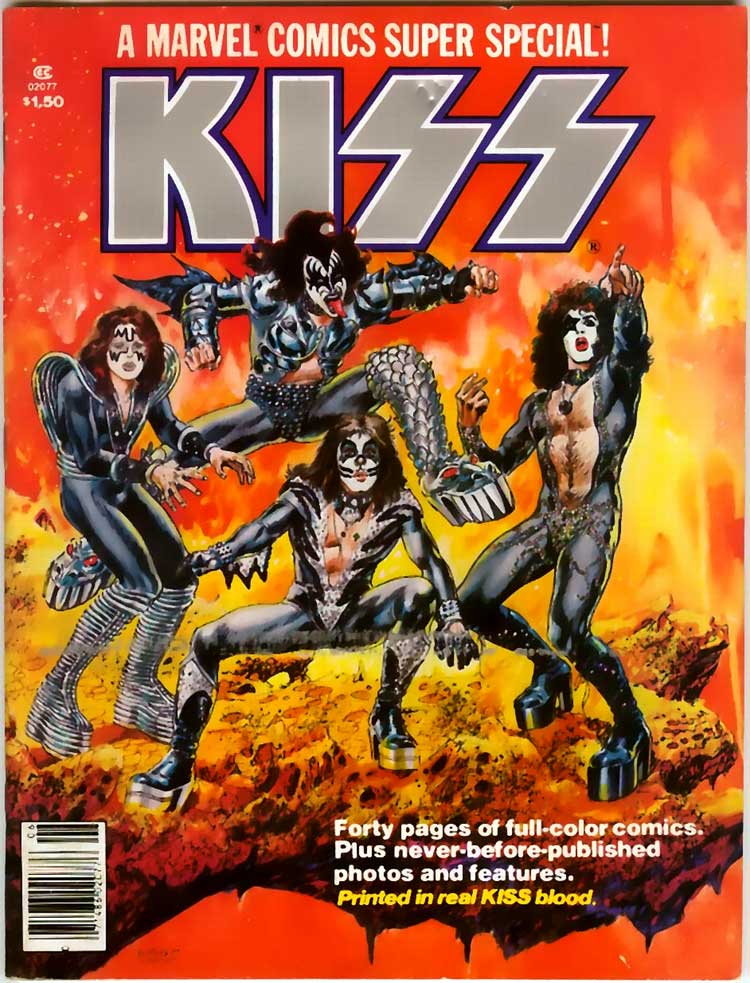 I didn't become a KISS fan, then or now(not even when you could do it ironically), but my lord, this was a fun comic. But then again, it was rare in the 70s for a Marvel comic not to be at least a little fun. And it was a perfect totally silly Summer thing. KISS. Mephisto. And Dr. freaking Doom. So here you are, as much of the highlights and some of the extras as I can post, including pictures of them getting their blood actually drawn to be mixed in the ink. Youngsters may not realize: this opening? It's as close as you came to seeing their actual faces, and believe it or not, that mystery was a BIG DEAL in the 1970s. And this could not be a more 1970s book. Art here by Alan Weiss and Sal Buscema. Size limits kept me from posting John Buscema's chapter with Mephisto--sorry!
Mods: this was a 72-page magazine. This is 13 pages of a 40 page story, one-third of one article, and one single-page fake ad. I have also included Gerber's 2-page intro in its entirety. I believe this is all within limits.
First: the opening, which is the best part of the comic. What's truly funny about this opening is that Gene Simmons is in fact a wizard at accounting(as is Mick Jagger) and always thought of KISS as a business, first and foremost. 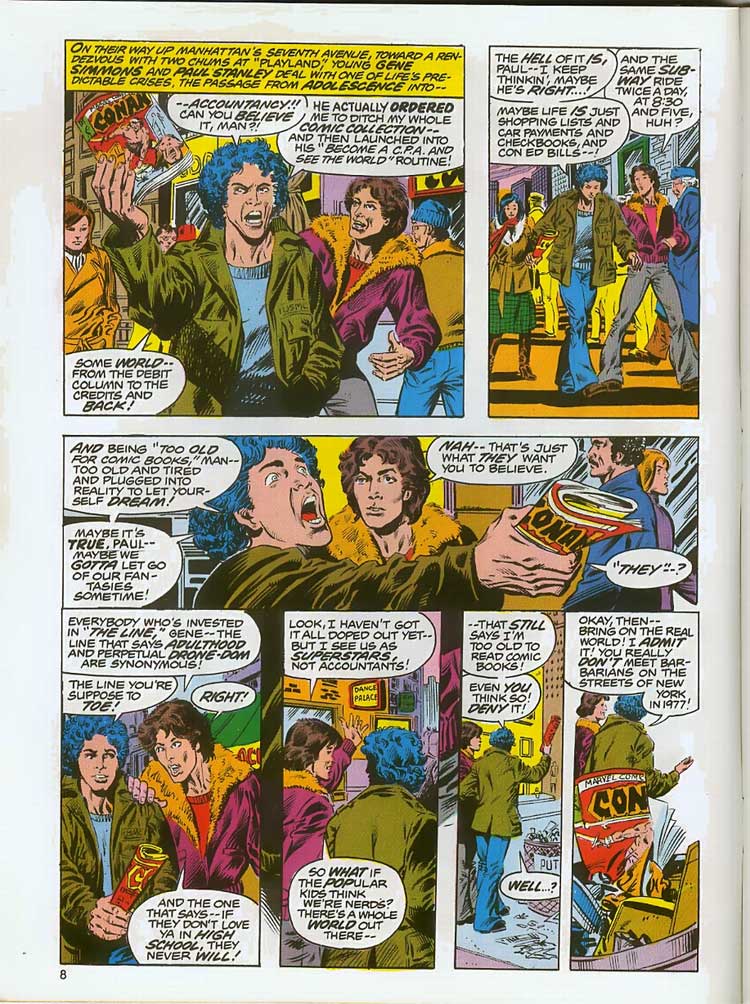 And the Fashion Police make an arrest. 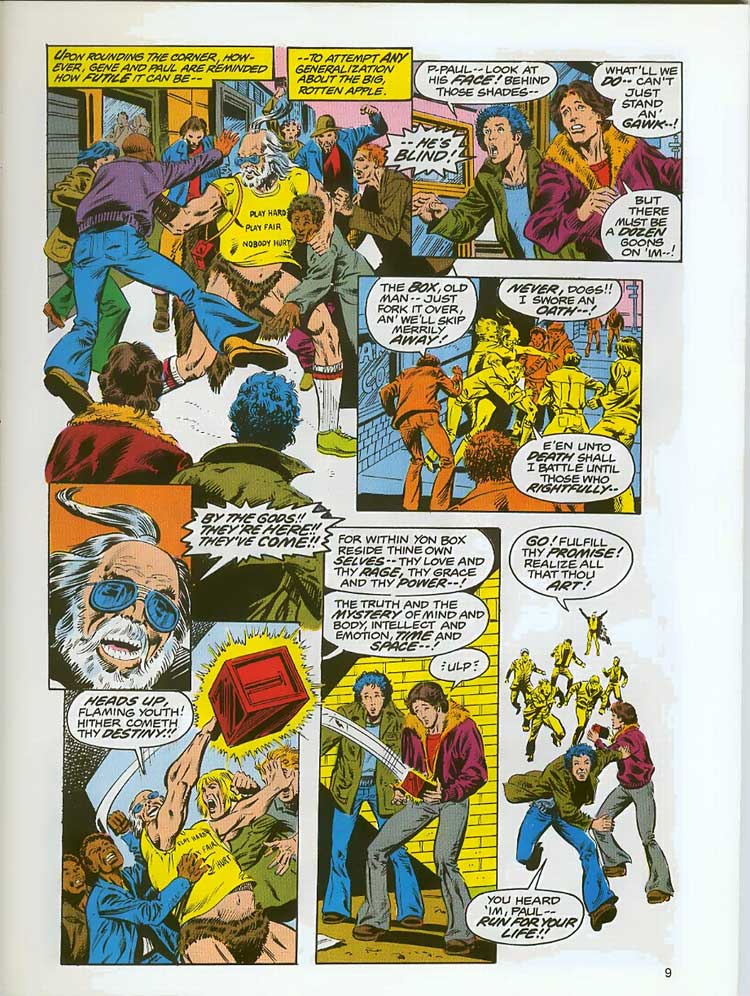 And I gotta say, this old blind hippie guy without pants? Weirded me out as a kid, and still does.
Was New York in the 70s a place where a guy could walk around like that and nobody remarks on it?... 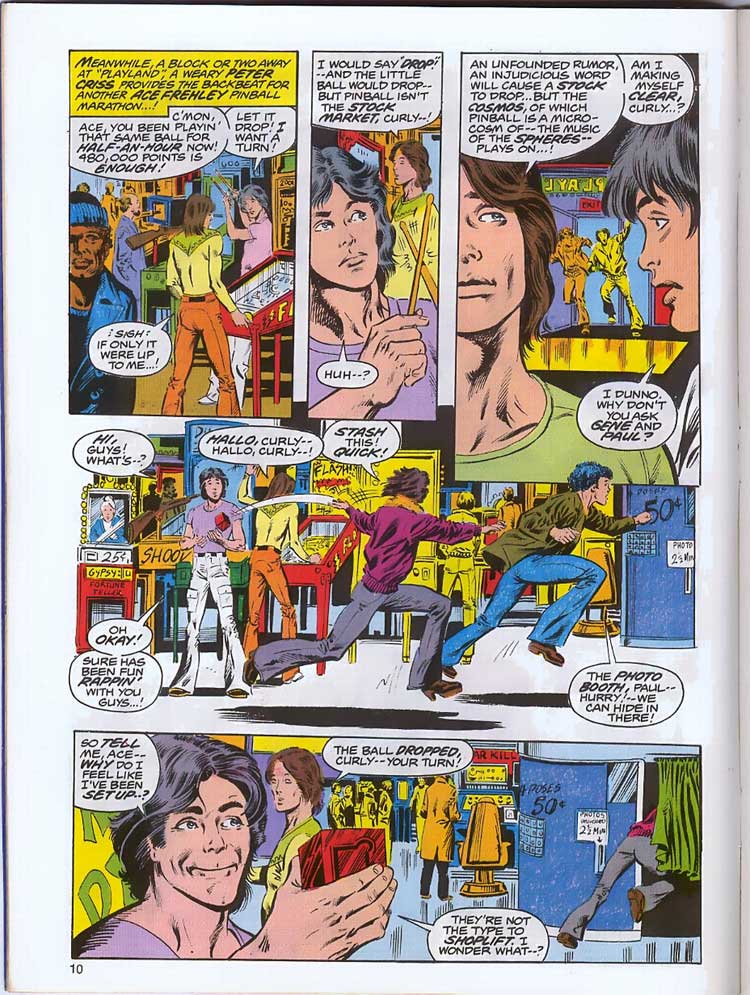 That's right, Ace Frehley calls everyone "Curly." And is apparently an acid casualty. And by the way, that expression on Peter's face? Awesome. I like Weiss. 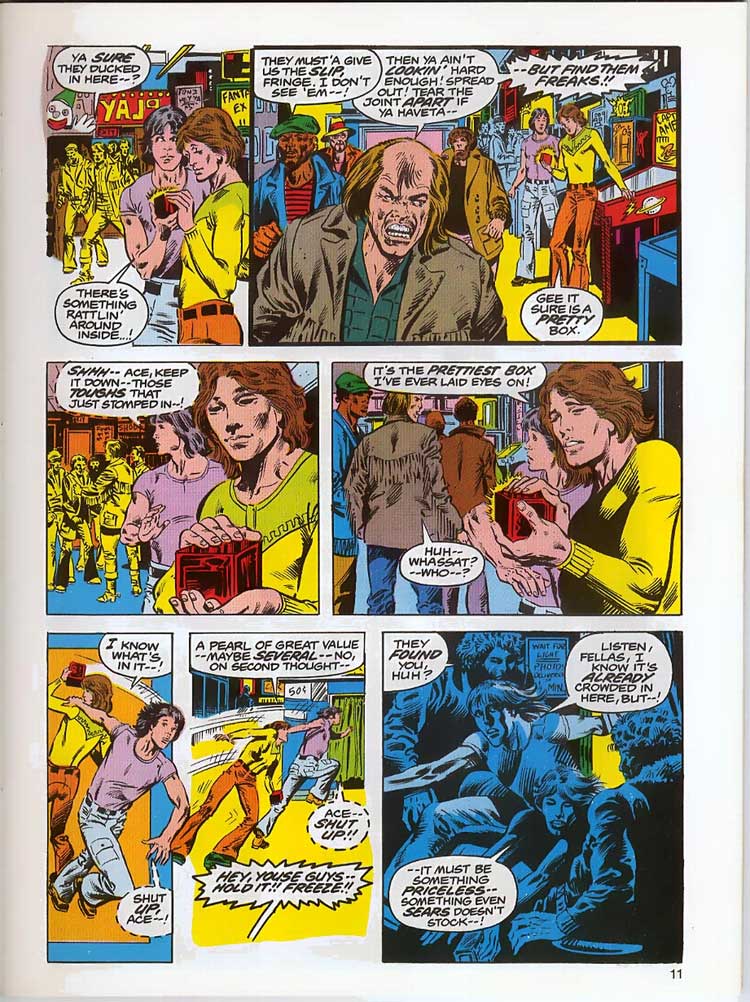 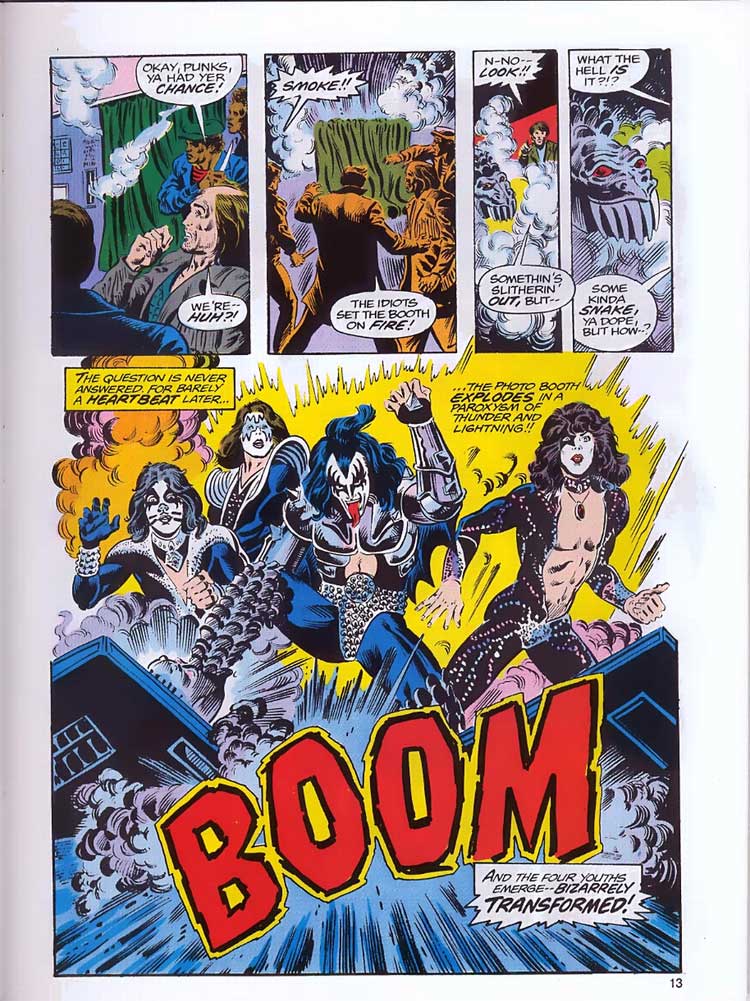 Hey! All you complaining about Star Sapphire's current outfit? Okay then, explain what Paul's wearing, please. 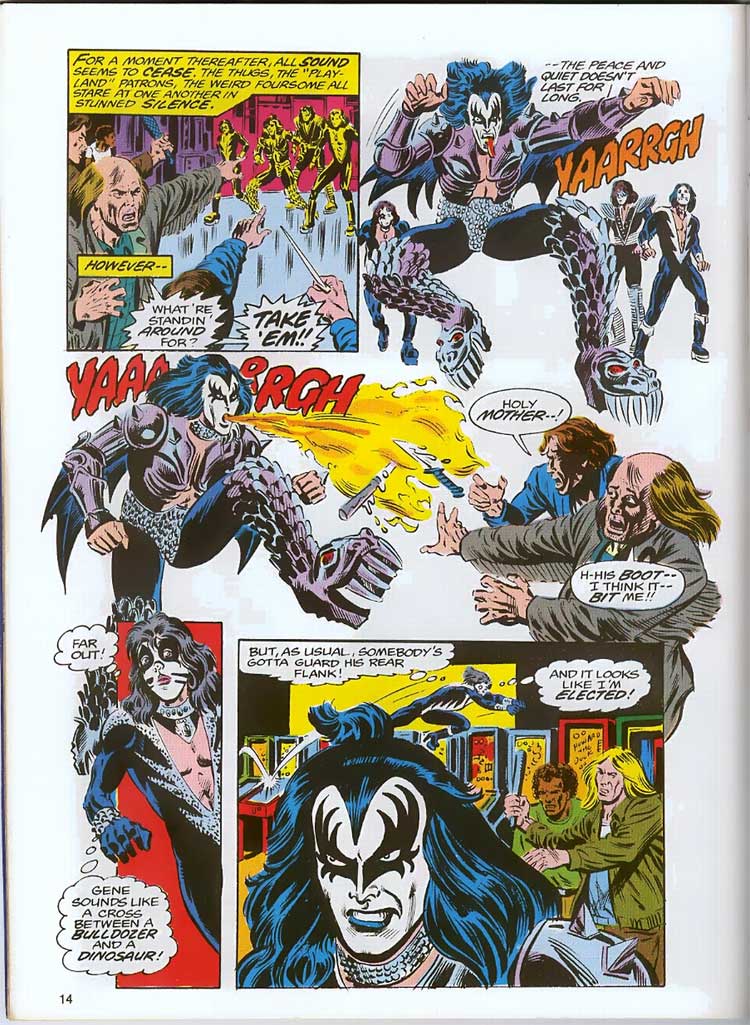 And Paul? He defeats people by making them sad. Kind of like Grant Morrison's "Crying Boy" from DOOM FORCE. 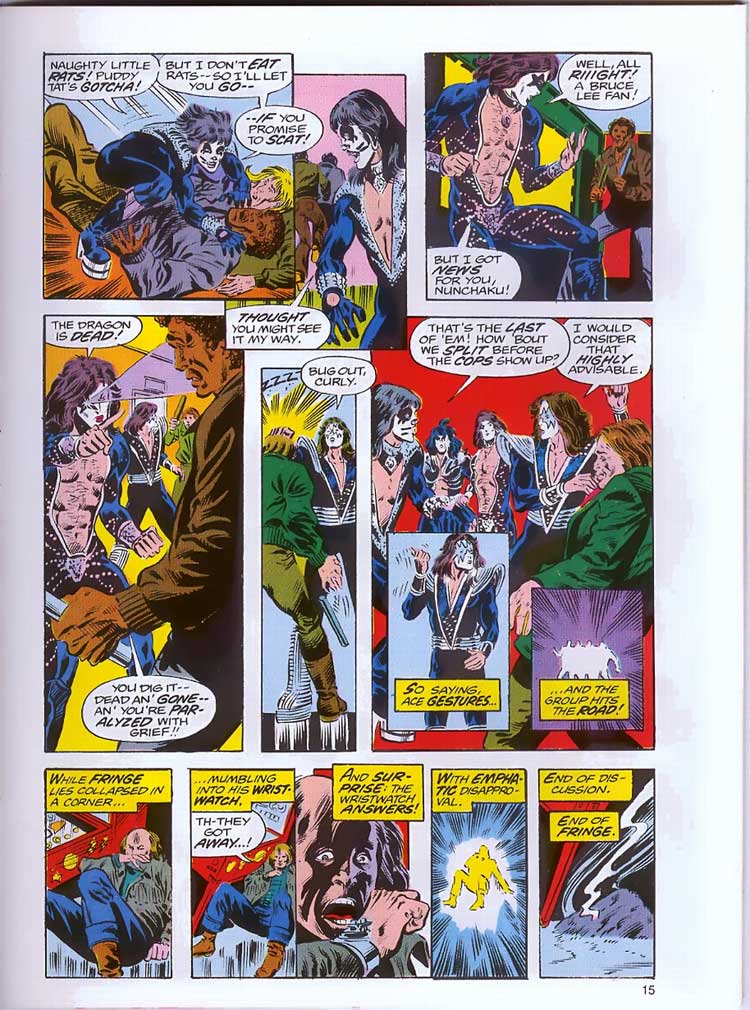 I gotta say, i always liked Gerber's omniscient narration, wittier(while still in a very Marvel style) than most.
I'll also say this would have been a perfect Elf With a Gun moment, but ah well. 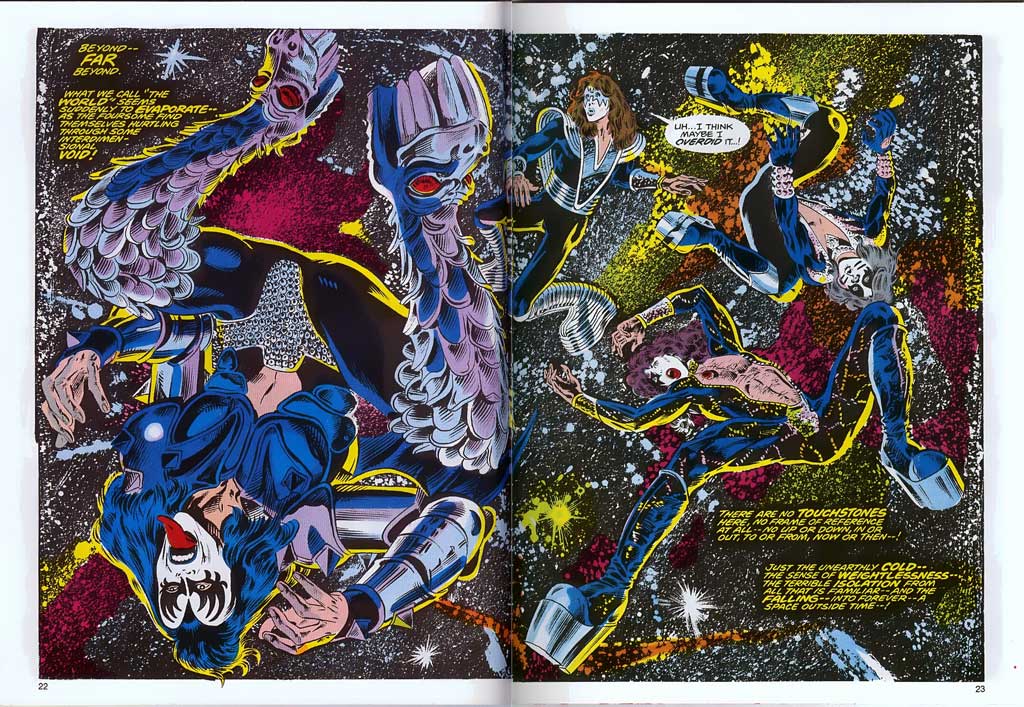 Anyway, in between they met Dr. Doom, trashed some Doombots, got caught in a patented Gerber Interdimensional Vortex(tm), go to Hell, beat up Mephisto, go to some...parallel cat world, beat up some furries, end up here, destroy more Doombots, and next thing they know they're all being sucked. No, not in the way a 70s rock god would want. 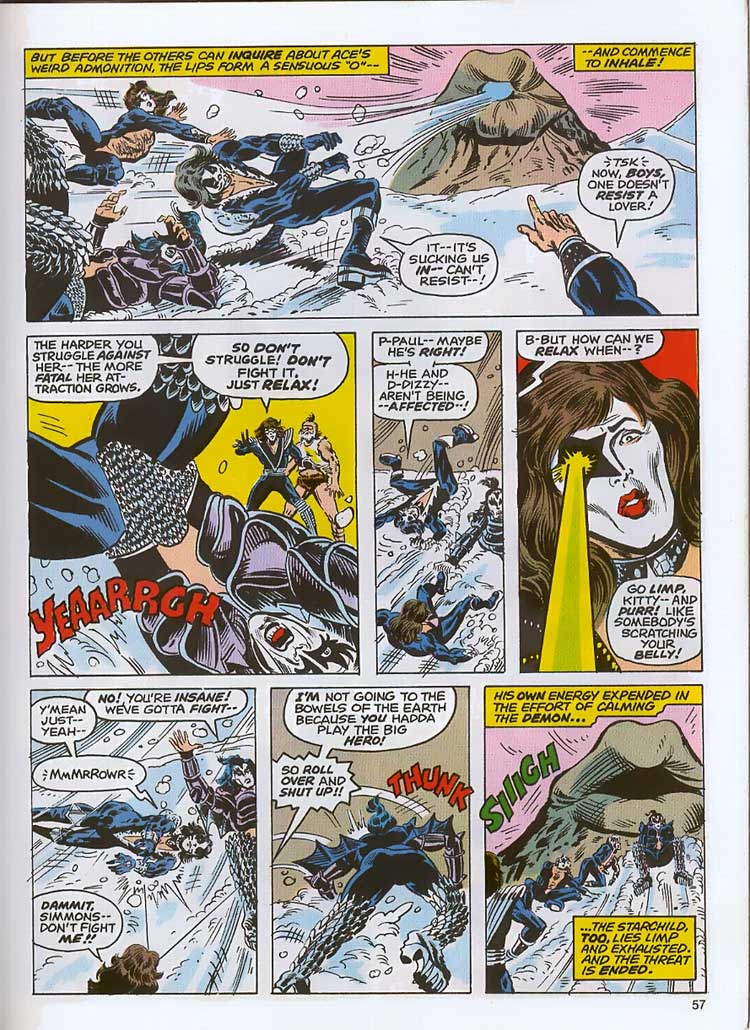 Though I hear groupies can seem this way if you're on lots of acid.
And THEN...DOOM HATES MIMES! 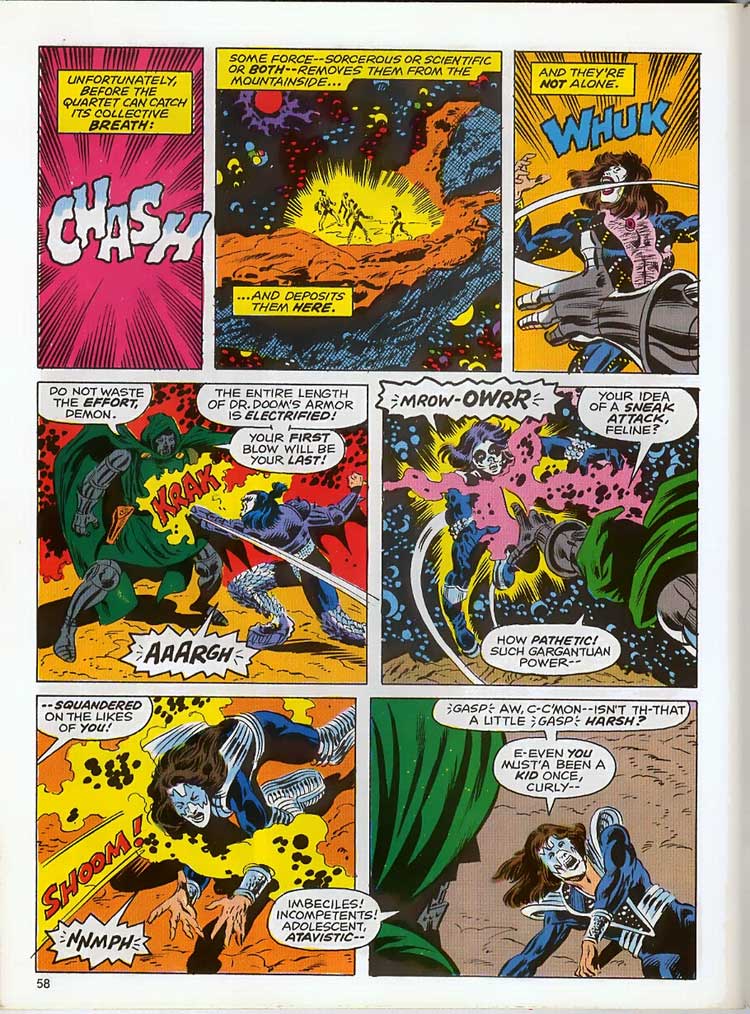 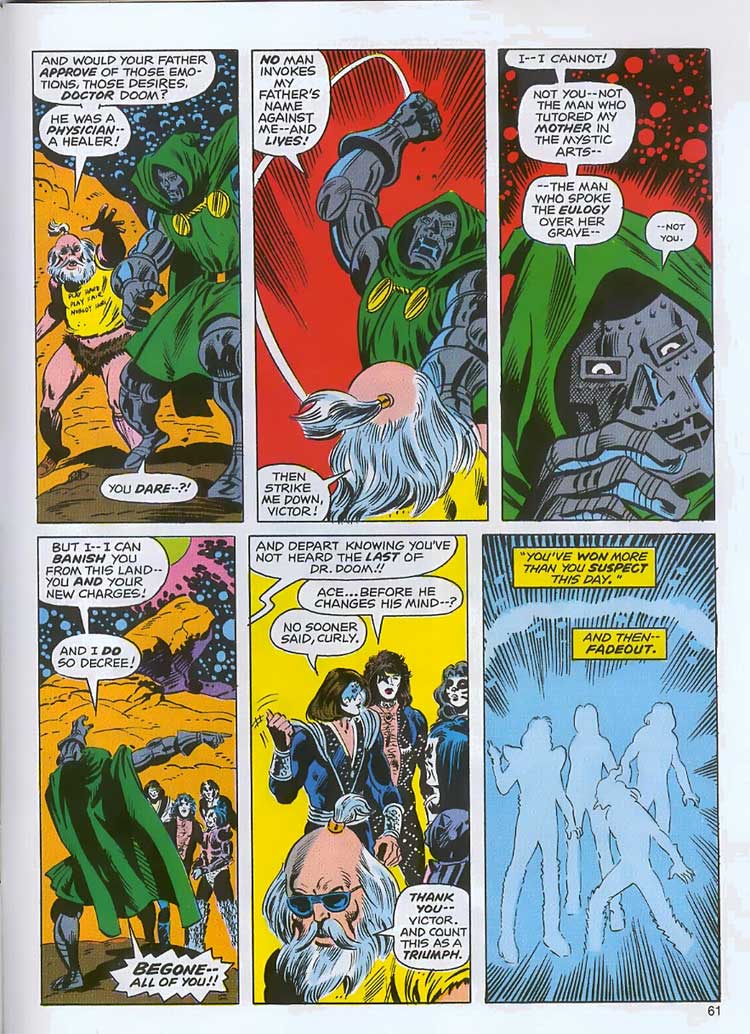 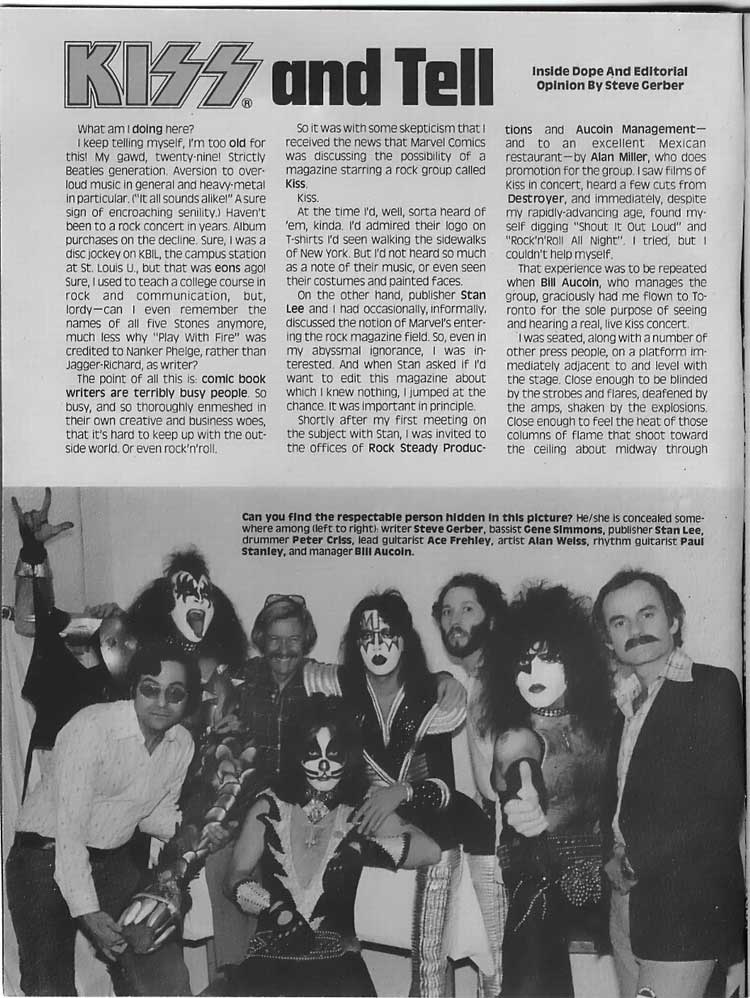 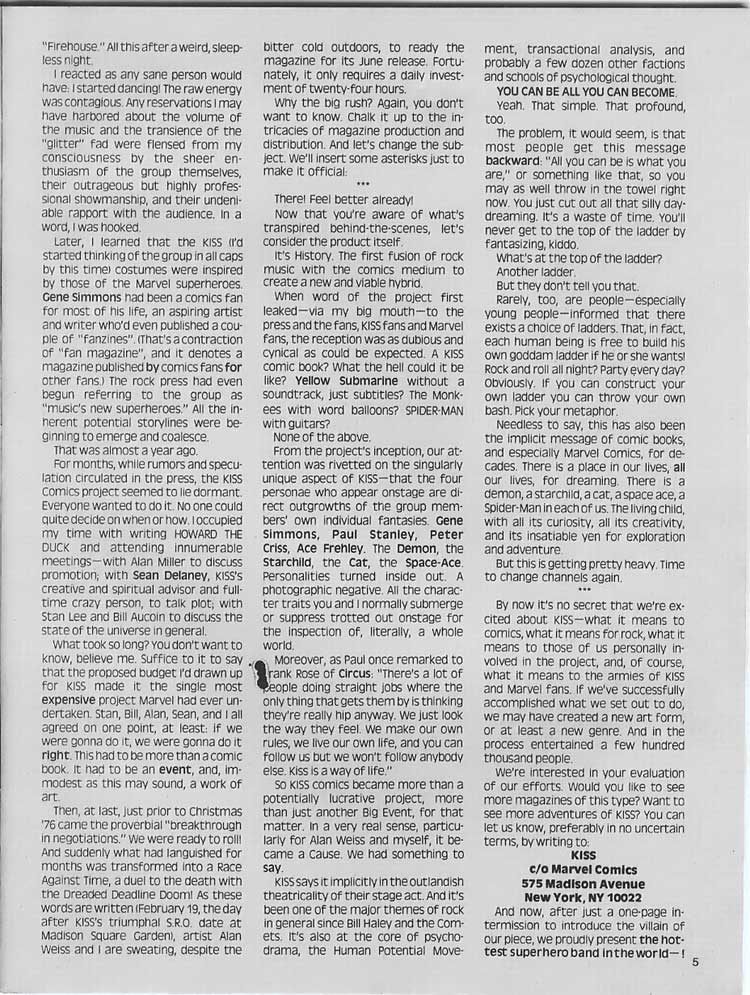 And for you scoffers, that's right, here's their damn blood. In the comic. You're holding. Right now. Yes, this was long before AIDS, why do you ask? 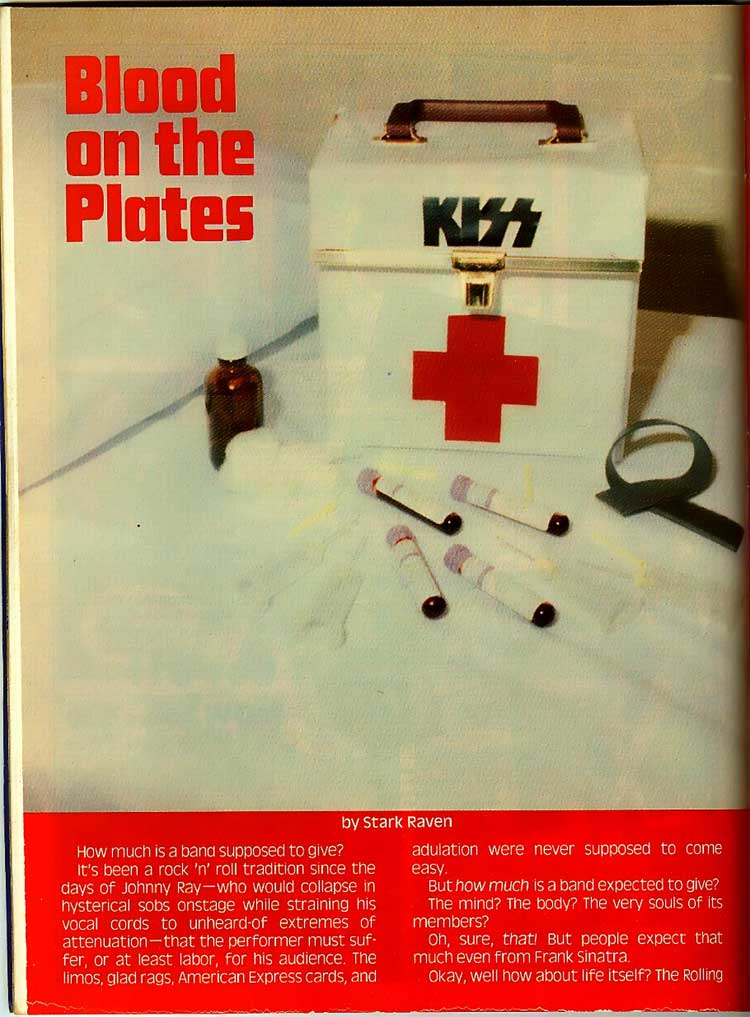 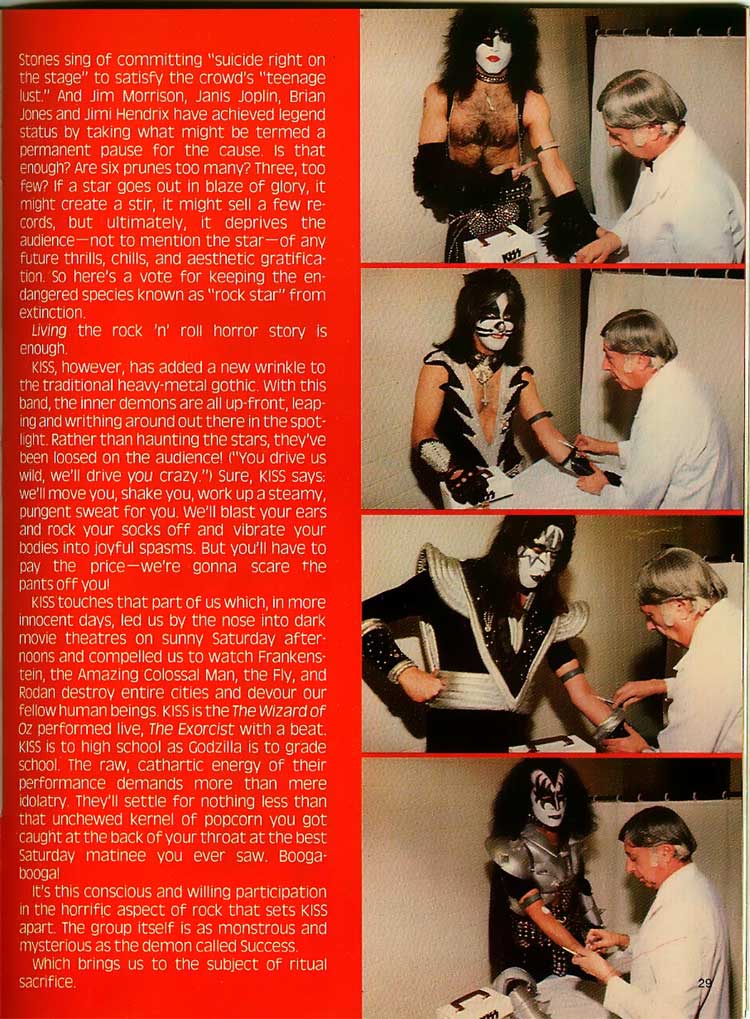 I love how they take such pains to quell those Satanism rumors. Finally: maybe you'd like a vacation?

Tie-in comics? Never this fun again. By the way: I also have scans of another legendary and little-seen 1970s comic: SUPERMAN vs. MUHAMMAD ALI. Want?
All pages (c)1977 KISS, Aucoin Management, and Marvel Comics Group.