Super Steph Series pt 2- Where the Cluemaster goes, can the Spoiler be far behind?

These actually have ALL NEW SCANS for #4, #5, and #26 to make the story flow better with the cuts I had to make. Anyway, these are good times
Basically, Robin #3, Steph's dad has broken out of jail 'long with this loser guy named Czonk (who breifly takes on the identity the "Baffler", the "Headbanger", then the "Baffler" again) and former superhero now criminal, Electrocutioner. They want money. 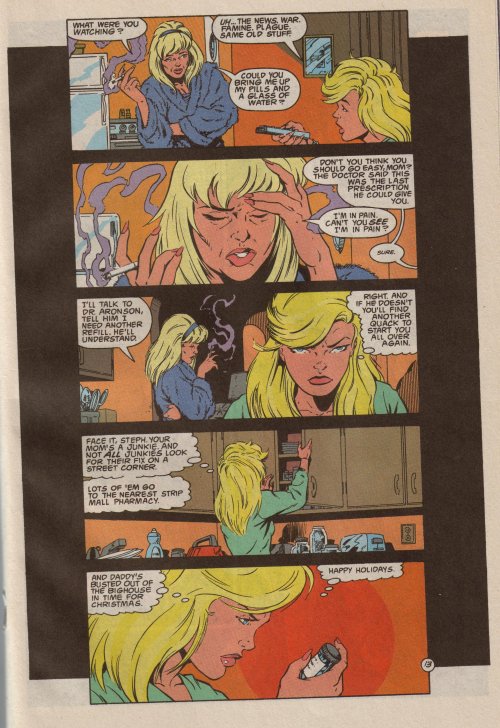 Steph's Mom- Suddenly blonde now! Get used to this, the woman changes her hair color, weight, facial structure and all around appearance more often than most people change clothes.

Tim's after the Cluemaster too, and he goes to the hotel the three criminals were staying at before... 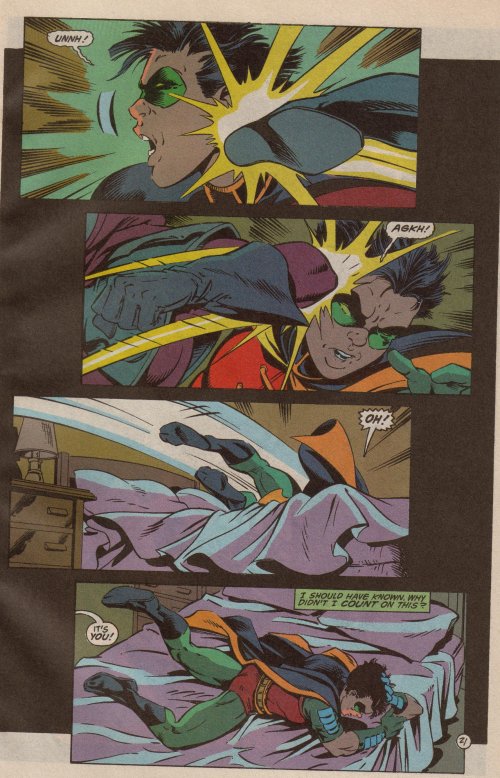 I think it's a real testament to Steph's natural skill she was able to sneak up on someone who'd been trained by freakin' BATMAN. This isn't the only time she sneaks up on Tim either. Makes it even more mind boggling she was told to go home. When someone with no training can do THAT to your sidekick, don'tcha think you'd want that person on your team? 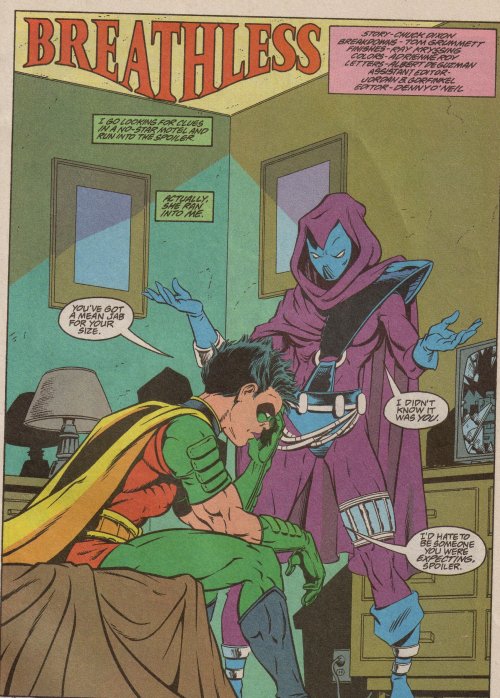 "For your size?" ...in the panels later in the comic, they look to be the same height, at most Tim is an inch taller. At any rate, I'd put Steph at normal height for a girl her age, and here at least she doesn't look stick thin (by comic standards). So Tim's just babbling to distract Steph now. 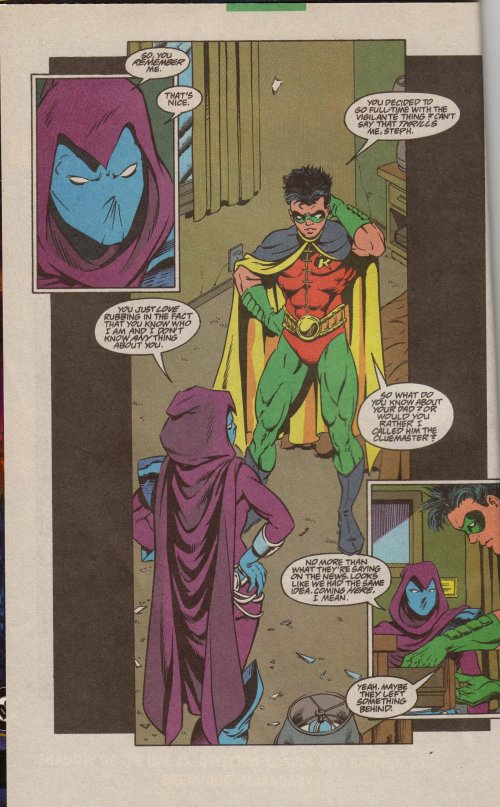 Anyway, the cops come in, and Steph and Tim hide under the bed until they leave. Tim has found a pad of paper one of Arthur's buddies has written on, as well as a newspaper with an article torn out. 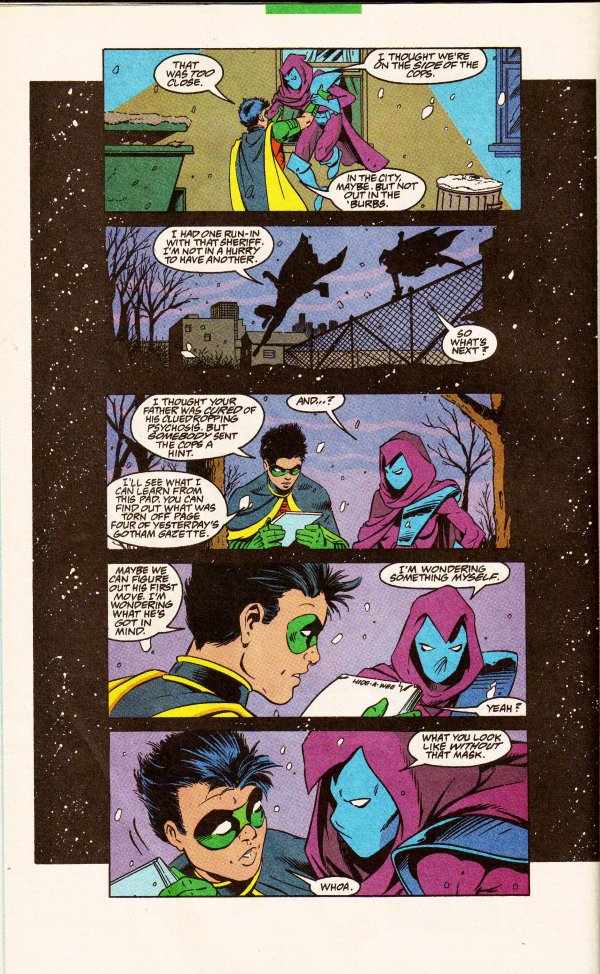 Steph's such a flirt. They meet up later. 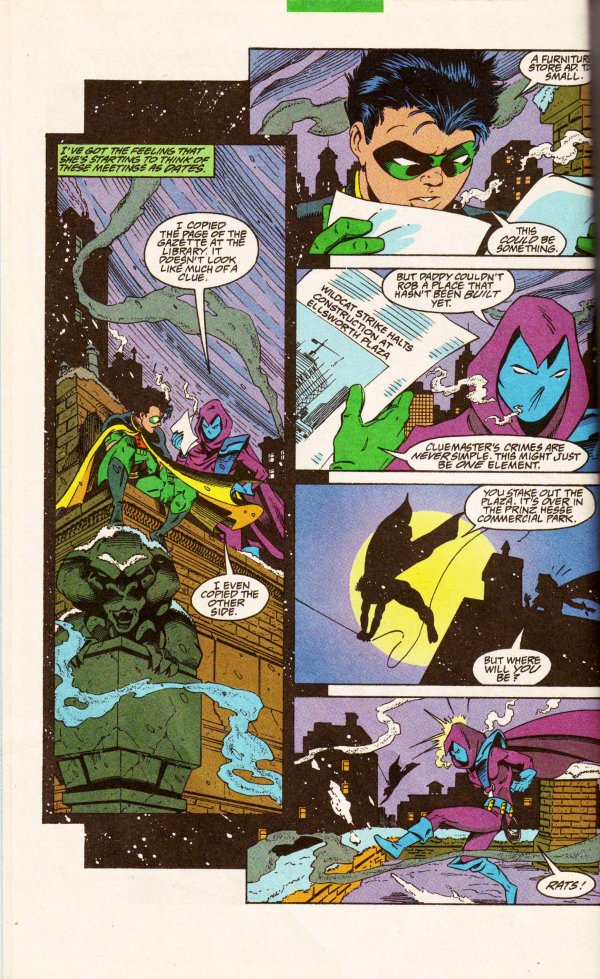 Oh, the exclusion. Actually, it was a really bad move on Tim's part, because he goes to confront the Cluemaster, and they both get trapped in the back of the armored car the crooks were stealing. And Arthur had a plan that himself, Czonk and Electrocutioner would bury that armored car in concrete and come back for it later when the heat's off them... 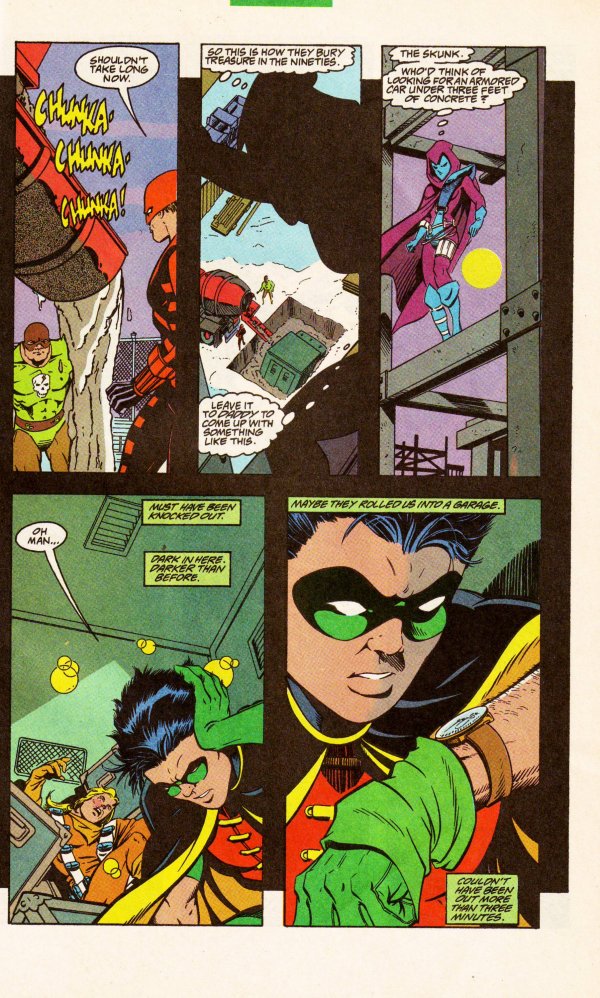 And so yes, Tim and Arthur are buried alive under many feet of concrete. Onstensibly for three days. And Steph has no idea. Should have clued her in, Tim (no pun intended, hehheh) 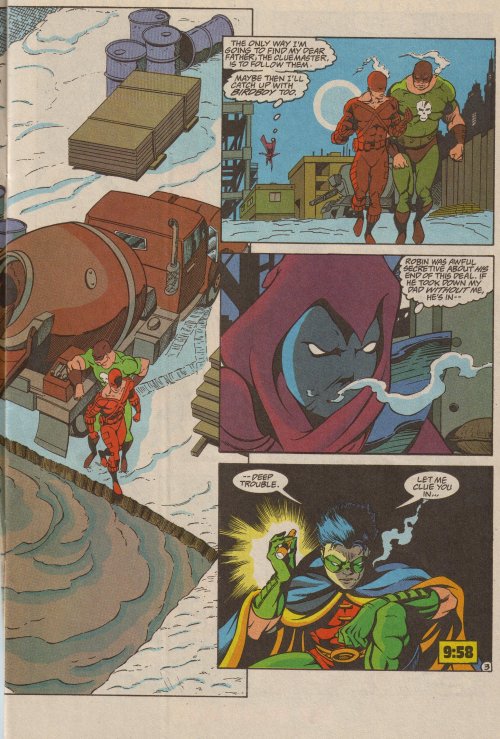 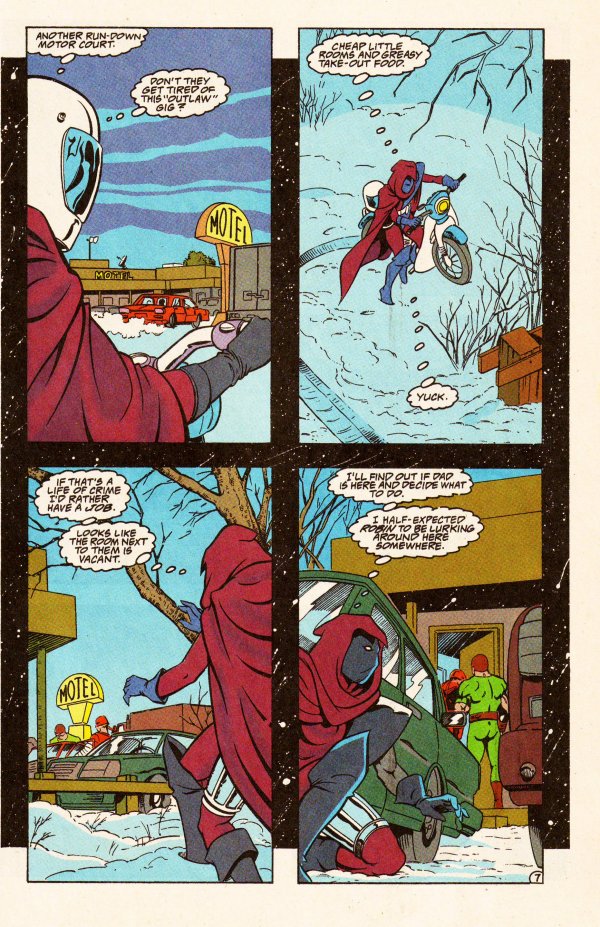 And camps in the next room hoping for some clues. 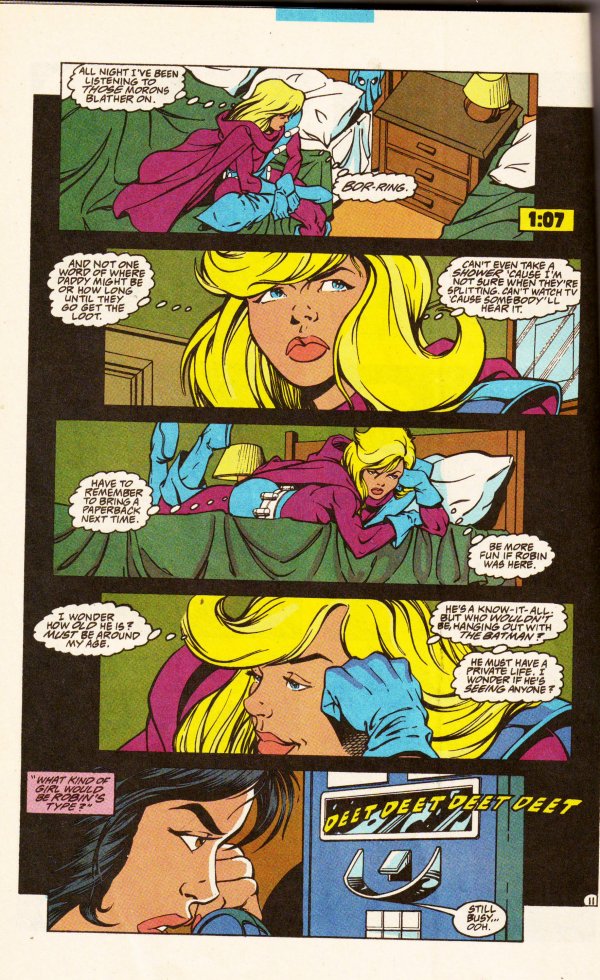 That girl is Ariana Dzchenko, Tim's current girlfriend. Tim has stood her up, as people buried underground are wont to do to their dates. 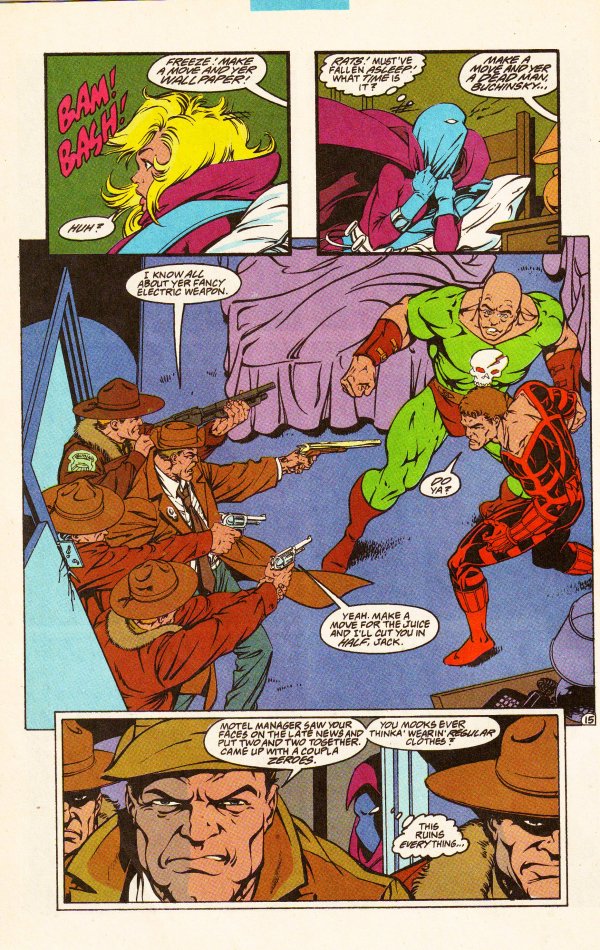 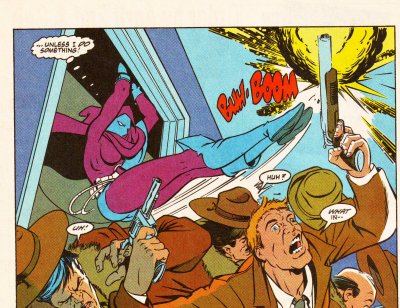 Thanks to Steph's interference, the two crooks escape, and Steph is able to follow them and let them dig up the armored car for her. 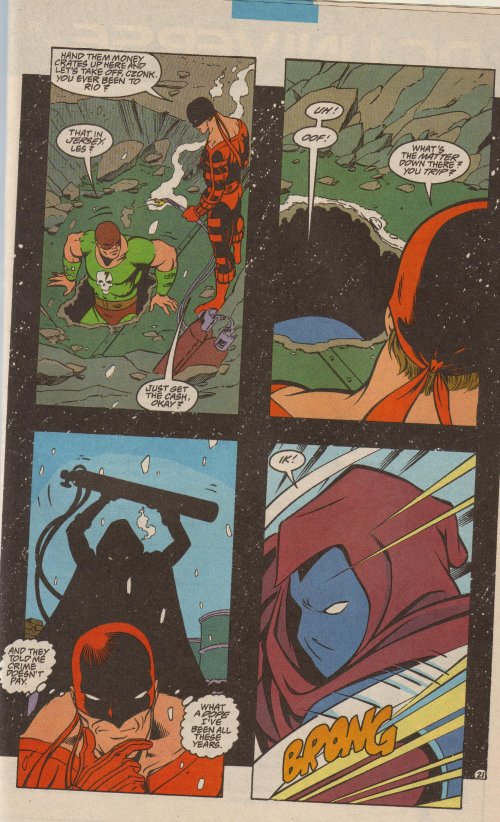 Clearly, Steph is a much better "Headbanger" than Czonk.

"Hey, I kissed you, but that doesn't mean I like you or anything!" Tim, I know Steph's awesome, but you have a GIRLFRIEND, at least have the decency to break up with her before you swap spit with superheroines. And you didn't expect Steph to be interested in you after you kiss her? You're leading her on, Tim!

Anyway, Steph's next appearance is in #15 as has been posted, and then # 16, when she's kidnapped by some friends of her dad...Tim comes to the rescue...

Gotta love Steph's priorities. And how she apparently mounts Tim and pins him to the ground after kissing him. Just a little forceful there...

Anyway, they escape, Steph mocks Tim for naming his car, then insists on coming along to bust the crime.

"Hey, so what if your father had you held hostage and you were chained to a bed for two weeks while surrounded by pervs and your mom's an addict! I'm having problems with my GIRLFRIEND!"

Steph and Tim go after Gulley, Tim wants to wait for Batman, but as usual, Steph jumps the gun, and Tim heroically takes a bullet for her.

Awwww, cute. Steph: Knows how to use jewelry to her advantage. Anyway, so the Cluemaster get's a visitor in jail...

Steph gets fashion points off for wearing a miniskirt and cowboy boots together (it was the early nineties I guess...) but she does know every inch of the phrase "Don't get mad, get even."

So, next appearance Robin #25, where Steph's awesomeness (and an appearance by Connor Hawke) was the only thing that made a preachy storyline about school shooting tolerable. Tim's friend bought a gun to school, so Tim and Connor go after a stereotypical  gang who are "arms dealers" (all of them are black, too, naturally)

"Homeys". Ugh. At least Connor's not bleached. And Steph's kick-them-in-the-back-of-the-head-when-they're-not-looking is her trademark apparently, she uses it again on the next issue, the Final Night Issue, the Robin 80-page-giant, that one issue of Batgirl...

For someone so paranoid about his own identity, Tim is dickishly free with his friend's real names. Not only does he say her name in front of Connor, but the criminal's. Why not give away her address while he's at it?

Go Connor! Defend Steph! Steph points out to Tim that Connor is infinitely cooler than him. Plus, he doesn't give away secret identities.

So, Connor, Steph and Tim beat up the arms dealers, but Tim's friend winds up getting shot by "Stereotypical Gangsta Black Kid" (At least Batman points out later Tim's friend could have easily been the one to do the shooting) Anyway, at the funeral, Tim sees Steph around, and afraid she'll know him without the mask, proceeds to flip out in front of his girlfriend.

I love how Steph is wearing that really preppy dress with A LEATHER JACKET and HIKING BOOTS. And then she rides off on a motorcycle. That is so Steph! And, poor Tim. His life is so hard.

Tim is working out his frustrations on the gym punching bag and pondering his budding split personality disorder ("I hate Robin. I hate Tim Drake. I hate both of us.") when he overhears some footballers plotting their revenge on stereotypical!gang. Steph appears out of nowhere to beat the crap out of them and get info about the gang's whereabouts.

Noticing football players are all white...

I love how Dixon (and Lewis) actually consider the difficulties Steph would have with her long blonde locks under her mask. I suspect that's why Dixon did the "ponytail sticks out of the mask" thing. But that looks stupid, so Jon Lewis (Or Pete Woods, I don't know who's decision that would be) had her cut it short! Practical!

I think the solution for her today, if she doesn't want to cut it sort, would be to pin it up in a bun under her mask.

So off they go, to save the day. 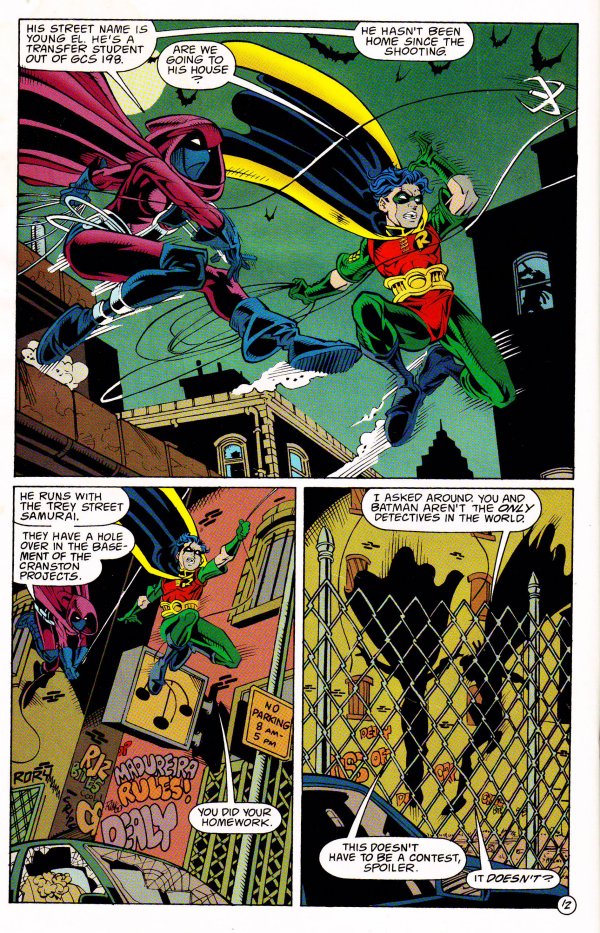 Anyway, they beat up stereotypical!gang. And Steph does the kick in the back of the head thing to save Tim from being shot again.

But eventually they must be saved by Batman. And he scares the hell out of Steph, just because. 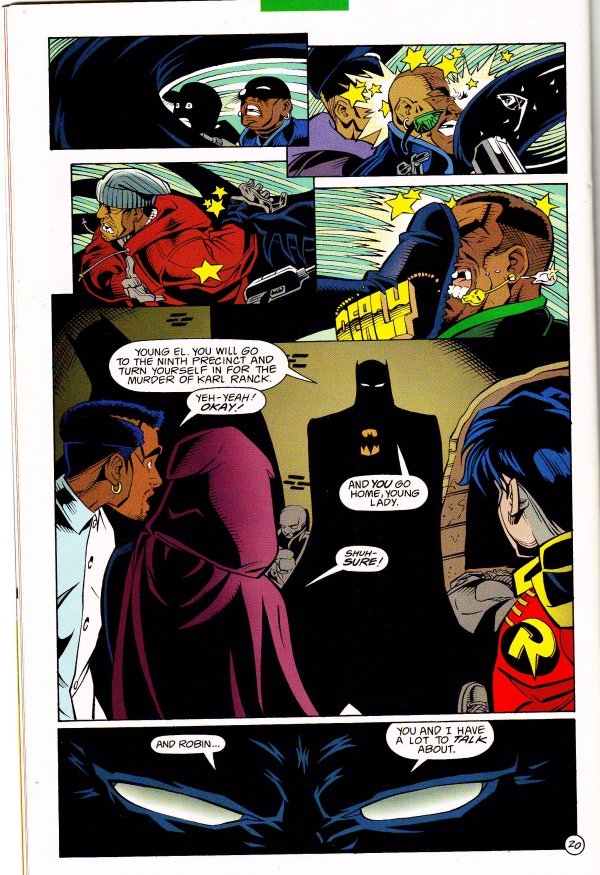 Tim and Bats have a discussion about Justice or something and the issue ends!

Next, I'm probably going to do a light overview of how they got together, though that wasn't inculded in my original upload, I have it all on my wiki, skip over the pregnancy (if you're super curious, as there are some cute moments, scans are available at my wiki) and go straight into Steph finding out Tim's ID (skipping over her crazy stalking of that Star girl, though)