Super Steph Series pt 13- The Return
Stephanie was killed. And forgotten. And all of that.

But, thanks to fan uproar, and Chuck Dixon, she eventually returned.

And thus, Steph defeated the two greatest foes any comic character ever had: Editorial death sentence, and Women in Refrigerators.

Truly, she is a heroine for the ages.

Kidding aside, I was lucky enough to be the one who chronicled Steph's return  on OSD. I recall many people telling me she wasn't going to come back, that DC was just screwing with us, that they couldn't wait until it was revealed to not really be her, so they could enjoy the Spoiler fans tears.

We start with Robin  #170, where for the first time in a very long time, Tim remembers he once knew this girl named Steph.

There's this new vigilante called Violet who wears way too many pads.

Note how Batman is still a HUGE dick. Yes, Tim, you should totally move on. Look how wonderfully Bats has moved on from all his losses! Oh, wait...

I sort of like the idea of  Tim being reminded of Steph every time he sees something vaguely purple. Imagine how moony eyed he must get when he eats eggplant.

Actually, I recall I did a Casstoon when this came out...*searches Deviantart archives* Ignore the awful art. I've gotten better since then!

Okay, I'll admit it, when I read that second panel I squealed REALLY LOUDLY and spat the water I was drinking onto the page. Not my proudest moment. But YES! The guy who answers in the last panel is Ives, by the way back to resume his lusting after Tim.

Anyway, Tim gets in a fight with Violet and gets a black eye. And then...

I love how he remembered the way she walked. Made me melt at the time.

Despite the end of the issues advertisement....

There were only two pages of vague Steph-ness in the next issue. 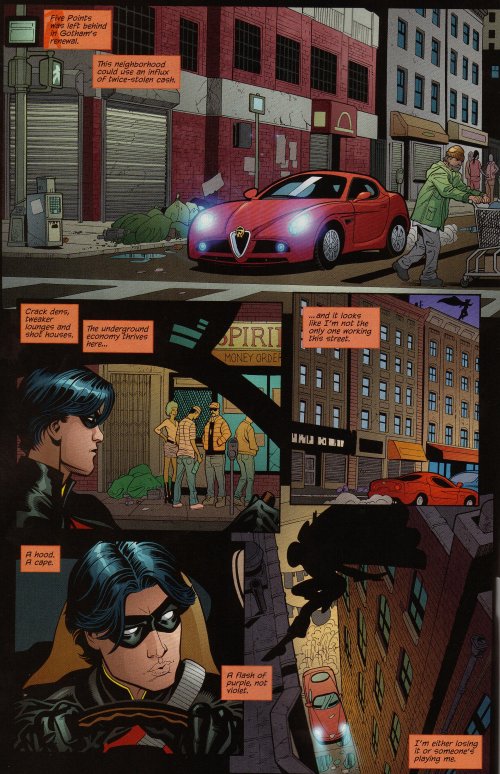 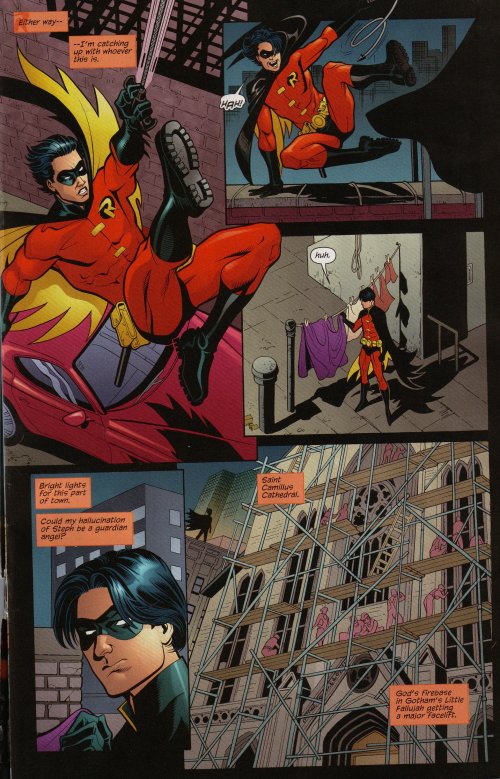 But in the NEXT issue, the mysterious Spoiler person unmasks... 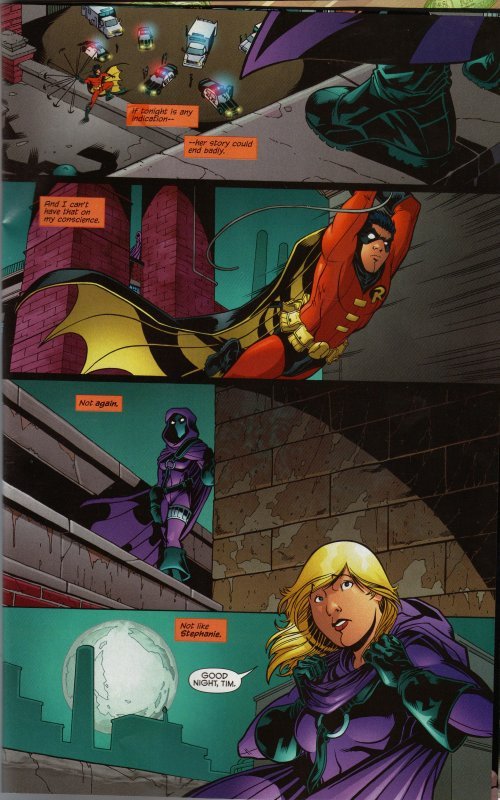 Thanks to the unnatural proportion of blonde girls in the DCU, as well as the crappy art, many people were still covinced that this wasn't Steph, but some other girl. Theories ranged from Greta Hayes of Young Justice fame, to Cissie to Cassie to Mia, to a Steph clone, and to Azreal in drag. I myself, was pretty much 99% sure it was Steph, though I knew better than to trust DC completely. It wasn't like Chuck Dixon to bank on crappy art or a cheap stunt to screw with fans about a character he loved as well as we did.

In Robin #173, things kicked into high Steph gear. Someone came to put a stop to a robbery...thinking the purple avenger was that Violet chick, the thug offered her money but...

The thug talks to the Penguin about all this. He thinks Spoiler is Violet The Penguins all "You idiot! Violet doesn't wear a stupid cape!" And the thugs all "She didn't want our money!" and the Penguin's says "Who doesn't want money? Okay, kill both purple girls."

Yes, Marcel looks an awful lot like DiDio as old S_D pointed out. He gets shot later!

Look at Tim's anger! It was a long time coming, him acting like he cared.

Tim apparently does hit girls who desecrate the memory of his loved ones.

CLIFFHANGER! But unlike me, and my scans_daily cohorts at the time, you don't have to wait! Basically, Spoiler Tim and Violet fight Sin Fang, Tim barks at Spoiler some more for wearing the costume, then hits Sin Fang with his car, Spoiler motors out, calling him "Boy Wonder" for good measure, and then Tim calls Batman for help. 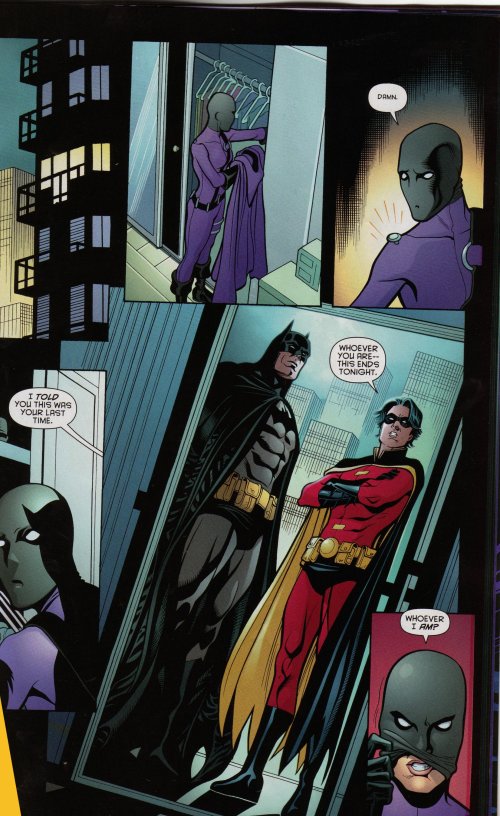 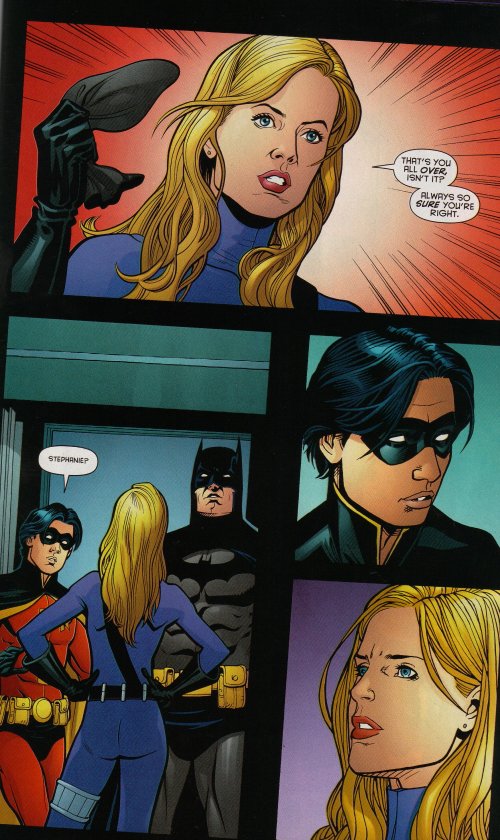 And that was when I squealed like the crazed fangirl I am. The best thing is, unlike the previous art, the second I looked at that panel I could TELL that was Steph, because Batista totally used Tom Lyle for reference on her. He went straight back to the source, which made her recognizable. (Well, to me, anyway.) He also sort of gave her Robin #16 hair.

Robin #16 (with layouts by Jiminez, art by someone else): 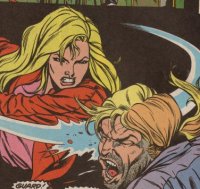 Anyway, where was I? 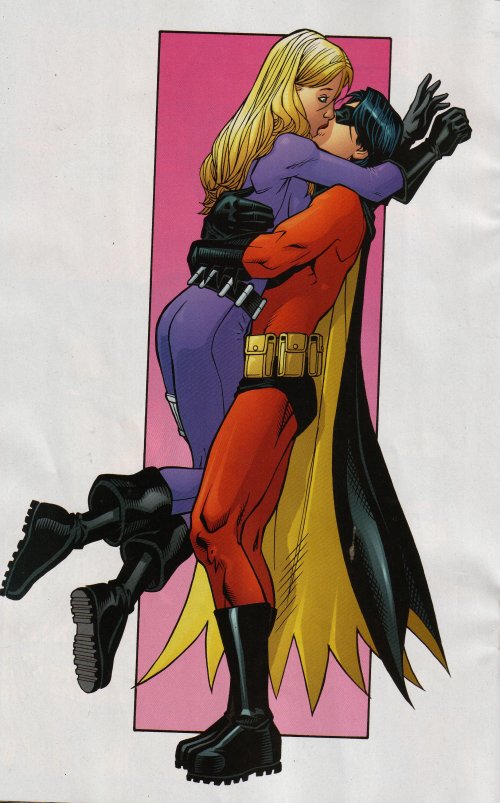 Win. Another thing I love about Batista is he drew Steph like an ATHLETIC TEEN GIRL. No Damion Scott watermelon breasts, she was obviously a very fit person, and he made her costume look way snazzy. 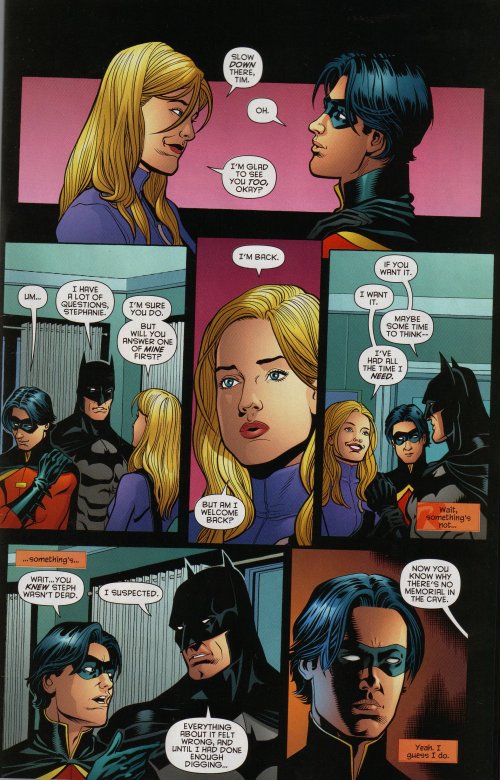 Weird, how this "revelation" (obviously mean to please us Girl Wonderers...and it worked, though the ham handedness was not lost on us) makes Batman somehow both less and more of a dick. Oh, Bruce. 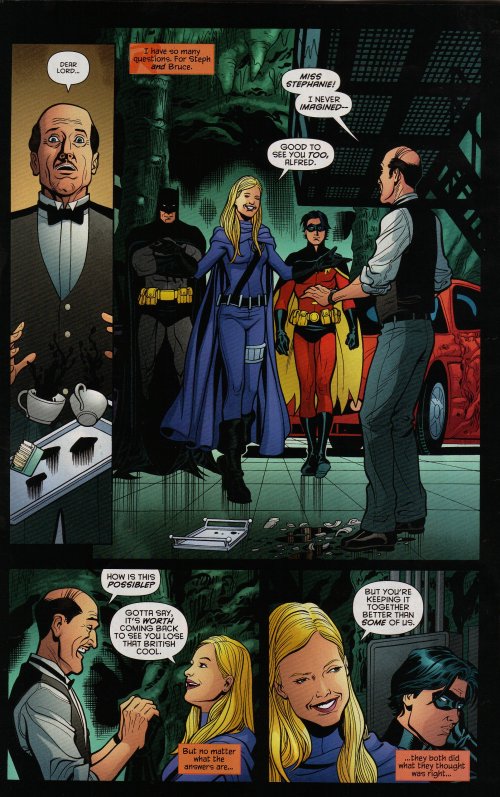 Alfred and Steph are win together. They should team up more. He dropped his tea tray and then they held hands! So cute. 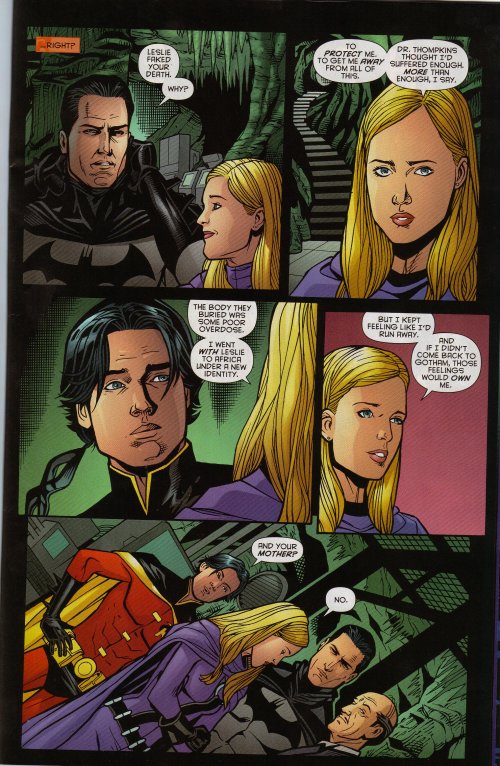 Yeah, Steph didn't tell Mom she wasn't dead. That's not nice. My default assumption is she was in a coma most of the time she was in Africa, or too injured to be capable of doing much. Once she DID get better...well, how do you approach something like that? Over the phone? Did they even have phones where she was? And consider the guilt she must have been dealing with, she probably thought everyone, even her Mom, hated her and was better off without her. I think it's something that needs to be explored, because it's very explainable.

So here's Steph's Mom, with her appearance changed yet again, though at least it's been a year and a half or something this time, so there's an excuse. 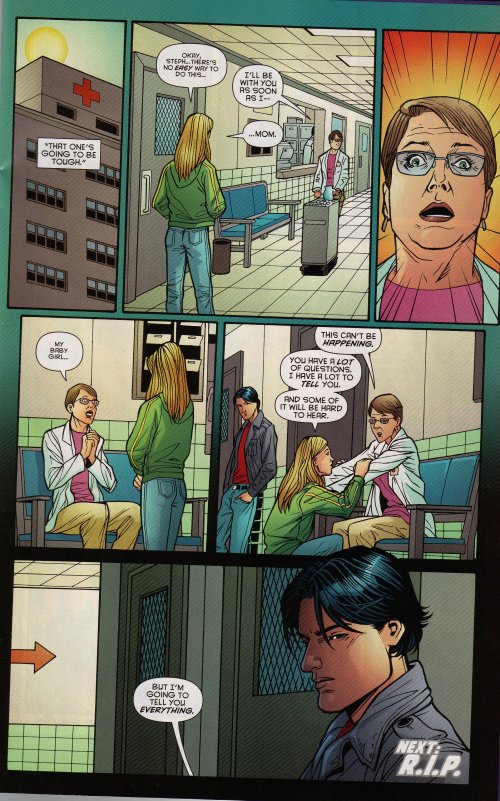 I imagine Dixon planned to follow up on that, but. You know.

Lets go to the Robin/Spoiler special, which examines a little of Steph's time in Africa and she is awesome and also has REALLY PRETTY ART.

The Special was split into two stories. The first one was fanstastic, illustrated by Rafeal Albequerque, and had Tim and Steph kicking ass and taking names. Also, Steph dragged Tim to a party and he moped a lot (until people started shooting at him, he seemed to cheer up) Steph said "This is good for Tim...He just doesn't know it yet. He needs to get away from the darkness. That's why I came back to help him." It seemed like Dixon was going to have Steph try to de-angstify Tim, but, of course, Nicieza came on and had her do the opposite. *sigh*

As excellent as that story is, I cannot post it,so if you want the coolness you need to get the Special yourself. Instead, here's some of the second story, which goes back to Steph in Africa. Leslie Thompkins is AWESOME in it, too.

And, of course, the art is stellar.

You should be warned, I'm not entirely comfortable with how the African people were presented here. Efia is a bundle of awesome, but well, Chuck still has some...issues to put it politely, and though it's only reflected very mildly here, it should be noted.

Steph helps a small African girl find her dog and when she mentions not really being comfortable in the open desert, the girl informs her Katavi only comes out at night.

"It was an editorial clusterf*ck, Efia. Only interesting if you like bad writing."

I told you Leslie was awesome. "Don't touch my vaccination or I will throw you bodily out of the car!" And oh, the sarcasm.

Steph uses the nearest available materials for a costume, and proceeds to take out like, ten guards.

Yes, the girl in the purple eggplant is Steph. SHE CANNOT RESIST THAT COLOR.

Of course she did, she's awesome.

"The hell there isn't!" : D STEPH! You are so...you! And behold her reckless driving.

Yup. And that is Steph, ladies and gentleman.

My last post will be a few old Steph backup stories from Showcase and whatnot. I was sent that used to be scanned on the deceased Even Robins site. They're nothing special, but they're decent and show Steph being strong, so they will be our epilogue. I hope you guys enjoyed these posts!