Super Steph Series pt 12- Ghost Steph, and various other Cass goodness
In my last post, someone anonymous told me I should post War Games and the Ghost!Steph stuff. Now, I would not post 99% of War Games unless you put a gun to my head, not to mention I only own two War Games-y issues- Batgirl #56 and Robin #130. Robin #130 was purchased for me by my Dad, on the basis it was an issue of Robin, and I have it stuffed somewhere in the comics box without a bag to protect it. War Games is the antithesis of why I'm doing these posts- to show Steph being cool and Steph-ish. War Games shows Steph flailing, crying, acting like an idiot, and being tortured gratuitously, all because the editorial at the time hated her/thought she was disposable. Most likely hated her, since there's a fine line between disposing of a character and making sure they die horribly, and as a fuck-up.

But, there is a point- the ghost stuff was pretty good. Cassandra was the only character who seemed to really grieve for Steph, or rather, Anderson Gabrych was the only writer who respected the character of Steph enough to acknowledge her existance and importance to those she left behind. So, we're going to post a tiny portion of War Games, five pages where Cass sees Steph for the last time pre...what happened. As well as some other relevant scans. Then, we're going to explore Steph as a spirit and the reaction Cass had to Steph's "death." Because it's good, moving stuff. Warning, though, it's pretty sad too.

First, one page, after Steph was fired, she went to Cass: 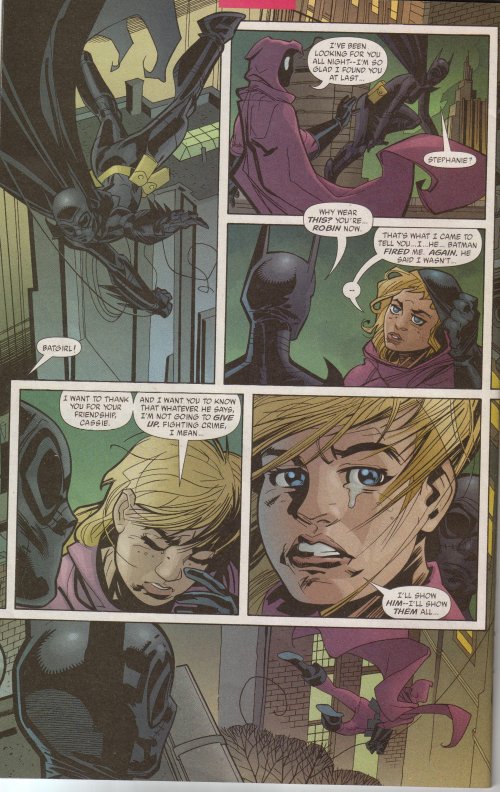 
The last time Cass saw Steph, to this date (NOT counting the Frank Tieri nonsense) from Batgirl #55, gang war in swing: 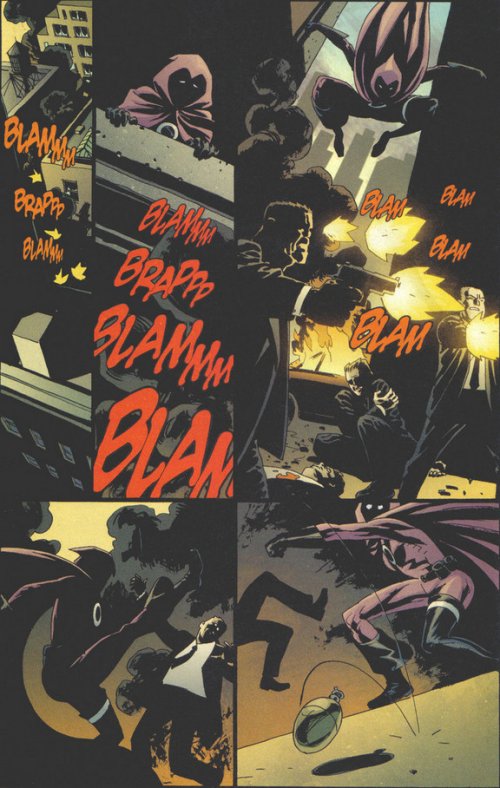 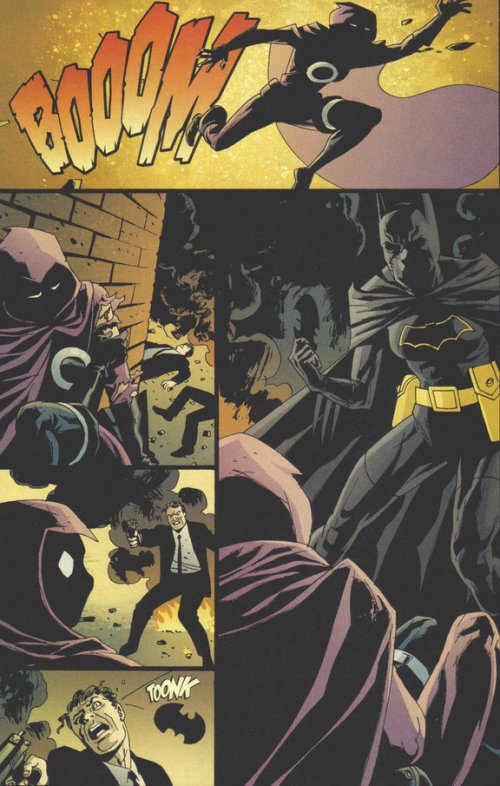 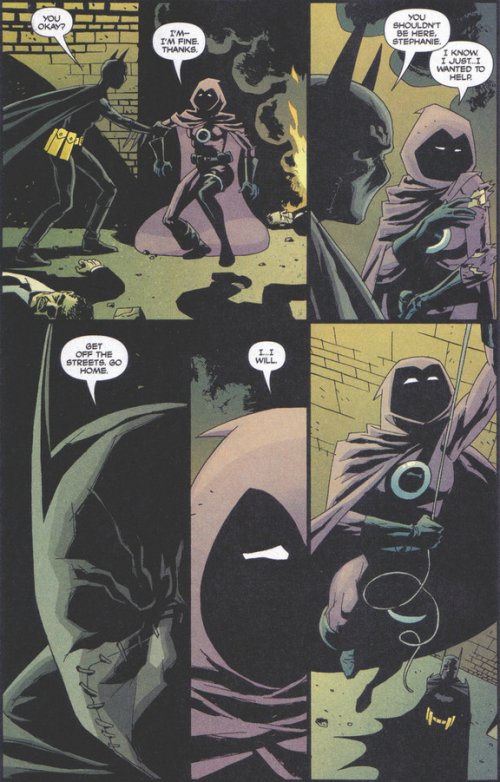 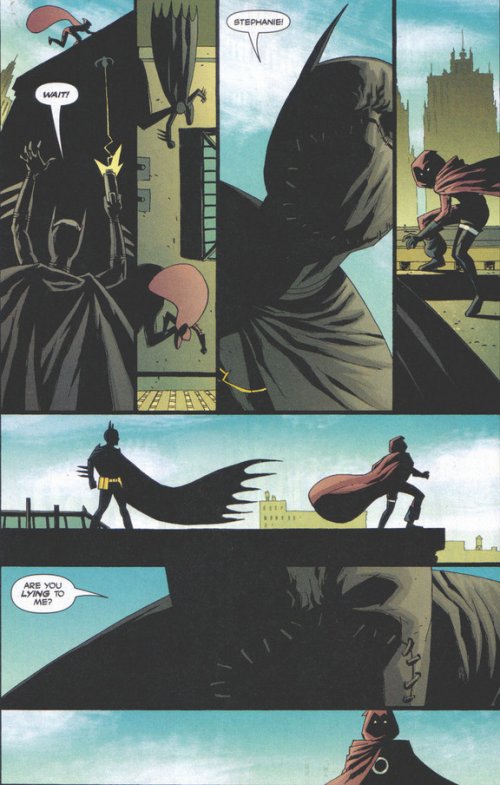 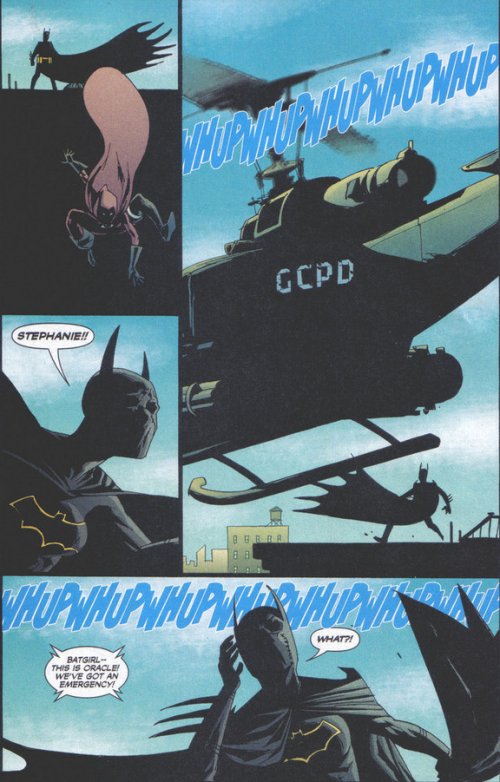 The important thing, is while she's fighting the gang wars, Cass's concern for Stephanie remains. Despite everything else, she will not forget her friend is out there, and if trouble. She nags Oracle about it, searches the city, even bringing a picture of Spoiler e along with her and asking everyone she meets "have you seen this girl?" 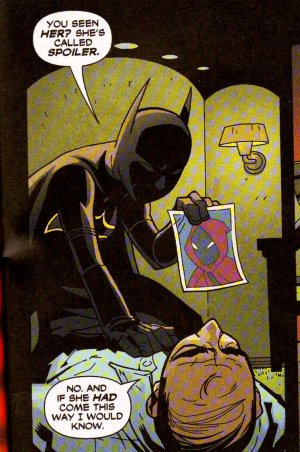 She even asks Leslie, for added irony. 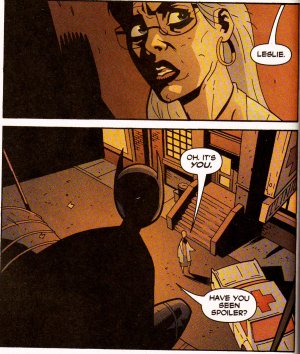 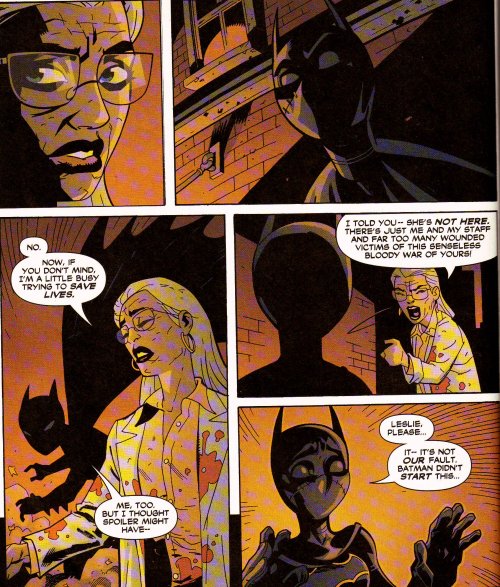 Have no idea what's up with the polka dot scans btw, must be the paper.

Here's a scan of Cass mourning Steph. It is super sad. 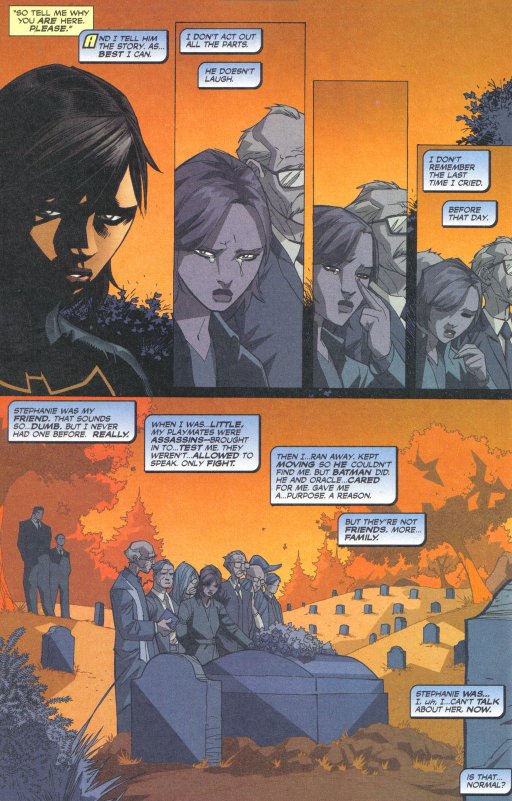 And here's the real meat-and-potatoes: Ghost Steph! Cass has just been exploded into the water by the brotherhood of evil and is about to drown. 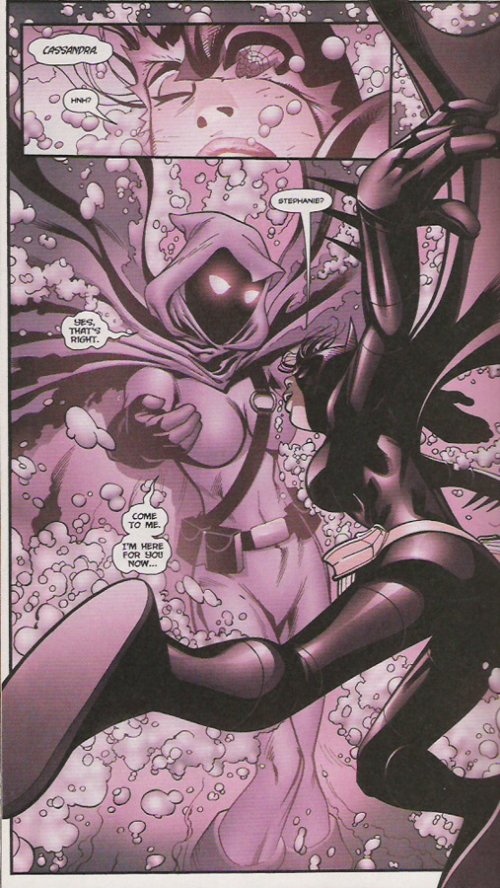 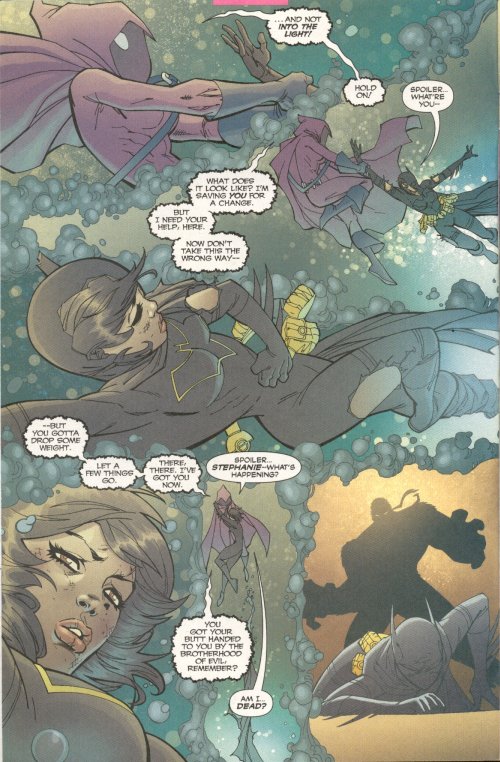 Even "dead" Steph is full of snark. 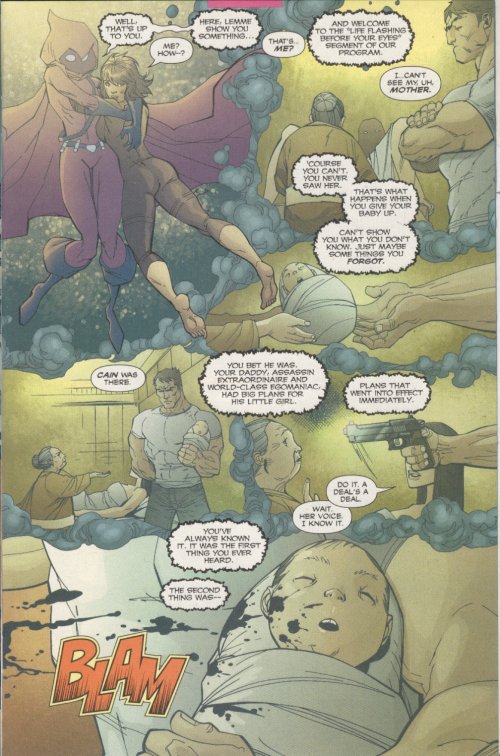 I like the wistful "that's what happens when you give your baby up." Nice detail. 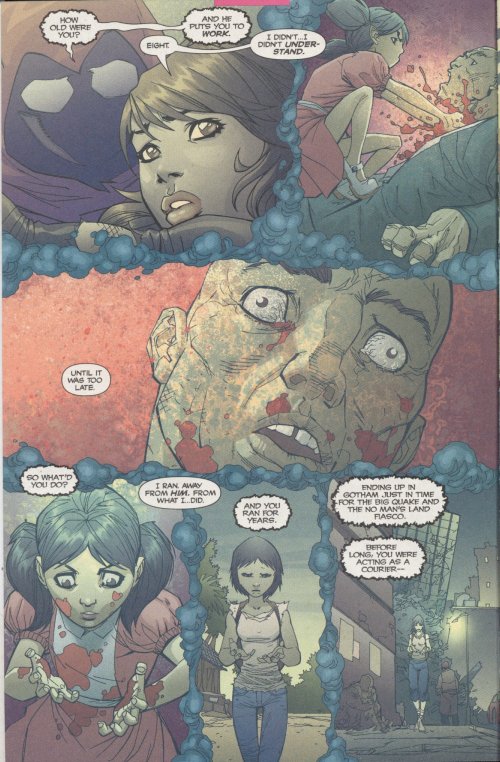 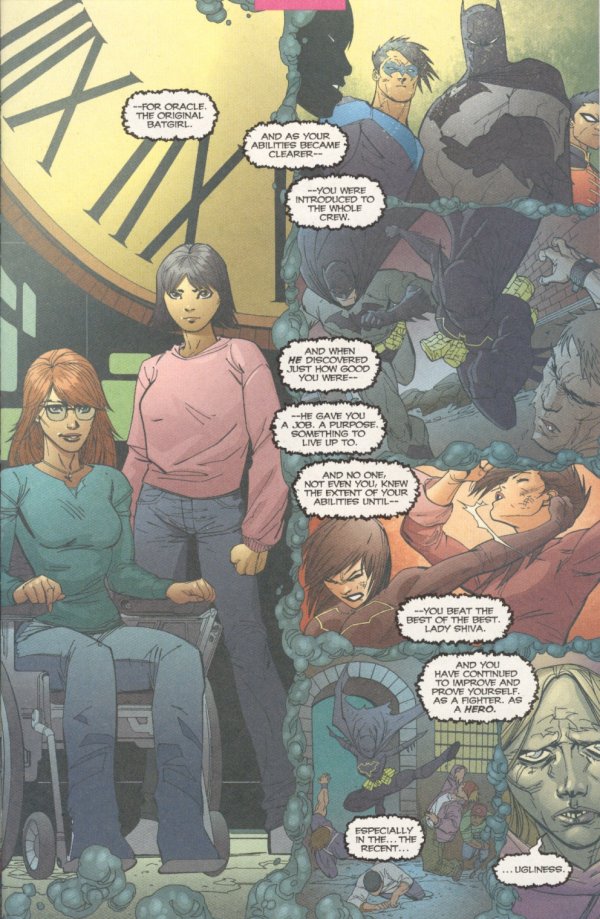 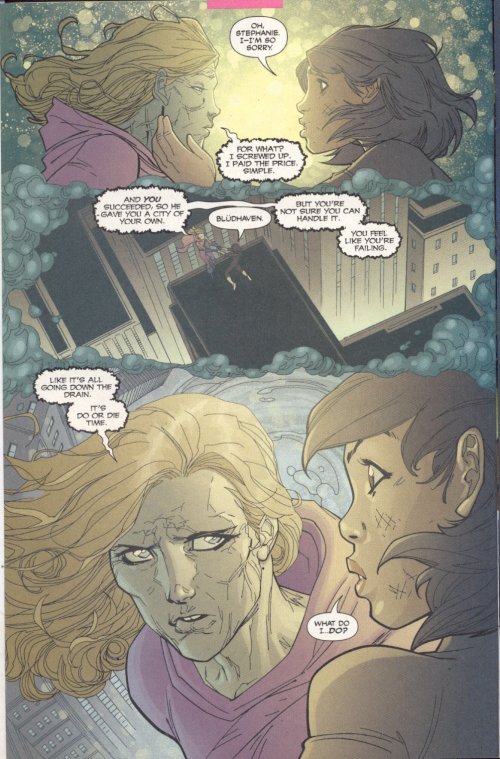 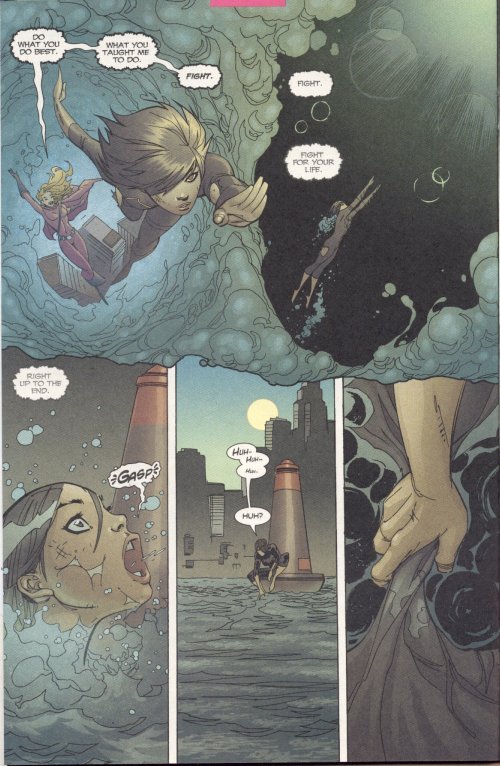 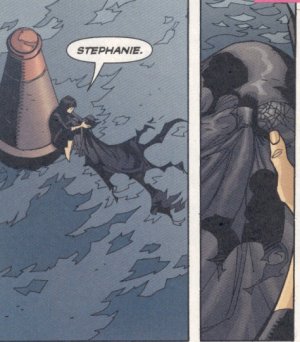 So there you go. Even in "death", Stephanie will save Cass and give her nice motivational speeches. That is the kind of friends they are.

Of course, Cass is bound to meet Spirit!Steph again, what with her dangerous profession. How about when she's actually killed, and only revived thanks to Mama Shiva throwing her into the Lazarus Pit? 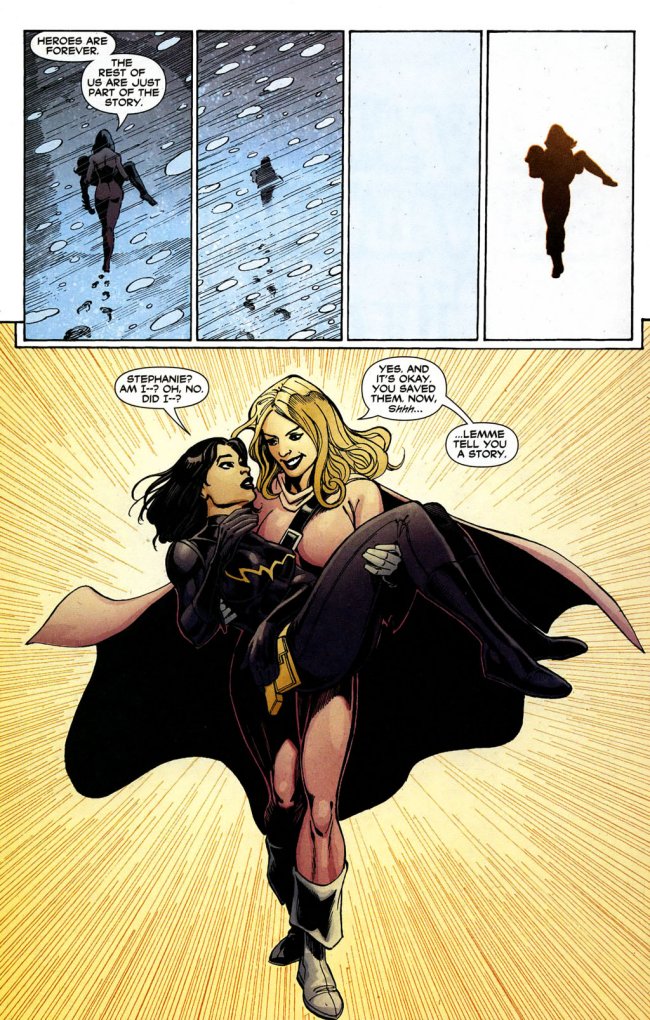 I just love that image, so much.

Basically, Steph tells Cass about how her dad met Shiva (it ain't very pleasant) and... 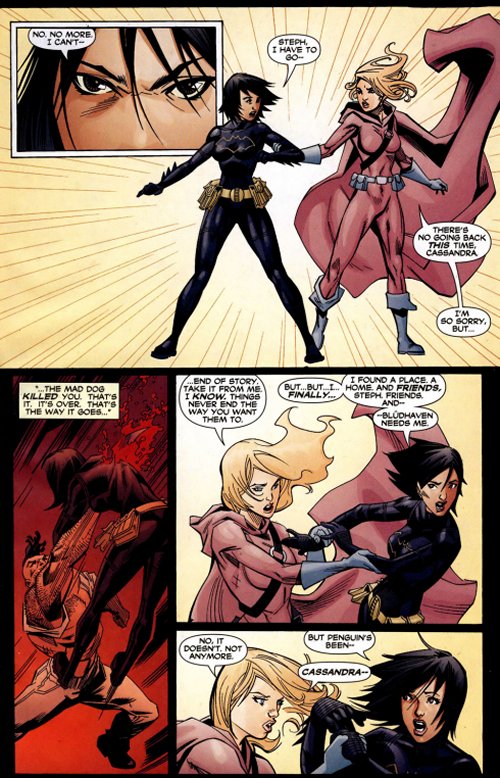 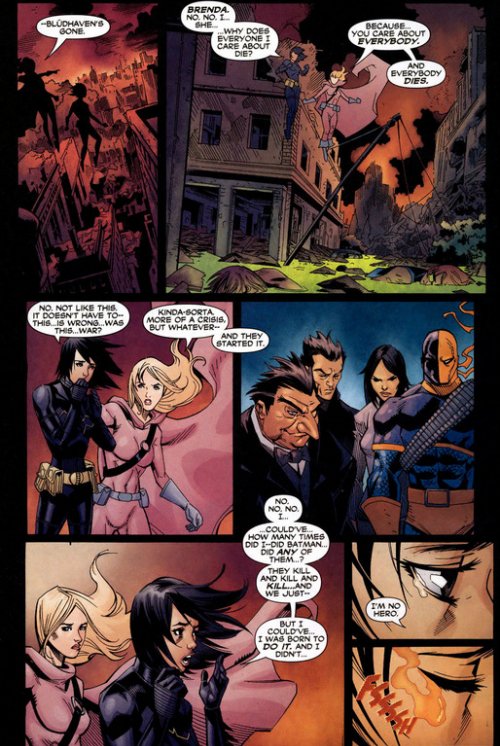 "Because you care about everybody. And everybody dies." One of the best lines in Batgirl, and that series had a heckuva lotta good lines. It's just so CASS, and Steph gets Cass so much that she can have that insight. You'll notice Steph's a more cynical ghost here, I imagine the idea of Cass joining her in the grave has depressed her quite a bit. 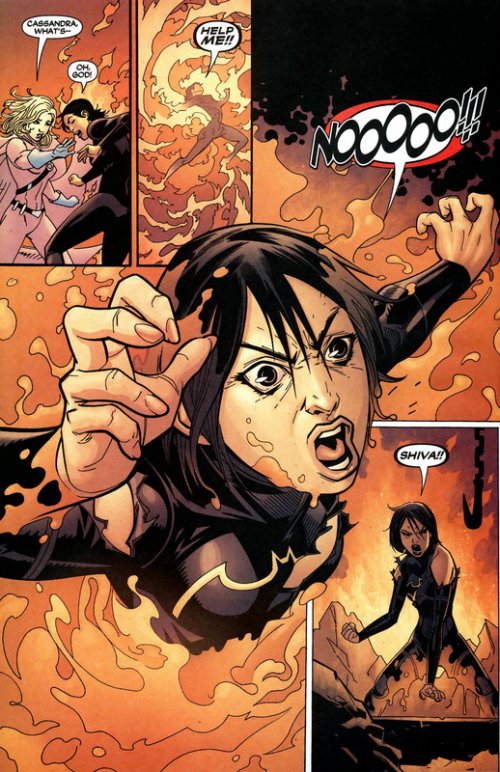 And so it ends.

Now that Steph's back, I suppose we're supposed to assume this was a hallucination, but seeing as Cass was dead and not near death the second time, my theory is that Steph was in a coma for a long while after Leslie took her in, and maybe even went into cardiac arrest and had to be resuccitated. As such, her spirit was roaming around time and space, and was able to help Cass out. She only remembers the experience as a vague dream, once she woke up. Not too crazy for the DCU, right? And that leaves all the great moments there intact.

I offer this as my final proof on why it is a CRIME Cass and Steph have not been reunited yet (for REAL, not WTFTieri style). Oh, and they should have an ongoing together. Or at least a backup. They're MY favorite dynamic duo!