The Venture Brothers - Best crack from Season 3
I got a lot of people making sweet love to Season # 1 & #2 of the Venture Brothers, without getting so much affection for season 3, which is a shame, because that season closed out with truly stupendous CRACK and sheer BAD-ASSNESS!

Because I am almost tempted to start a Venture Brothers week, I will post the episode that had my neighbors complaining from the laughter and "HOLY SH!T" I was saying out loud throughout this episode. If I get good response, I will.

Because the talents behind the Venture Bros. are our kind of people. 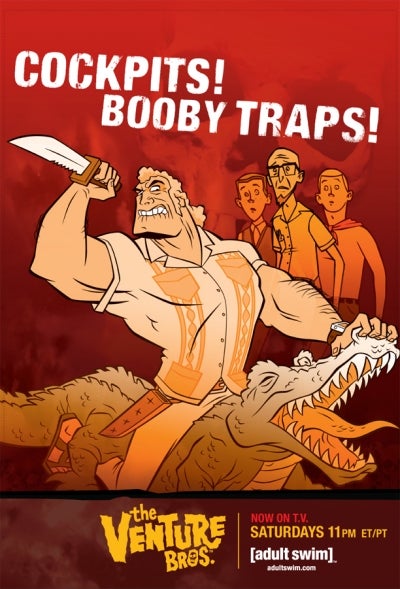 Link behind the cut.


Here is the link to a good video player:

The Family that Slays Together Part 1

I will try to embed the video for those of you who can see it, so enjoy it.

Just to preface the below, for those who have not seen the episodes or have not caught up to the season finale....

Brock learns the real reason he has been assigned to the Ventures not to protect the Venture family, but to protect ORB, an ancient device of unknown qualities and abilities that Dr. Rusty Venture has now been made aware of. Brock's mission, if Dr. Venture was ever to find it and activate it: Kill Dr. Venture with extreme prejudice. Dr. Venture has found the device (after a fun scavenger hunt), but in an amazing bit of seldom seen wisdom and self-sacrifice, he devices the device was hidden away for a reason by his father and does NOT activate it nor sell it.

Brock returns home, failing his assignment, only to go mano-a-auto with his most prized and beloved possession, his car that is operating under artificial intelligence with only one command: Kill Brock Samson. His own agency is now attempting to kill him.

And we return to the action....
**Video Player here. If you don't see it then I did something wrong.**

C'mon Peter, give him a chance. He can be rough, but gentle at the same time. And you know you want a moustache ride.