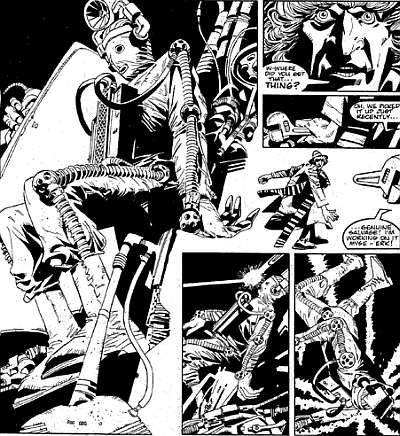 Amusing considering what the Ninth Doctor's reaction to seeing someone's salvaged Cyberman was. Though that was admittedly just a head, I guess.

Also the fact that they allegedly weren't completely coverted into machines yet, and hence are covered in a cloth-like material to keep things in place, was interesting. Though in reality it was probably a budget thing.


Looks interesting, though the Department seems to be very similar to Torchwood in a lot of respects. They even seem to get the same decoraters for the cells.


Hm, I wonder if they'll bring back that Pennywise expy they had in the previous season... OH! Something for those who are interested but don't know, David Tennant's Doctor is going to appear in a two part storyline in either October or November. :) Something to tide people over until they release the next one shot they'd filmed.

More fleshed out information by Icon_Uk below,