Tweak says, "I saw your face and WOW!"

No Country for Spider-Men
I moved from San Diego back to Austin this week, and have not had time to do more Legion stuff. I do like talking about art on s_d a lot, though, so I decided to just repost something from the old s_d.

Without further ado, here is issue #141 of the Spectacular Spider-Man, by Gerry Conway and Sal Buscema (although I strongly suspect the hand of Janson here). 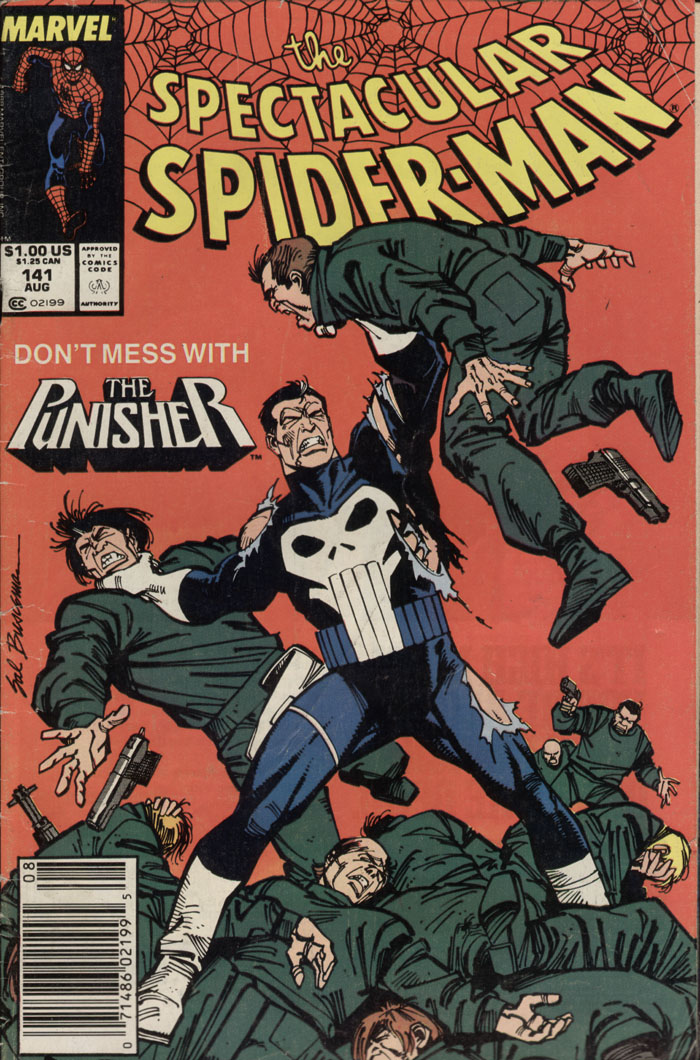 Look out! Frank Castle's thyroid went haywire again! I like this page because it's just a panel from the comic. It's not even colored any differently. Spider-Man's not even on the cover.

This is a story about Punisher that has Spider-Man in it. I don't own the issues before it or after it. A lot of these characters never show up again. The coolest character never even meets Spider-Man. I'm not sure who they are or what happened to them, but I wish them all the best.

Taken alone, this seems to be a short tale about the futility of violence, and old troubles that never go away. It's called "The Tombstone Testament," and you can call it that if you want to, but I prefer: "No Country for Spider Men." 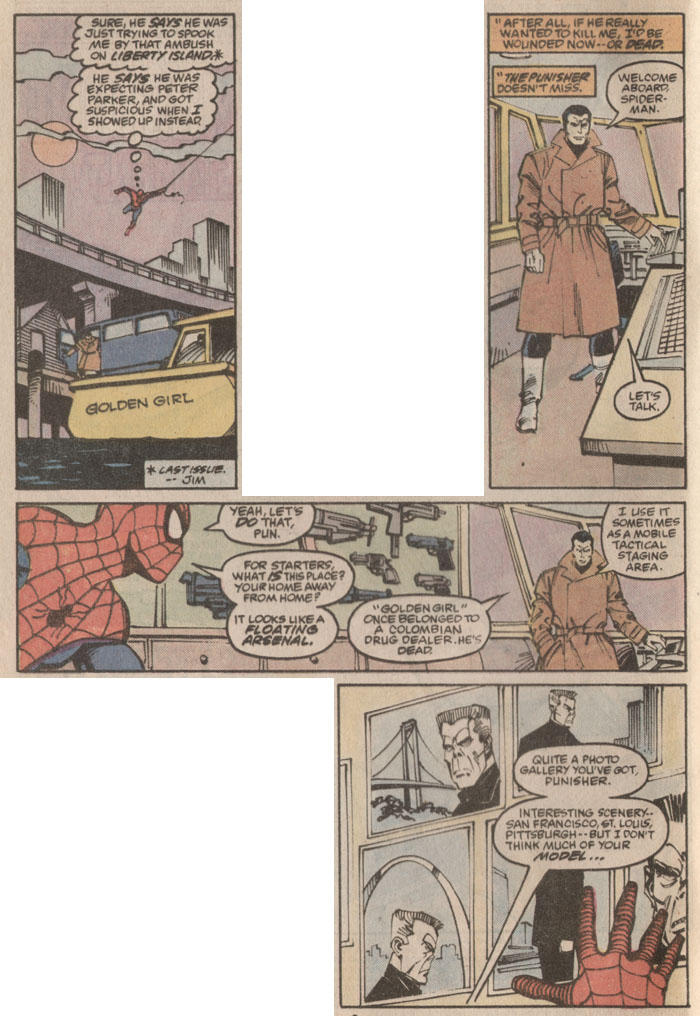 What is this guy, some sort of tourist?

Note the pattern on Spider-Man's hand. There's a little oddness around the thumb but that's no big deal, few artists even dare to try for close-up of his hand. 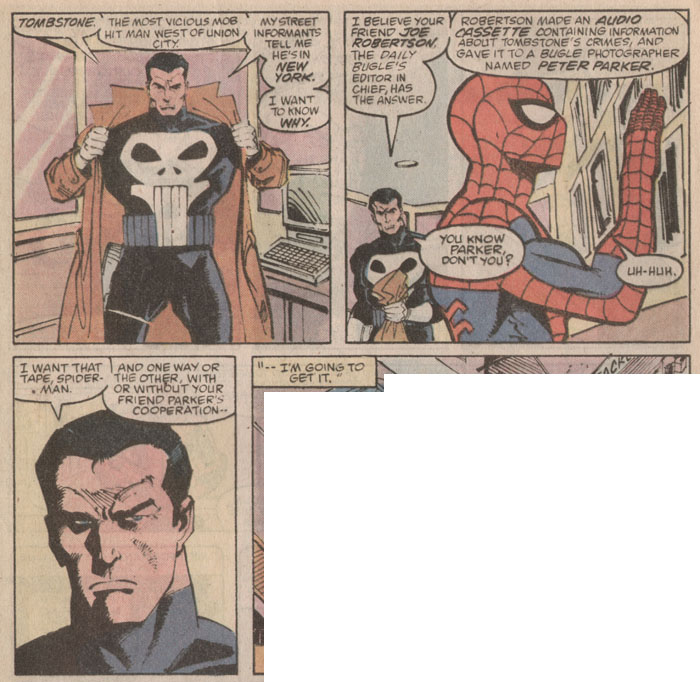 Frank Castle nervously picks guns up and puts them down again as he talks about what a bad mother#^*&%* Tombstone is. Spiderman stands on the furniture and says, "uh-huh. Yeah? Then what did you say?"

Basically they explain stuff that (probably) happened last issue. Frank thinks Peter Parker has the tape. Spider-Man promises to try to get it for him. Tombstone lurks outside and says villianous stuff. All this happens at eye level in medium shots. The artist got paid and everybody's happy. 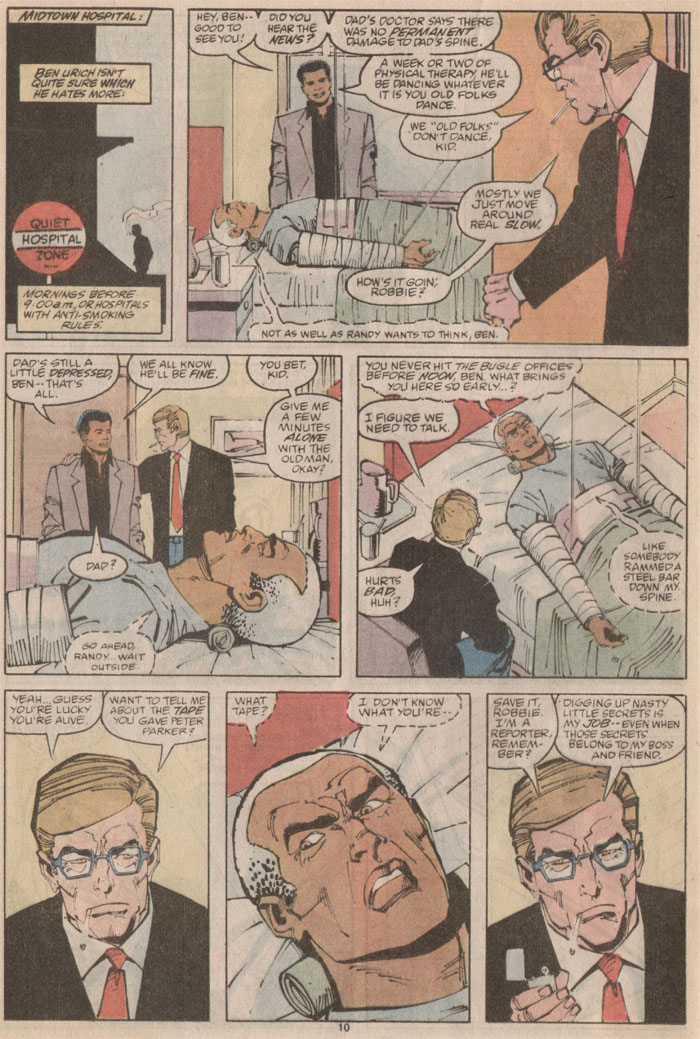 This page has very good composition. In fact, the whole issue is a perfect example of good, clear, direct comic book storytelling. Elements are arranged with straight lines in clean blocks. No nonsense. This is the Brian De Palma style of comic art. Direct and unembellished. It's not exactly at eye level, it's more accurate to say that elements are arranged for best storytelling potential and then rendered at approximately eye-level. 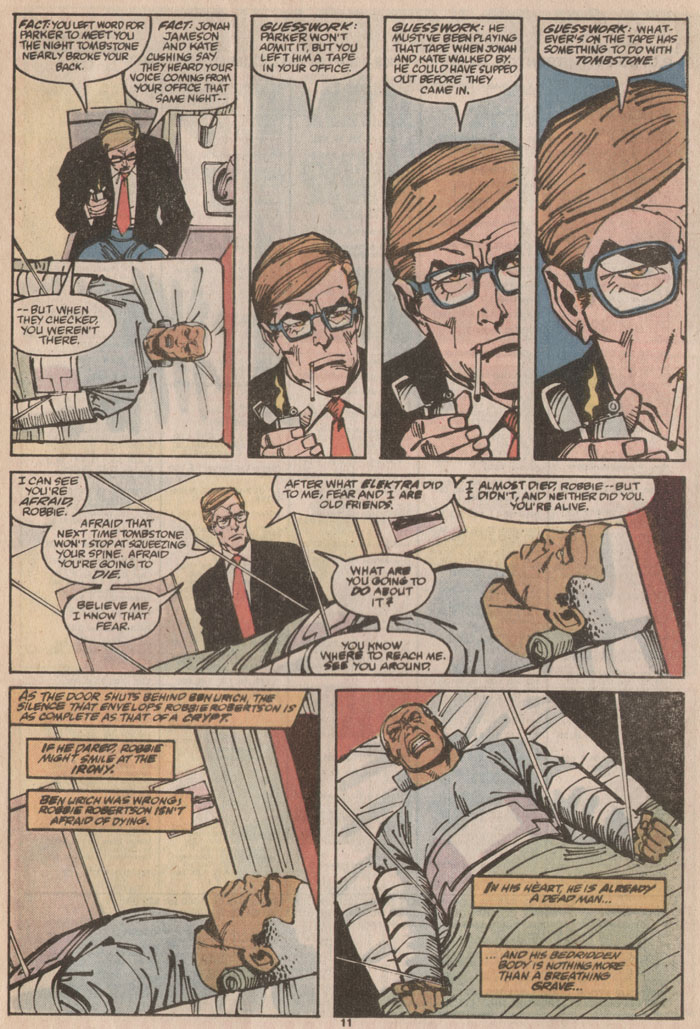 These two pages are odd examples because they have Robbie, paralyzed and trapped in a hospital bed, his poor tortured body used for all sorts of storytelling devices. He essentially spins 600 degrees in these pages. Ben, on the other hand, sits there and watches him. Strange, if you think about it.

Also, Ben, what the godDAMN are you doing smoking a cigarette in a hospital? I'm pretty sure that was illegal in 1988.

Here's the eye-lines on those two pages again. 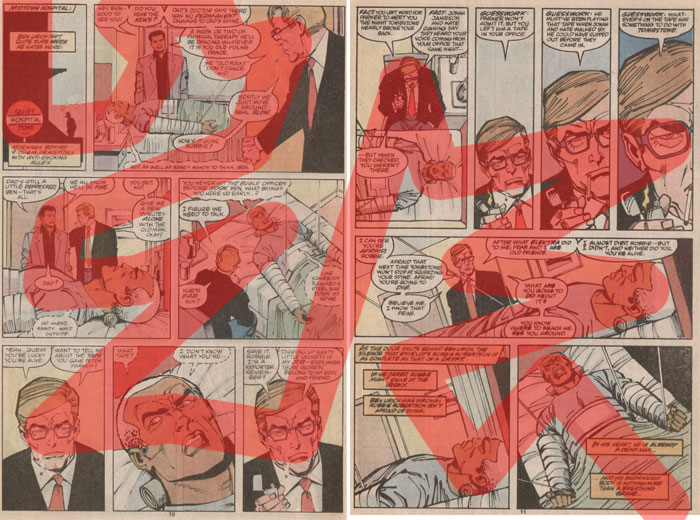 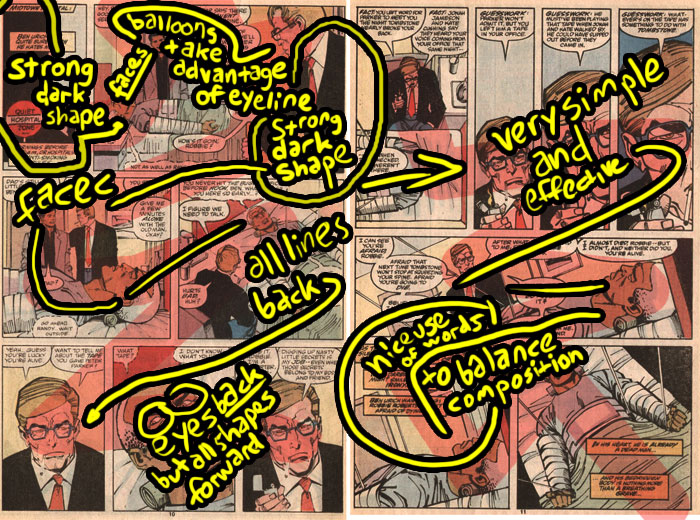 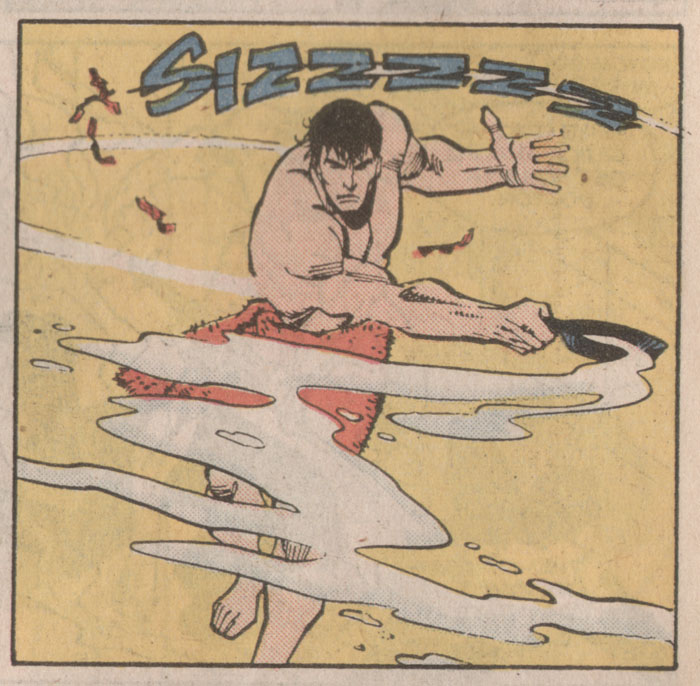 He kills someone with it. It's pretty cool. Meanwhile, Peter and Mary talk about something else in a conversation that has now been erased from history. 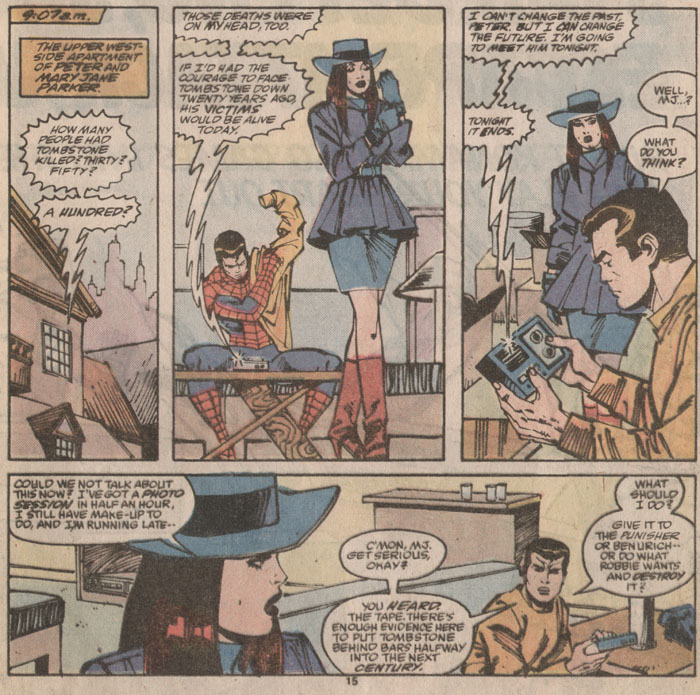 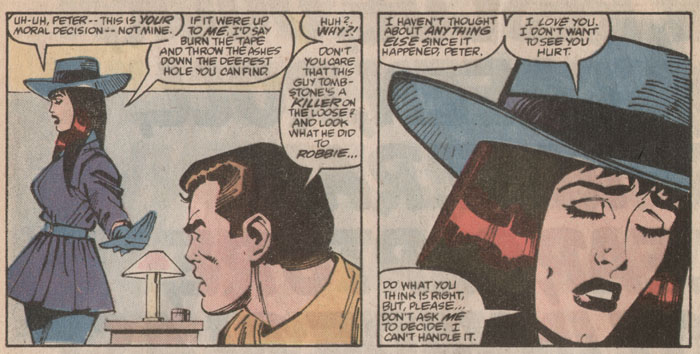 History's loss, I guess. Meanwhile, the Punisher visits a museum.

Sounds like an excellent reason to kill a lot of people. So Frank does. But violence is futile, so I didn't scan those pages. 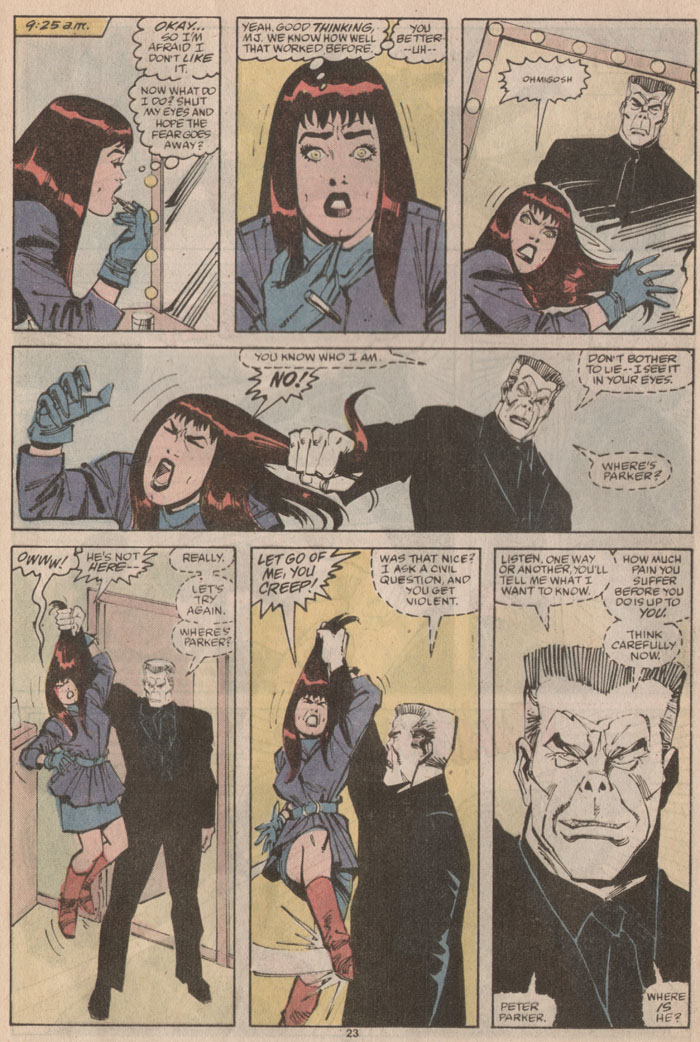 Modeling can be a rough business. Who's prettiest now, Mary Jane? Say it!

I imagine that Tombstone's voice sounds like Miles Davis.

It could be said that MJ gets fridged here but I have to point out that everyone in this story gets fridged for the Punisher, including Spider-Man. It's only Ben Urich that escapes unscathed (although he did smoke a cigarette in a hospital, so he probably has cancer now.)

Meanwhile, the guys from the cover are mentally rehearsing their excuses for why the Punisher has punked their candy asses for eighteen pages straight. 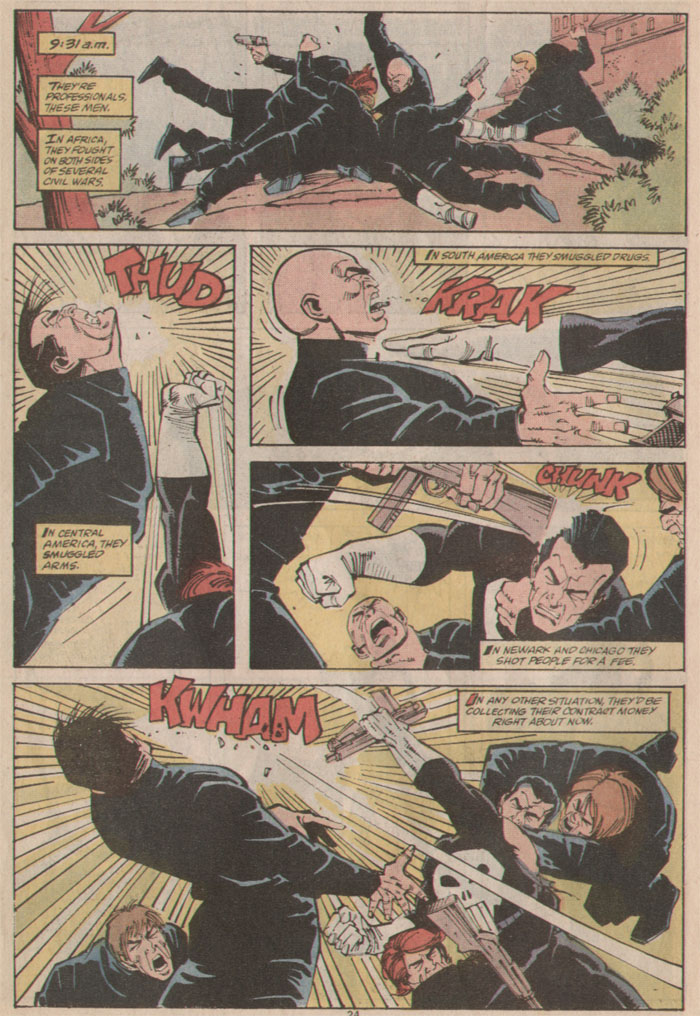 That's a hell of a punch there in the last tier, and I'd also like to draw your attention to the right hand of the guy pistolwhipped by Frank. He has five fingers yet that is somehow too many. Either his hand is too wide or his thumb is on wrong, it all looks perfectly realistic and yet very weird. If you traced directly over a photograph you might still get a result like that. That's one of the tough bits of comics art right there; something can be right and still look wrong. Sometimes real life just looks wrong.

Anyway, the Punisher beats on them for a while... 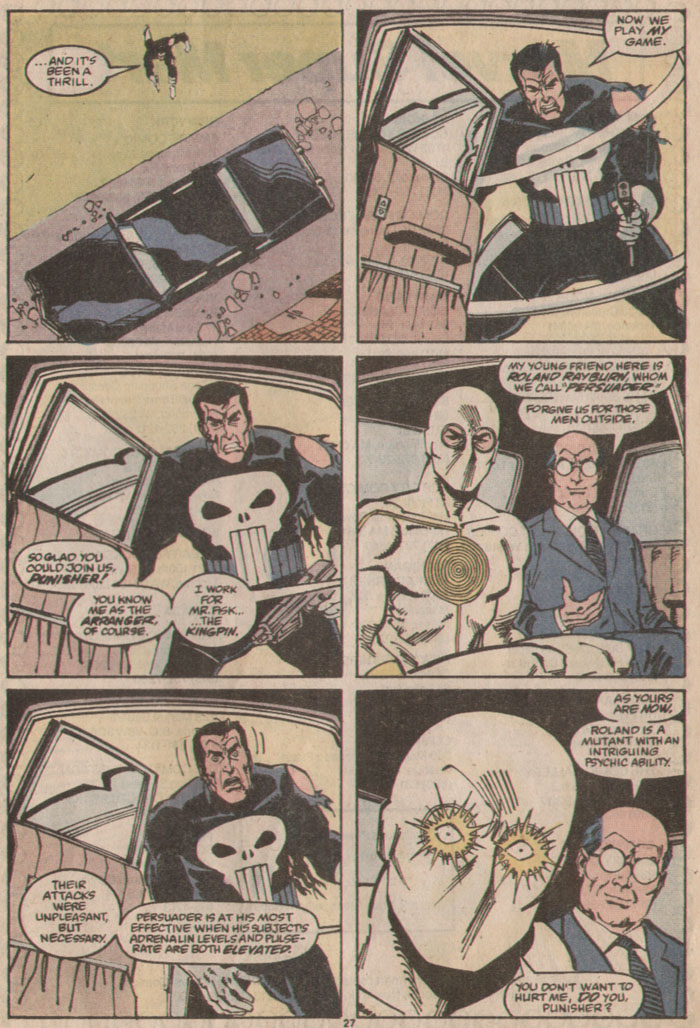 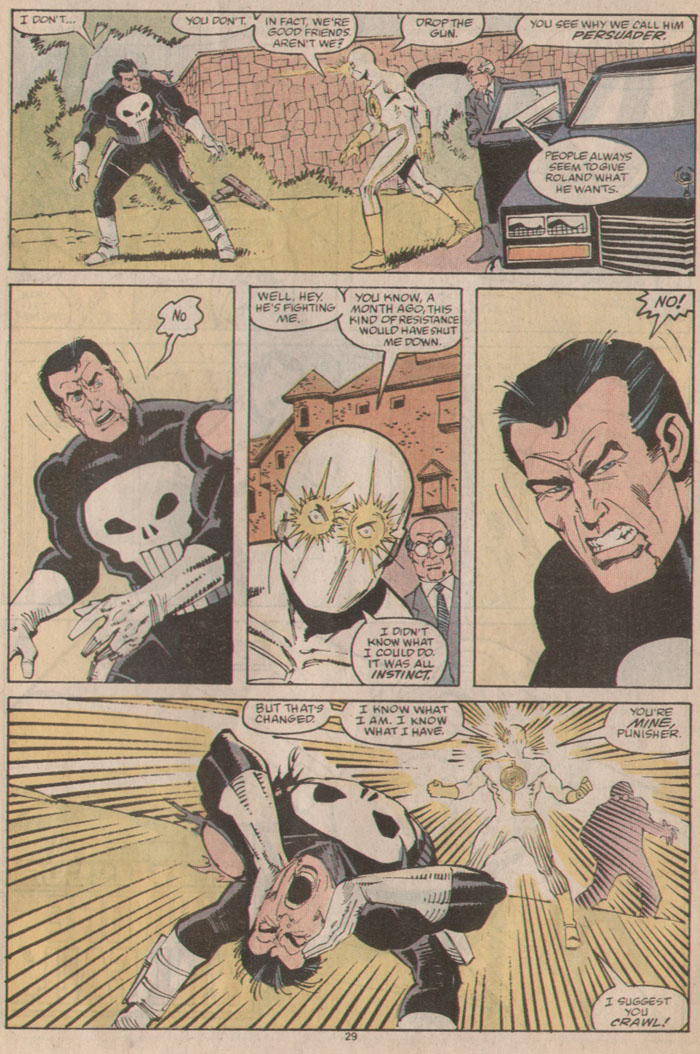 NOOO! NOT CONVERSATION ANYTHING BUT THAT

I really like this guy. Not only does he have a wildly uninspired yellow jumpsuit and glowing eyes, but he can make Frank Castle holler like a cowboy. That old dude is the Arranger, who used to be the Kingpin's lieutenant back when the Kingpin was cool and made sense. The Arranger was a funny motherfucker and I always wondered what happened to him.

That's the Cloisters behind them. See? Aren't you glad they went someplace nice to kill each other?

Meanwhile, back in Spider-Man's portion of his own damn comic book: 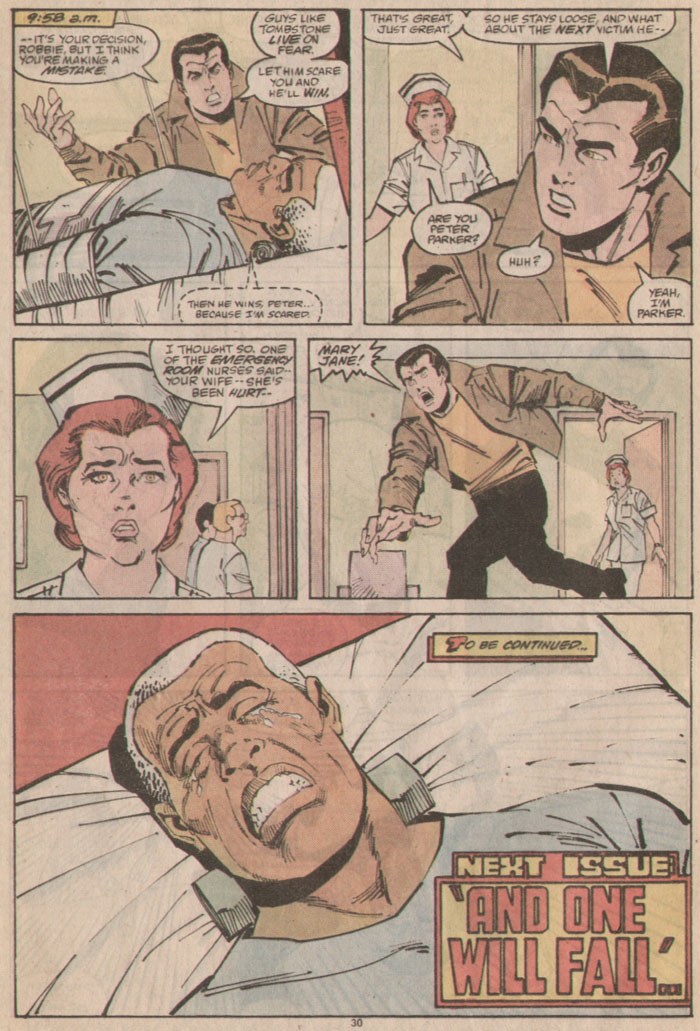 What happens next? It's magic! We don't have to explain!