The Legion: Idiots Without Feelings 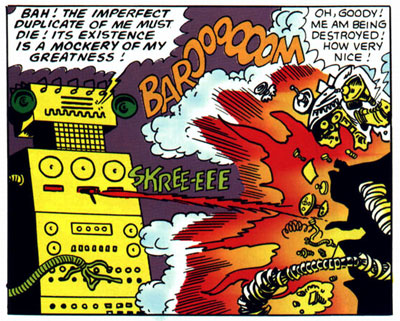 So much wrong, so little I can post. But I'll do my best.
So, today my thesis is the Legion are fucking idiots. Here is evidence.

Finally looking at the famous first Computo story, I have to say: I never realized just how stupid the Legion were. And how heartless. And how flip they were with the issue of death and mutilation.
So, Brainiac makes Computo. Computo makes more Computos. Marauding giant robot war ensues. Well, not much of a war, as apparently they have no fucking defenses against giant robots in the 30th century. 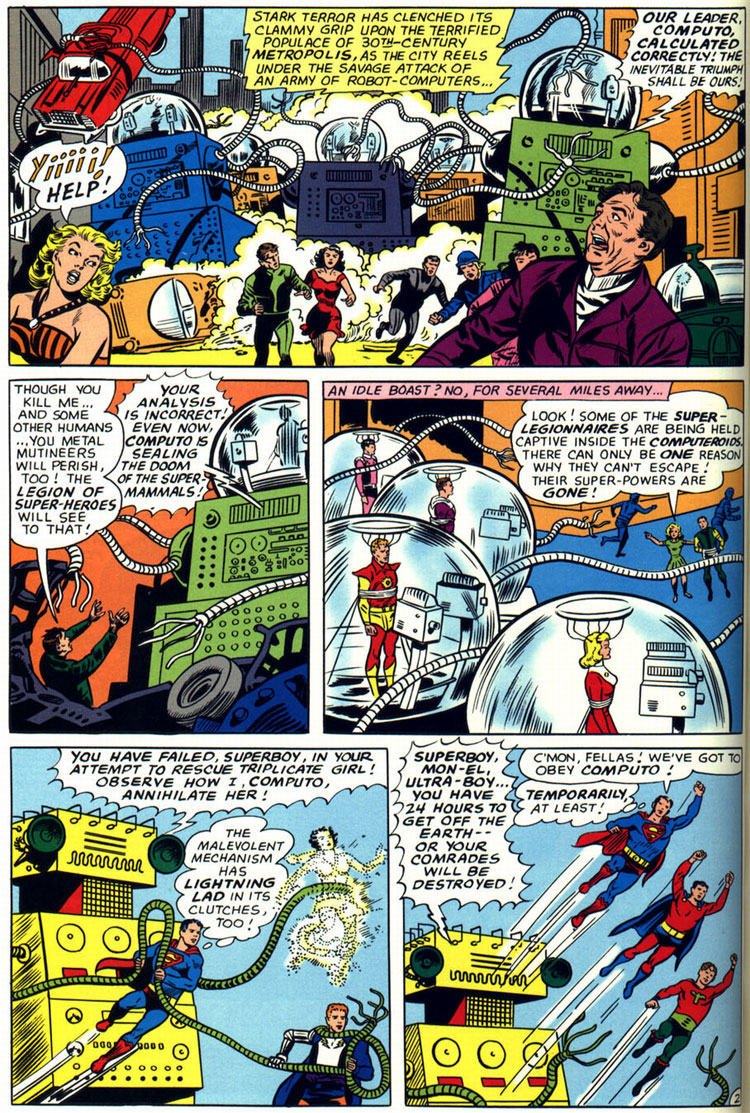 That's right, in case you'd never seen the actual incident: blink and you'll miss it, the death of Triplicate Girl. Oh, they do have a funeral. And I ask you to pause a moment and enjoy a truly cracky panel. And look, they comment on the amusing irony of someone's death right on her marker! Her folks must have loved that. I guess these ARE teens. Dicks. Anyway... 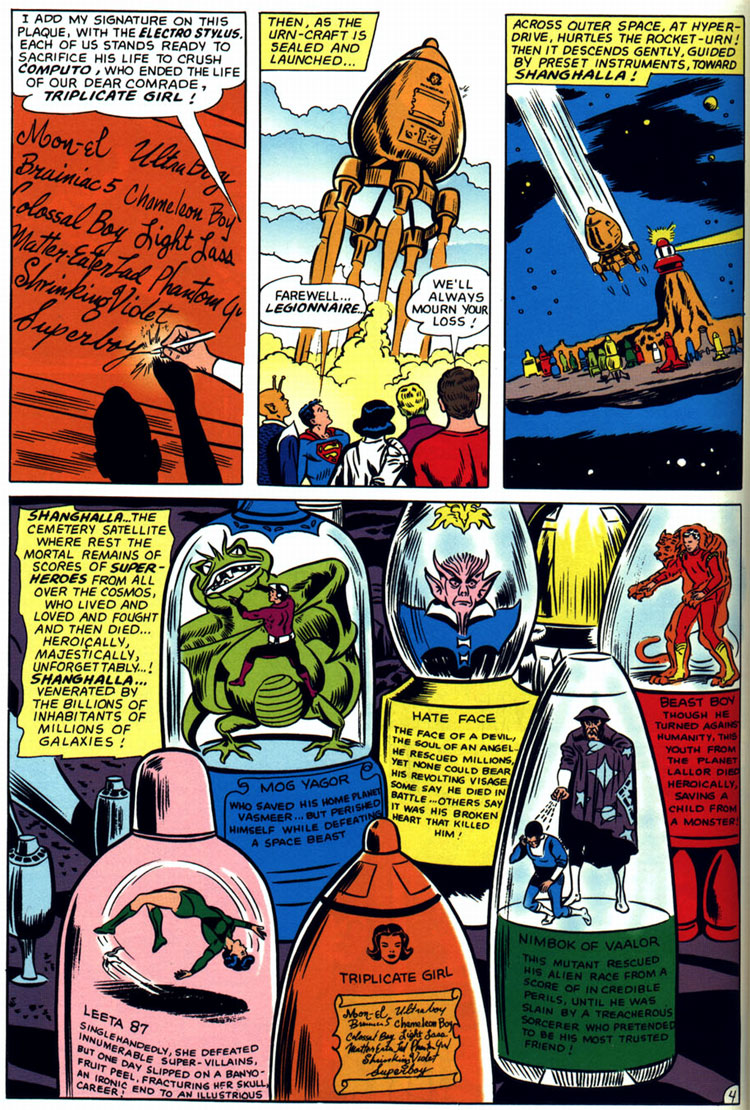 Hate Face. I want a story with Hate Face.
But hey, it's okay! Only one of her is PERMANENTLY DEAD FOREVER. But no big whoop, just a change of name, and judging by her smile, some really good drugs, and they're set! And we finally realize why they let her in: cannon fodder. 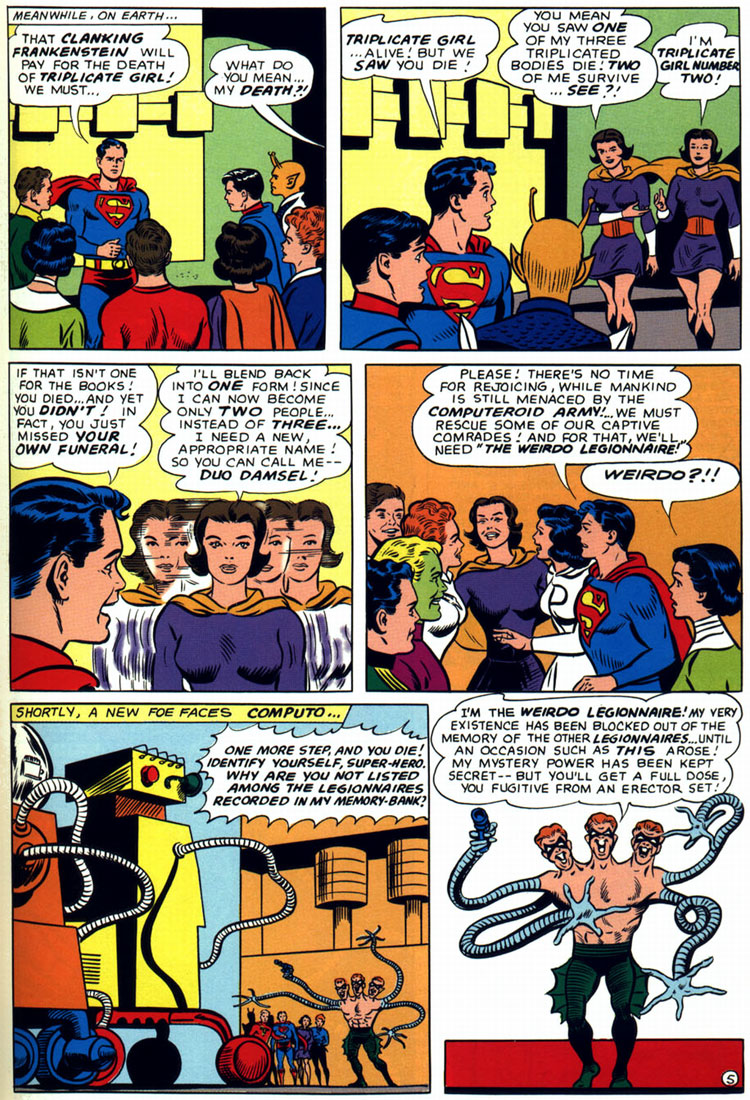 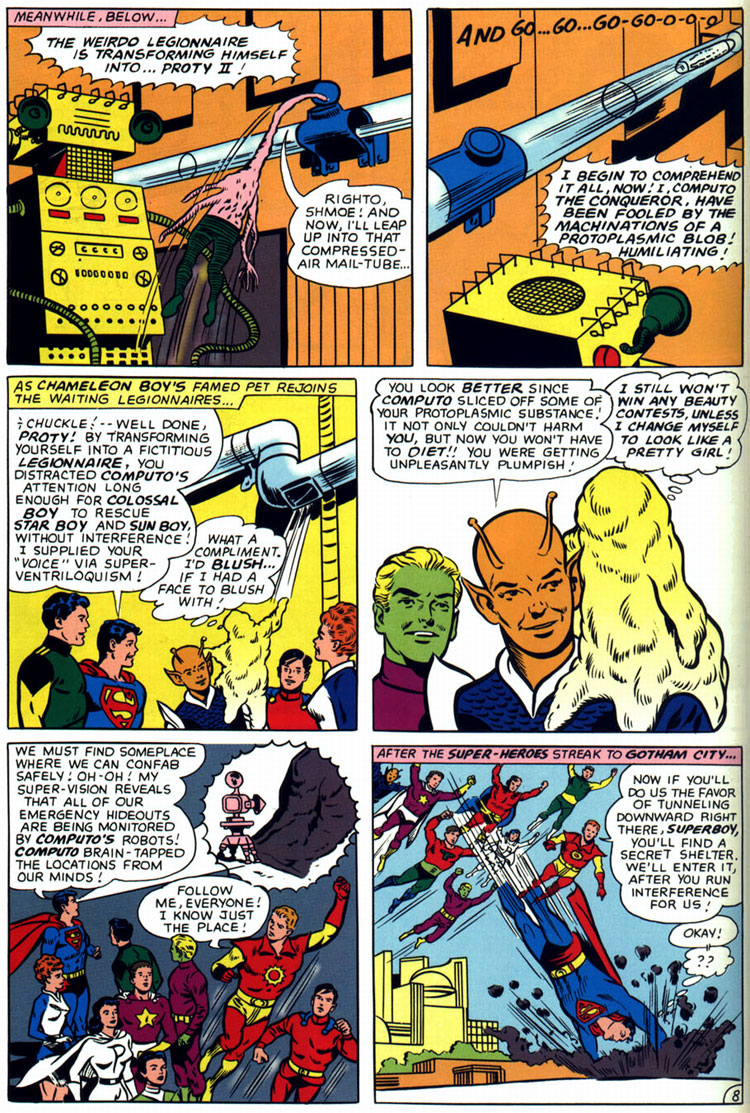 And here's the Legion destroying time. Seriously, dicks. (yeah yeah, he gets mindwiped, but still) Also: apparently Superboy now thinks the Penguin will be an actual penguin. 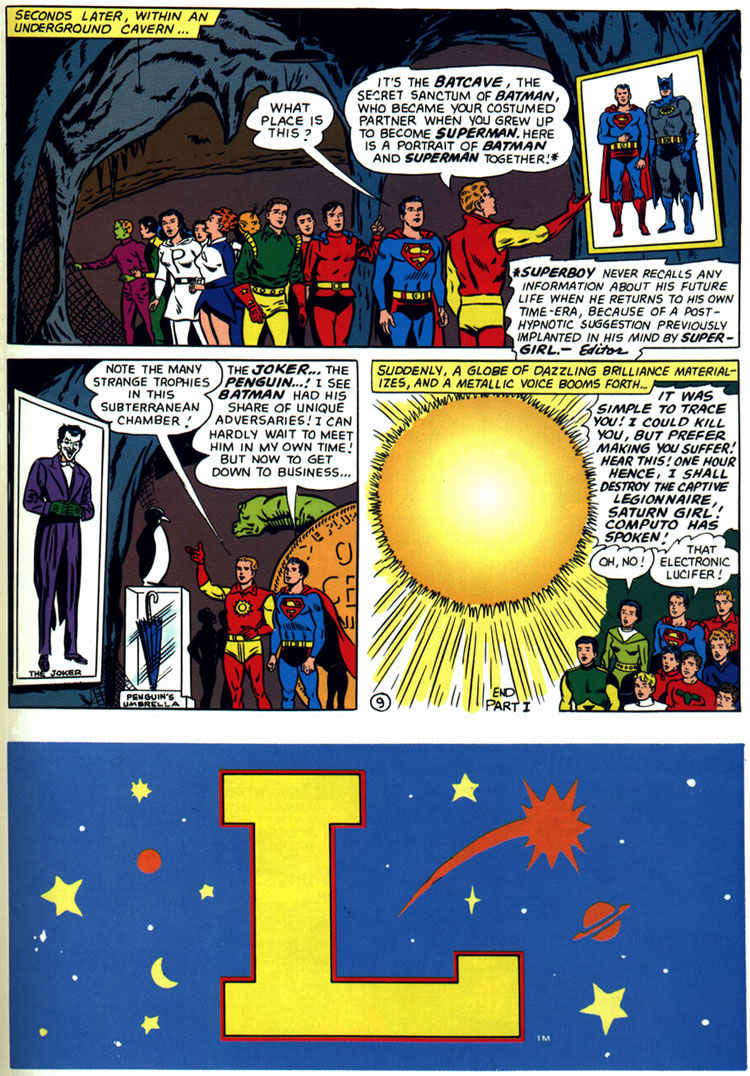 And then they let Brainy make something else! I will nickname him Badly Drawn Robot. And...we decide to stop making sense altogether. 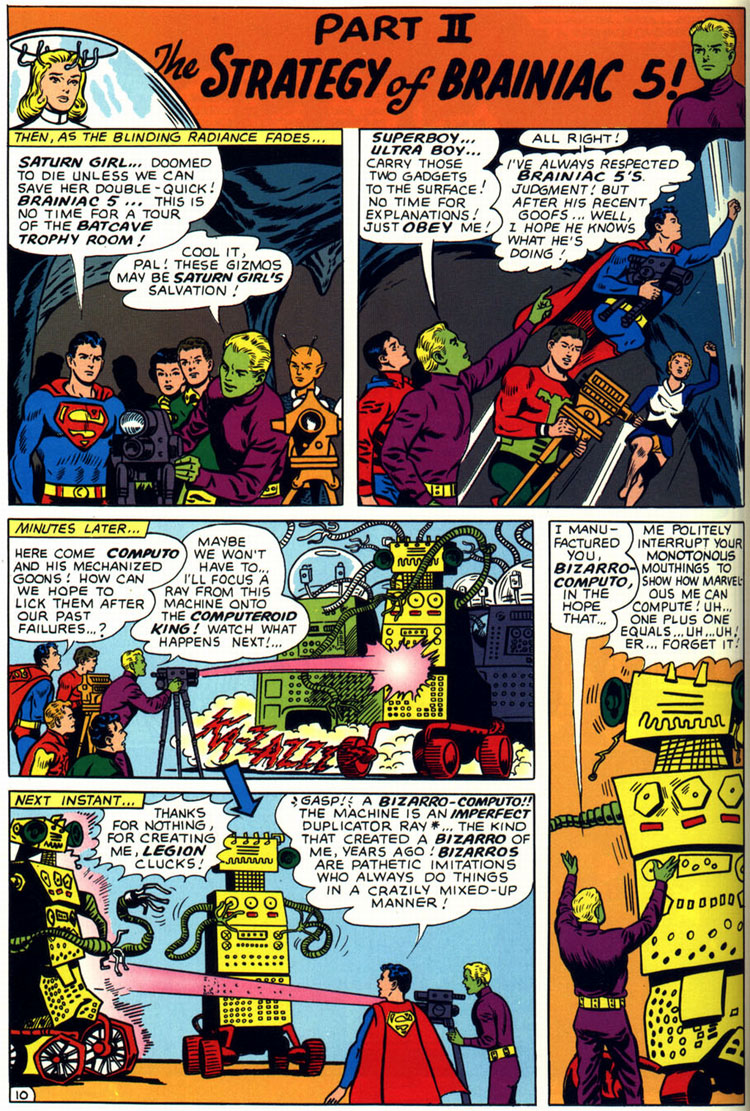 I remind you: Brainy's power is being smart. 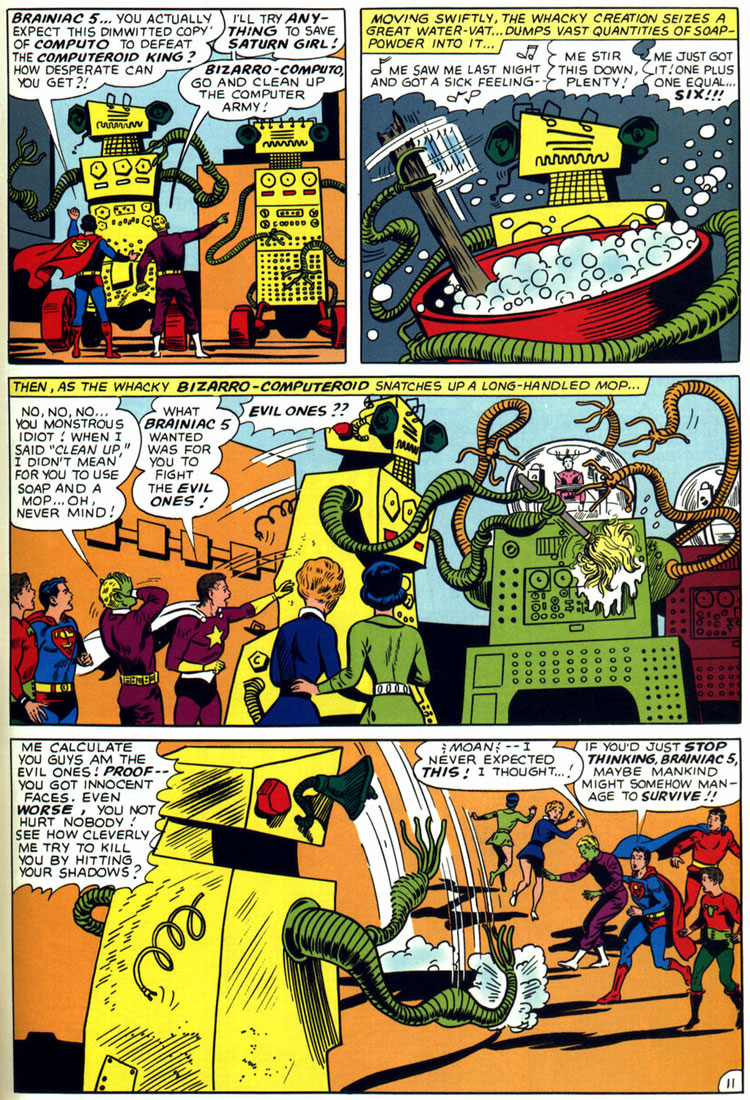 In conclusion, ladies and gentlemen and all in between, the Legion are fucking idiots, and dicks on top of it. I thank you for your time.